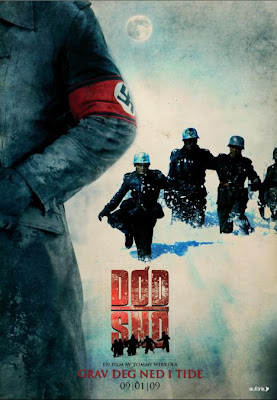 Instantly scoring a place on my 'must-see' list, the upcoming Norwegian zombie movie Dead Snow (just accepted into next year's Sundance Film Festival) puts me in mind of 1977's Shock Waves. Directed by Ken Wiederhorn, Shock Waves introduced the world to the unforgettable sight of Nazi Zombies who lived underwater, striding out of their watery grave to stalk a group of fun-seekers on a diving cruise who find themselves stranded on an island occupied by Peter Cushing an an old SS Commander. Shock Waves was one of those movies that could stop viewers in their tracks if they ever came across it on late night TV. As movie monsters go, the prune-faced zombies - still sporting their full SS uniforms and dark googles - made for an awesome sight. 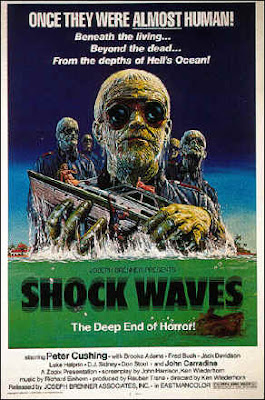 The zombies of Dead Snow don't look quite as striking in comparison, but they're pretty cool nonetheless. My only complaint so far about Dead Snow would be the nerdy gripe that I wish it was more serious than comedic -I'd rather see a Nazi Zombie movie that was trying to be genuinely scary rather than a Raimi/Jackson-style gross out - but like I said, that's a nerdy gripe to make. At the end of the day, I'll take Nazi Zombies anyway I can get them. That's how I am.