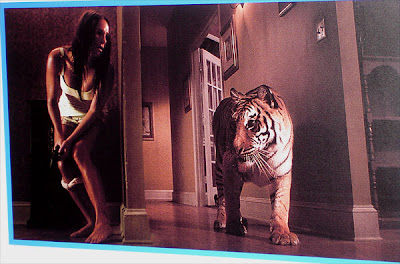 With our son's presents laid out under the tree and the wife having headed to bed early, I whiled away some time in the minutes before the clock struck midnight with a quick browse of the internet only to learn - courtesy of Ryan Rotten's 10 Most Anticipated Horror Films of 2009 - of a film that sounds too good to be true. A film that I had no inkling of until now but I know will go on to consume my thoughts until I've seen it. It's called Burning Bright (formerly known as Tiger, Tiger) and the story involves Step Up 2's Briana Evigan trapped in a house during a hurricane along with her autistic brother as a tiger is also trapped in the house with them.
While I'm sure my eyes will light up at a few of the presents I receive tomorrow and even more so at my son's reactions to his Christmas Day it'll be hard to match the wave of joy that instantly poured over my face when I read the plot description for Burning Bright. Why does it make me so happy to learn about this movie? I couldn't say, it just does. A hurricane, an autistic brother, a tiger - I don't even need a set-up for that. Nothing about how the tiger got there could possibly interest me. Just have it there as soon as the movie begins, please.
As of now, there's no release date set for Burning Bright but I hope Lionsgate makes it a priority to get it into theaters in '09. The only thing that could possibly make me more excited about this movie is if it were called Burning Bright 3-D. It wouldn't even have to be in 3-D, man - just to have it in the title would be enough.

In the face of such good news, it'd be wrong to get too greedy.
Posted by Jeff Allard at 8:44 PM

You know, I agree with you about not knowing how the tiger got there and just starting with it straight away. That would be quite a scary setup; made more so by the bizarre WTF? how'd this happen? situation. Mystery lends horror a leg up on the terror aspects, especially when unexpected and out of place.

Of course what'll more likely happen is that the tiger will only be in the house for the last act of the film - and only after a long, tortured build-up as to how it got there in the first place! I love the idea of two people trapped in a house with a tiger in the middle of a hurricane just because it IS an absurd, WTF situation - to have to jump through too many narrative hoops is just going to suck the life out of the movie.

It sounds like it has mega potential even just do to the fact that the 4 participants are an unusual mix for a horror flick.