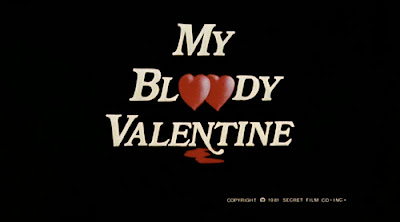 In the early '80s I was too young to see any R-rated movies in theaters but that only caused the films of the slasher cycle to loom all the larger in my imagination - often helping pedestrian films take on legendary proportions.

Films like Terror Train, Friday the 13th, and My Bloody Valentine weren't the kind of horror films that I had grown up watching afterschool on The 4 O'Clock Movie or on the Saturday Creature Double Feature. This wasn't Godzilla stomping Toyko, or Peter Cushing's Van Helsing sticking it to Dracula. There was no element of fantasy to be had. I had already seen Psycho by then (although I wasn't even aware of films like Texas Chainsaw Massacre and Last House on the Left) but Psycho had that buffer of being, well, old. It was scary, yes (as a latchkey kid in the '70s, I watched Psycho for the first time on afternoon TV alone in the house with literally one foot out the front door during the film's scariest parts so I could feel I wasn't 'shut in' with the movie), but it was a "classic" - meaning that it was in black and white and that I read about it in books long before I saw it. I mean, my mom saw it when she was a kid - or at least a teenager - herself so I knew I'd be ok, no matter how scary it got.
But these new slasher films were changing the game. It was like a mean season had come. By reputation, slasher films were nothing but one brutal death after another. And from the TV commercials I'd been exposed to for the likes of He Knows You're Alone, they didn't even have that gloss that I always associated with movies - even by the standards of the more realistically-shot movies of the '70s, slasher movies seemed to be even more void of artifice. Without fail, every TV spot for a new slasher film would leave me traumatized. They never looked hokey to me, only harrowing.
Appearing more harrowing than any of the others was 1981's My Bloody Valentine. From the TV commercials, it looked hardcore - even before I was inclined to use words like 'hardcore'. There was something instantly unnerving about the killer's miner gear outfit with the gas mask and the blinding flashlight mounted on his helmet (which had the effect of freezing his startled victims like deers in headlights). This guy wasn't trying to look 'spooky' or to play hide and seek behind some shrubs, he was dressed to get in there and end you. And the clip from My Bloody Valentine that I saw on Siskel and Ebert's Sneak Previews was terrifying to me. It was the scene where Mabel, the old lady at the laundromat, is murdered. Seeing how helpless this tiny old woman was against the killer really disturbed me. Unlike most of the horror films I was used to, there wasn't anything 'fun' about that scene. I had seen many people victimized in horror films before, of course, but seldom did it seem so mean-spirited. So, well, heartless. And it because it was an older woman as the victim, there was nothing even titillating about it - it wasn't a 'damsel in distress' type of scene, it was just vicious.
The victims in Psycho never had time to plead for their lives (although the suddenness of the attacks in that film is what makes them so frightening), but the victims in slasher films always seemed to. Often times these characters had plenty of time to know exactly what was in store for them and go through the whole gamut of emotions. Scenes like this were new and upsetting territory to me. Sure, I had seen victims whimper and beg in terror before but usually it was in the presence of something absurd like a giant ant or whatever. But to see a hulking dude with a pick-axe attack an old woman and to hear the character react with real fear to this inexplicable thing happening to her ("What do you want?! Go away!") was chilling. By 1981 this was far from anything new to horror films, of course, but at my age I was seeing it for the first time. To my mind, My Bloody Valentine was a lock to be the scariest movie ever made. Hell, I couldn't even get through the 30 second TV commercial without leaving the room.
I don't remember when I eventually saw My Bloody Valentine in its entirety but I know it was on home video, which would've likely made that the mid-'80s for me. Inevitably it wasn't quite the terrifying experience I had expected (of course I had already become a jaded splatter fan by then!) but I still loved it. It followed the cliches of the genre enough to make it an archetypal slasher film but it had its own characteristics, too, like the working class atmosphere of its mining town and its love triangle subplot (a familiar movie staple but one rarely seen in horror films). But even if the movie itself didn't rewrite the book on horror, when I think of My Bloody Valentine I always think of how my earliest glimpses of it represented a new kind of horror film to me - one that would take no prisoners. In reality, it was very far from being that but to feel so threatened by a movie upped the ante and forever changed the way I thought about horror.

Next month, not only is the 3-D (!) remake due to hit theaters (coming in on a wave of positive notices) but the original will finally be able to be seen in all its uncut glory. I'm not sure which has me more excited. But while the original My Bloody Valentine may not have been the ruthless film I expected to see when I was eleven and fleeing from the TV commercials, it continues to have a place in my heart. Like the lyrics of "The Ballad of Harry Warden", it reminds me fondly of "the horror from a long time ago."

I'm very happy that MBV is finally going to be on video uncut. It's not the greatest movie ever made, but it's a fun slice of eighties slasher nostalgia, and it deserves to be seen as it was intended. And I'm really looking forward to the remake, too. Based on the preview, it looks like the filmmakers aren't ashamed to have a little fun without crossing over the line into parody. We'll see, but I'm hopeful.

It's going to be a blast to finally watch the uncut MBV - I'm sure that lost footage is going to jump right out at fans. And the new film does look like lots of fun. Hopefully the new wave of slashers coming in '09 will ditch the irony of the post-Scream wave and be more unabashed about being straight-up slasher films.