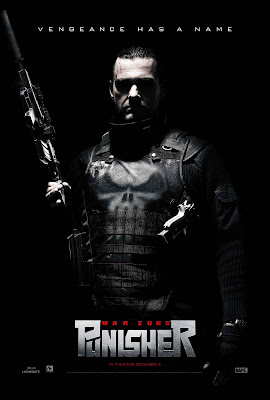 Based on the paltry grosses of this weekend's release of Punisher: War Zone, I guess most of America felt that they'd already seen two lousy Punisher movies and didn't need to bother with a third. That's a shame because with this film, director Lexi Alexander finally did right by Frank Castle. Punisher: War Zone is the hard-hitting, hard-R Punisher that fans of the character have been waiting years to see - a triple-digit killing spree that'd make Jason Voorhees stand up and salute. 2008's most lauded comic book adaptation, The Dark Knight, will likely go on to earn a statue or two at the Oscars come next year but I can guarantee that I'll be giving Punisher: War Zone more time in my DVD player.
All discussion of the relative caliber of their directing and performances aside, The Dark Knight is a movie where the hero can't accomplish a single thing. That's how we know it's a 'serious' movie, rather than just a 'comic book' movie but it's also kind of a drag. In trying to keep a lid on crime in Gotham City Batman fails utterly, mopes incessantly about his shortcomings, and then tries to atone for ineptitude by making himself a martyr - taking on Harvey Dent's sins as his own. On the other hand, Punisher: War Zone is about a hero who single-handedly kills nearly every criminal in NYC. Batman's idea of getting tough on crime is dressing like a bat and talking in a growly voice. It's all a big bluff with him - it's all about masks and theatricality. The Punisher, however, likes to shoot people in the face. And he doesn't bother teaching civics lessons to sociopaths.
The kills in this movie are outrageous and are delivered with just enough of a wink to let the audience know it's expected that they'll laugh. Because, really, when a parkor-practicing criminal is exploded mid-leap by a missile shot from a rocket launcher you're absolutely supposed to be having fun. And I'm glad that Ray Stevenson took over from Thomas Jane in this movie because Stevenson's Punisher does things that the slightly scrawnier Jane just couldn't pull off as convincingly - like punching an opponent so hard that their face literally implodes. There's also a prolonged alley fight between Castle and a Federal Agent that seems to be a deliberate tip of the hat to the alley brawl to end all alley brawls from They Live (1988). In short, this is one amazing movie.
Punisher: War Zone may not be getting the love it deserves at the theaters but I expect it'll be a favorite on DVD. Will it be enough of a favorite to get another Punisher movie into theaters one day? I'd like to hope so. But even if that doesn't happen, the old-school comic nut in me is ecstatic that they kept making Punisher movies long enough to make one that really kicked ass. I knew it'd happen one damn day. 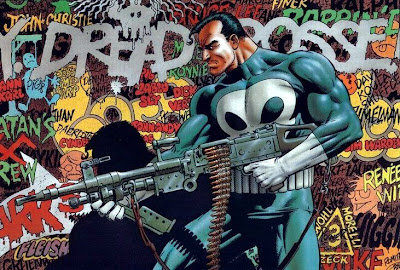 dang, too bad they didn't bring back Thomas Jane to be Frank Castle again

Jane's a great actor and he did his best with playing Castle but Ray Stevenson is perfect here. He looks like he stepped right out of the comics.