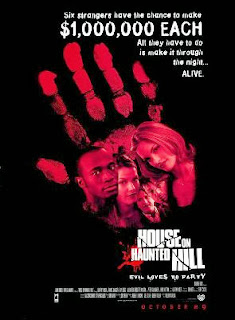 It's only October 1st but that's not too soon to start celebrating Halloween, right? You know, as great as it is to welcome the arrival of October, it's a big wet blanket on my Halloween spirit to see that there's such a dearth of theatrical horror offerings this year.

The only wide release horror film is the Carrie remake and that looks like the most ho-hum movie ever. It might end up being ok but I can't muster any enthusiasm for it. The only bright spot to this October, horror-wise, is that Curse of Chucky comes to DVD on the 8th. I think it's really stupid on Universal's part that it's not coming to theaters but hey, I'll take new Chucky any way I can get it.

Anyhow, to counter the lack of new horror in theaters, I'm rolling out Dinner with Max Jenke's seasonal standby, Trick or Trailers in an expanded, super-sized, month-long blowout, focusing on films that were released in time for Halloween. Now, I haven't done jack here since June so the idea that I'd keep up with stuff for a whole month seems like a real longshot. Still, if I missed today, I would have had to scrap the whole month right off the bat so I'm putting the first step down and then we'll just see how it goes.

The first in our entirely random procession of trailers is for the House on Haunted Hill remake - a film released in prime Halloween territory on October 29th, 1999. Directed by William Malone, this was the kick-off to a run of William Castle remakes from the genre-orientated production house Dark Castle.

A far superior haunted house outing than the Steven Spielberg-produced, Jan DeBont-directed Haunting remake that had been released just a few months earlier, this movie made for a pleasant Halloween surprise. Aside from the too-cutesy finale where the surviving characters live thanks to the intervention of a good ghost, the HoHH redux was a pretty grisly affair - especially for the late '90s - and Geoffrey Rush did his best approximation of the supreme hamminess of Vincent Price.

I don't know why Dark Castle has tapered off in recent years. My favorite film of theirs was 2009's Orphan, which seemed to point towards a more high end-ish brand of genre fare from them - as did 2010's Splice - but their only theatrical releases this year were the much-delayed (but yet not too shabby) old-school action pic Bullet to the Head and the more-than-likely terrible Ethan Hawke thriller Getaway.

It's too bad they didn't have a horror film ready for this year - they would've had Halloween practically to themselves. Just like back in the day.
Posted by Jeff Allard at 10:58 AM

i love this blog!!! i have been watching the original "House On Haunted Hill" and some other dark oldies but lovely movies. I kinda want to see this Carrie movie. NEEDLESS TO SAY, AINT NOTHIN LIKE THE ORIGINAL "CARRIE"!!!. NOTHING! i think the movie should be re-released across the nation, just like they did Titanic. Halloween is awesome, but cable does not think so. if i see a listing of Leprachan one more time,.....i'm gonna find the creator of this movie and YOUTUBE his or her torture. well, back to reading the Jenke blog!!!

I remember going to see this one with my best horror buddy and we both agreed it had a wonderfully ghoulish flavor to it that we really enjoyed. Yeah, the ending was bunk (there was a similar stink on the endings of Ghost Ship and the remake of Thirteen Ghosts) but up to that point... lots of gruesome fun.

Tara, Knob - thanks for the comments!