As the wait for a fourth Chucky film stretched longer and longer after 1991's Child's Play 3, to the point where more than five years had gone by with no news, I kind of figured that was it. All I would have going forward as a Chucky fan would be my memories and my VHS tapes. It would be a somewhat diminished life, for sure, but I'd have to learn to stop pining for Chucky's return and focus on, I don't know, other stuff.

Happily, when Scream came along in 1996 and made horror commercially viable again, circumstances aligned for Chucky's comeback. For me, any Chucky is great - I even like the much-maligned Child's Play 3 - so having Chucky back period, in even the most rudimentary of sequels, was enough to make me overjoyed. The thought that this might be really good hardly crossed my mind.

After all, what were the odds of the fourth installment of a somewhat played-out series being incredible? Pretty slim, I'd say. But getting Hong Kong director Ronny Yu (The Bride with White Hair) to helm this installment was a true stroke of genius. Working from Chucky creator Don Mancini's wickedly funny script, Yu helped to reinvent the Chucky franchise in a way that no one saw coming.

When I first saw the trailer for Bride of Chucky it just popped off the screen as not just looking different from any previous Chucky movie but different from any other American horror movie as well. It was just immediately striking, visually.

Aside from the lavish look that Yu gave Bride, Mancini's brilliant move to give Chucky another doll to bounce off of is really what clinches it for Bride. The dynamic between Brad Dourif and Jennifer Tilly gave this movie a whole new energy and I loved seeing that carry on into the criminally underrated Seed of Chucky (2004).

Released on October 16th, 1998, Bride of Chucky helped make Halloween that year an extra celebratory one and I'm stoked that Chucky is back again this Halloween with Curse of Chucky, which hits DVD today. While I do wish that Universal had given Curse a theatrical release, having a new installment of this classic series with creator Don Mancini calling the shots and Chucky still voiced by the irreplaceable Brad Dourif is enough to make me as happy as Andy Barclay unwrapping his first Good Guy doll. 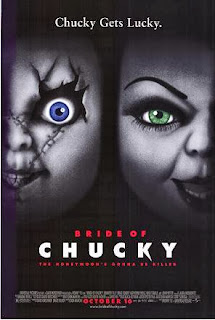 I positively adore Bride and REALLY adore Seed (perhaps the most misunderstood an underrated genre film of its decade). Bride is still constricted by the typical horror formula, but there's SO much good in it anyway. Like you say, the visuals look great and genuinely new. Dourif is having fun, Tilly is a wonder, and the script is hilarious. I also love the inclusion of the gay friend, who manages to be so much more interesting than 'the gay friend.'

Child's Play is the only series where I've seen every installment in the theaters, so it's a bummer that I have to break that record with Curse. Crossing my fingers that it's good, mostly for Don Mancini's sake!

I hope so too! Based on all the positive early feedback, though, it seems like they pulled off a winner.