Not all horror franchises are created equal. Not only was The Grudge (based on its Japanese predecessor Ju-On) perceived as a J-Horror also-ran when compared to The Ring/Ringu, but while The Grudge did clean house at the US box office upon its release on October 22nd, 2004, far out-grossing the original Saw, which had been released on the 29th that month, Saw is the series that eventually went on to become the go-to Halloween horror franchise for years to come while The Grudge sputtered out after one more theatrical sequel in 2006 and a direct-to-video third film in 2009.

I don't remember much about The Grudge 2 and I never saw the third film but I really enjoyed the first Grudge. The spooky trailer, certainly, got me excited - mostly due to Sam Raimi's involvement.

1989's The Dead Next Door aside, this was the first major horror film where Raimi served as producer but not director, and it was the first film to be made under his and Robert Tapert's Ghost House Pictures banner, so that aspect seemed very promising, especially with original Ju-On director Takashi Shimizu on board to helm it.

As Raimi had graduated to the big leagues with the Spider-Man series by then, it was nice to see his name still connected with horror. We've learned since that Raimi's name as a producer on a horror film isn't automatically a reason to get excited as his Ghost House films have been hit or miss but at the time of The Grudge, it still seemed like a guarantee of quality.

Next for the company is a Poltergeist remake, which is a risky property to mess with because it's so fondly remembered. If they can pull it off, terrific. But if it's as weak as the likes of The Possession, it could be awhile before horror fans forgive or forget. 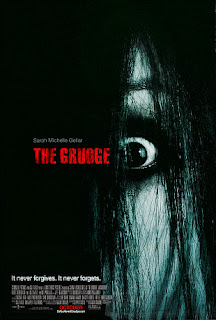