These days, with so many different avenues for movies to be released, even movies that are toplined with fairly big stars can bypass theaters and go straight to Redbox or VOD or whatever. But in 1984, a collection of clips could garner a wide release, like it was a real movie or something. Of course, putting out a "greatest hits" of horror right before Halloween seems like a pretty safe move and sure enough, Universal did fine by releasing Terror in the Aisles on October 26th, 1984, as the movie grossed just over 10 million.

I actually saw this in theaters and, even as a young horror fan, I recognized it as a missed opportunity. Director Andrew J. Kuehn and writer Margery Doppelt are clearly not knowledgeable about horror and when the movie isn't asking dippy, perplexed questions about why on earth do people enjoy being scared, it's wasting way too much time on non-horror thrillers like Nighthawks and Klute. Great movies, sure, but do they belong in a horror documentary? One with an already brief running time of 84 minutes, no less?

On the upside, this did give me the opportunity to see clips from many classic movies on the big screen - many from movies I hadn't even seen on TV yet (I only knew the likes of The Texas Chainsaw Massacre, Dressed to Kill, and other R-rated features by reputation) - and Terror in the Aisles also exposed me to several films I hadn't heard of, like Alone in the Dark. Unfortunately, thanks to the fact that none of the clips were identified, it took me forever to figure out what some of these movies were.

What the trailers for Terror in the Aisles didn't bother selling was the real reason it's great - the priceless hosting segments starring Donald Pleasence and Nancy Allen as they sit in a theater full of sketchy dirtbags and ponder aloud about the meaning of horror. Pleasence is especially great as he relentlessly hams it up (you've never heard anyone say "It's only a movie!" the way he says it here). 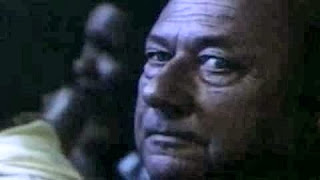 Forget the movies. Sitting next to someone acting as unhinged as Pleasence does here would likely force even the most hardened of horror fans to nervously flee up the aisles. 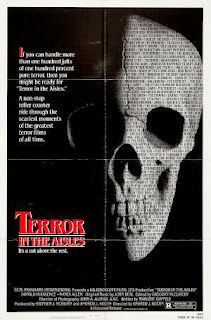 Email ThisBlogThis!Share to TwitterShare to FacebookShare to Pinterest
Labels: Donald Pleasence, Nancy Allen, Terror in the Aisles, Trick Or Trailers

It is a great snippet of horror and of a time now long past. Wonder how many fans were sent scrambling to try and figure out some of those scenes?!

Quite a few I imagine!