People often ask whether today's horror movies can ever have the seismic impact of a movie like The Exorcist (1973). In fact, just the other day Badass Digest was asking that exact question in this post.

First, you have to ask if any movie in general could ever have the same impact as movies once did. There are still popular movies today, obviously, that have a "can't miss" quality to them but it's different now. A movie like Gravity is huge by today's standards, most everyone who sees it raves about it, and it's maintaining its hold at the box office but had it been released in the '70s, or even into the '90s, however, it'd be a true phenomenon with lines around the block.

Our culture is just too splintered now for a movie - or, really, I think anything - to be such a focal point anymore. Not only is there so much out there pulling people's attention in different directions but specifically with films, the way we watch them has changed so much. I'm old enough to remember a time before cable and VHS when, if you wanted to see a movie, you had to go to the theaters.

When I was a kid, once something like Raiders of the Lost Ark had left the theaters, that was it - you couldn't see it again until it ran on ABC or something. And that would be a few years down the line, pan and scan (not that most knew what to call it then), and cut up with commercials. Even then, that would still rate as a big deal and you knew that on the schoolyard the next day, everyone would have watched it.

Now, if you don't see a movie in the theater, you know you can get through Redbox or Netflix or whatever just a few months down the line. Of course, that's if you haven't downloaded it illegally while the movie's still in theaters. There's more access to movies, from multiple venues, so the need to see them on the big screen and be a part of a cultural moment, is not the factor that it used to be.

Also, even if people were still going to the theater in the same volume they used to, digital projection means that theaters can have multiple screenings in a way that didn't used to be possible. During the '80s, I remember standing in long lines for every single big movie that came out. As much of an imposition as that was, it always made them all seem like true events - every Indiana Jones, every Star Wars, every Star Trek, Ghostbusters, you name it.

That's because my local theater had just one print of a film, maybe two. Usually it'd be one print that would have to be interlocked between two houses so the screenings would be set ten minutes apart so things would always be mobbed for blockbuster films. Today, sold out shows are practically unheard of because if they think a movie's going to be big enough it's booked into four or five houses with showings spaced every half hour or forty five minutes.

But back to horror - can a movie still wipe people out like The Exorcist did? Eh, yes and no. The reasons why it's tougher for a movie to have that kind of impact are multifold. One, someone has to actually make a movie as good as The Exorcist and that happens very, very rarely. Two, audiences are more jaded and more sophisticated. Not sophisticated as in smart because people now are dumber than they've ever been but sophisticated in the sense that they've seen so many taboos broken by now and special effects aren't mystifying in the way that they used to be. Add to that the fact that people are just bigger douches now and less inclined to give a movie their full attention and you've got a climate where, more than ever, horror movies have their work cut out for them.

All that said, I'm reassured by the impact horror can still have. I think it's kind of a miracle, really. Over the summer, The Conjuring was a big hit and it was generally agreed to be effectively scary. For seasoned horror fans, it was kind of lightweight, yes, but what's interesting and encouraging about The Conjuring's popularity is how old-fashioned its approach was. Nothing explicit, no FX to speak of, just things that go bump in the night and I find it heartening that there's still a big audience that's receptive to that kind of fright.

In 2009, I felt similarly encouraged by Paranormal Activity's success. What Oren Peli's film proved was that you could still scare an audience with very little. Sure, not everyone will be affected equally but that's always been true. I had an uncle who saw The Exorcist in theaters back when it came out and found it laughable.

The magic of movies, horror movies specifically, is that there's a suspension of disbelief involved. For them to work, it requires that we set aside the part of our brain that tells us it's just a movie. It may be that fewer people are able to, or care to, make that leap than there used to be but when a movie like Paranormal Activity does succeed, it's because, like the best classic horror movies, it invites people to stop being jaded smart-alecks and just scream. 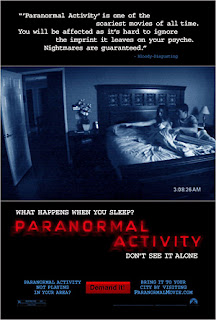 You make an interesting point about movies leaving less of an impact these days and how it's related to how we consume movies these days. Although paranormal activity seems to be a memorable movie that people will remember (at least) 10 years from now. Think movies that follow the current formula are the ones we tend to forget. But when something really goes against the grain, it's memorable. The problem with making movies that go against the grain though are more risky, and studios don't like taking risks.