My first reaction when I saw this trailer was one of relief. It gave me a glimmer of hope that the remake of Hideo Nakata's J-Horror classic Ringu (1999) might not be a disaster.

When an American remake was announced, it seemed like such a doomed-to-fail idea. How could Ringu successfully make the jump to the US? And why should it be forced to for the sake of subtitle-phobic US audiences? Further, the fact that the remake would be helmed by the director of the slap-sticky Mouse Hunt (1997) wasn't any cause for encouragement.

So the US Ring had a few big knocks against it from the start. It definitely was a film that would have to be damn good to ever be embraced by the horror community but this trailer went a long way towards alleviating at least some of that early skepticism. It was like the horror equivalent of the first Tim Burton Batman trailer that sold irate comic fans on the idea that, ok, this might not suck.

When The Ring was released on October 18th, 2002, the general consensus was that director Gore Verbinski and writers Ehren Kruger, Scott Frank, and Koji Suzuki (the author of the Ring novels) had pulled it off. This was one of those rare but happy instances of Hollywood doing right by horror. Sure, some fans still continued to grouse about whatever but by most reasonable standards, The Ring was an admirable remake. VCRs and video tape may have become all but obsolete in the eleven years since The Ring was released (which reminds me that my first viewing of Nakata's film, like that of many US fans, was on a VHS dub) but The Ring still plays great.

US audiences certainly embraced Verbinski's film in a big way, leading to a subsequent wave of J-Horror remakes, including The Grudge, Dark Water, Pulse, One Missed Call, The Eye, and The Uninvited. Few were any good, leaving one Ring to rule them all. 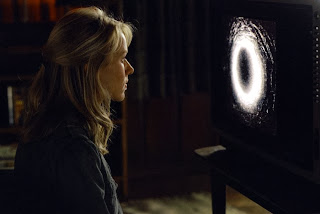 Yeah, I too was skeptical because the underpinnings of Ringu, the reason the curse worked and made sense, were so embedded in the Japanese culture, in tradition and in the abnegation of tradition on the part of the newer generation, the ones ultimately marked by the curse, the ones cursed to honor tradition (or a horrible perversion of tradition) via the very electronic devices that had given them a sense of independence, that symbolized the break with the old ways.

But the remake did a neat spin on that, swinging wide of the subtext of tradition (which is relatively nonexistent in American culture) and speaking to that generation of Americans, those 30-somethings, who were/are extending their childhoods into their adult years. Even though they have kids, they are unstructured, unsound, they won't grow up... until the curse of Sadako (now Samara) forces them to play by the rules. I don't value the remake as highly as I do the original and I don't know, even though I own it, if I'll watch it again any time soon, but I really appreciated the translation from culture to culture. It's an exciting exception to what is sadly an often unambitious role, horror-wise.

Great observation, Arbo. Making the jump from the Japanese culture to the US was probably the biggest hurdle for the Ring remake to make but, against expectations, they succeeded.