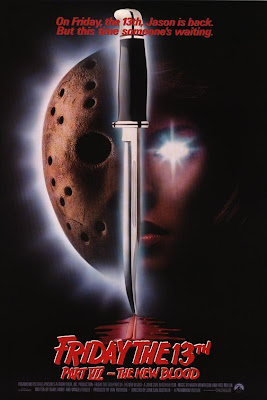 In the late '80s, just as the the Nightmare on Elm Street series was exponentially increasing its cultural clout with state-of-the-art FX and MTV-driven visuals, the Friday the 13th franchise proved unable to hold the same currency with audiences. The '80s, sadly, were moving on without Jason. We didn't have the phrase 'jump the shark' in the popular vocabulary back in 1988 when Friday the 13th Part VII: The New Blood was released but in hindsight, this is where it happened for the venerable series. Some might say that 1985's A New Beginning better deserves that dishonor but not only do I think there's some unappreciated qualities to A New Beginning, but the series also rallied from that slight stumble with one of its strongest entries - 1986's Jason Lives - which only made the next step of The New Blood that much more notable of a failure.

Maybe it was the loss of continuing character Tommy Jarvis that left the producers confused as to where to take the series next. After all, Friday Parts IV-VI had been a loosely connected narrative all its own where Jason finally had his first ongoing nemesis to contend with. But with the conclusion of the 'Tommy Trilogy', there didn't seem to be an obvious next direction to take. Originally, The New Blood was going to be the showdown between Jason and Freddy but negotiations between New Line and Paramount fell through, leaving that project to go on the back burner (as much as I enjoyed what eventually became 2003's Freddy vs. Jason, I do wish the project had been done back in the heyday of both characters - even if it had been terrible, it would've had that '80s vibe to it). With no Freddy to fight, Jason was pitted against a telekinetic teen in the form of Lar Park-Lincoln's traumatized Tina Shepard.
As The New Blood opens (after a lame pre-credit recap of the series narrated by Crazy Ralph himself, Walt Gorney), we see the character of Tina as a young girl living on the shores of Crystal Lake with her long-suffering mother and her disappointment of a father. Her dad, apparently, isn't all bad - he just likes to slap Tina's mother around too much. But when her dad gives her mom one whack too many, an angry Tina gets in a rowboat and starts drifting out onto Crystal Lake. When her dad runs out to try and get her back, Tina unwittingly unleashes her psychic fury, sending her dad plummeting into the lake along with the dock that he's standing on. That this might kill a man, I can accept. That no one in the days, weeks, or years after would ever drag the lake to recover this man's body is much more of a stretch. I mean, it isn't as though he was lost in the middle of the Pacific Ocean during a monsoon. The guy fell into a lake - and not even an especially enormous lake - so even if the dude was a total asshole, you'd think that some passing effort would've been made to get his body back. Maybe the filmmakers felt that a precedent had already been established that when someone drowns in Crystal Lake, they just stay there until they come out on their own. After all, if the local authorities couldn't be bothered to retreive the body of a young camper, it's likely that they wouldn't bother to pull anyone else out of the water.
Cutting to the present, Tina is still struggling to deal with her guilt over causing her father's death as well as trying to harness whatever mental powers she has. To do both, she's coming back to her old home on Crystal Lake along with her mother Amanda (Susan Blu) and shady psychiatrist Dr. Crews (Terry Kiser, later to be known as Bernie in the Weekend At Bernie movies), who has his own agenda. Luckily, for those coming to see a Friday the 13th movie, the house next to Tina's place is filled with the usual assortment of horny, drunken teen waste. And when Tina takes a stroll out to the lake's edge to wish her father back to life, guess who she resurrects instead?
Ideally, The New Blood might not have been so lousy (then again, ideally no movie should be so lousy) but this just didn't have the budget needed to effectively realize a psychic assault against Jason. Setting aside the fact that bringing in this type of sci-fi element wasn't the best fit for Friday the 13th in the first place, I think with enough funds to do it right, this could've been a spectacular installment for the series. Unfortunately, Tina's abilities are a little on the low-rent side with Tina coming across as the bargain aisle Jean Gray.
Park-Lincoln herself is fine - although she lacks the natural charisma of the better Friday leading ladies - but as a psychic warrior, she isn't especially formidable. More damaging, in the wake of the likes of Carrie, The Fury, and Scanners, psychic powers had already had been impressively realized on film and The New Blood isn't able to come close to matching or surpassing those efforts. Tina's powers most often manifest themselves by hurling objects across a room - and these objects (including such lethal projectiles as a potted plant) don't even move all that fast. That means that Jason has to stand in place unable to react while a TV or whatever else Tina is using her whammy on slowly bobs through the air towards him. Jason will then be momentarily staggered, step forward a few feet and then have to patiently wait while Tina unleashes her next crushing attack.

I also feel that the makers of The New Blood dropped the ball in showing Jason's ability to cope with a new type of foe. To encounter someone who can do the things that Tina can surely must blow whatever's left of Jason's mind. But rather than see Jason in a scenario where he might be defeated by an adversary, then have to regroup, strategize, and come back with a new approach - he simply meets Tina once, proceeds to take some abuse, then their conflict is over. I would've liked to have seen their battle take place over at least two separate rounds and seen some cunning on Jason's part in a rematch instead of having him simply stand there flat-footed. 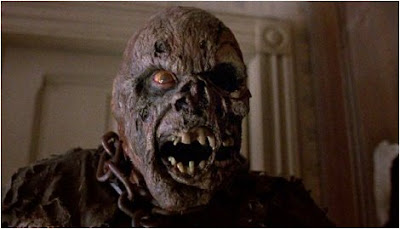 On the upside, this was Kane Hodder's debut as Jason and his gung-ho performance enlivens the film somewhat. One of his fan favorite kills is here (the sleeping bag victim - a scene trimmed in all its home video incarnations down to one whack against the tree as opposed to the six that was originally seen in theaters) and the physical look for Jason here is one of the most elaborate and effective of the series, with director and makeup artist John Carl Buechler playing Jason's undead status to the max. For the first and last time, Jason looks truly dead and decaying - even to the point of an exposed spine being seen through his tattered clothes (awesome!). There's also a prolonged fire gag with Jason completely consumed in flames that's one of the most impressive stunts in the series. Unfortunately, this was the most infamously edited of the Fridays, with the MPAA forcing Buechler to neuter the film's potentially stronger moments, like Terry Kiser's should've-been legendary death at the hands of a Weed Wacker.

Where The New Blood really loses it is at the end, where Jason and Tina are facing off on the dock on Crystal Lake and Tina's ace up her sleeve is to bring the body of her father from the depths of his watery grave to drag Jason back down with him. When I saw this in the theaters, that was a deal breaker and it hasn't gotten any better with age. I mean, the movie had been pretty piss poor up to this climatic moment but I hadn't quite hated it. For this to be the big ending, though, was just too much. In all fairness to Buechler, he had wanted to have the father's body be a nasty, decomposing corpse - that, at least, I could of lived with. But the forces that be at Paramount blocked that. That means the father returns from his extended stay at the bottom of Crystal Lake looking as though he drowned just an hour earlier, rather then over a decade ago. I mean, when young Jason came out of the lake at the end of the original, he looked more or less like someone who had believably been at the bottom of a lake for many long years. When Tina's dad comes back at the end of The New Blood, he looks like he just skipped through a lawn sprinkler.
With The New Blood, the Friday franchise had started to go too far from what made it work in the first place. It was mistakenly trying to incorporate the kind of fantasy elements that played perfectly in the context of the Elm Street series but were all wrong for Friday the 13th, which should've held fast to its straight-forward slasher formula. At the same time, however, the splatter FX that was Friday's bread and butter was being curtailed by the MPAA to the point where it was impossible for the series to deliver like it had in the past. The Elm Street films could get away with turning teens into cockroaches but Jason couldn't jam lead piping through someone's skull. In 1988, the game was changing, and it wasn't in Jason's favor. He found himself fighting foes a lot stronger than any psychokinetic teen, and for the first time he was on the ropes.
Posted by Jeff Allard at 10:05 AM