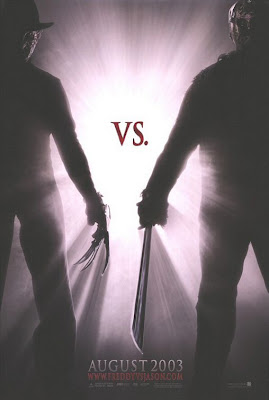 From the moment that New Line - the home of Freddy Krueger - gained the rights to the Friday the 13th franchise, there was never any question of if Freddy and Jason would meet on film, it was just a matter of when. In 2003, long years of development on the part of New Line paid off with a horror event first teased to audiences at the end of 1993's Jason Goes To Hell.

After Jason Goes To Hell's release, I remember reading in the pages of FANGORIA about the early attempts to get Freddy vs. Jason rolling and feeling that, well, any day now it'll happen. I mean, it's a movie that a whole generation or two of horror fans were crying out for - how long could they hold it up? But as time rolled on, activity would spark on the project then die off. Finding the proper reason to motivate the melee between Elm Street's dream stalker and Crystal Lake's carnage champion was no simple feat. Eventually, after a reported eighteen drafts by screenwriters including Ronald D. Moore and Brannon Braga (of Star Trek: New Generation fame) and David J. Schow (Leatherface, The Crow), it was writers Damian Shannon and Mark Swift who became the duo to make it happen with rewrites courtesy of David Goyer (Blade, Batman Begins).

Given all the years of waiting, after all the aborted treatments, and all the hands this project passed through (I really wish that this could've been Fx master Rob Bottin's directing debut, as it was almost slated to be at one point), Freddy vs. Jason ended up being about as satisfying as anyone could've reasonably hoped. Coming in 2003, however, long after the prime of both series had passed, Freddy vs. Jason can't help but feel out of its element more than it would've in, say, 1988. Ideally, this needed to be made during the height of Freddy and Jason mania (of course, realistically, it's the kind of project that could only be made when both franchises were so down and out that they needed each other). Even if it had been a botched effort back in the '80s, it would've it would've felt of a piece with the Friday and Nightmare films of the time (and undoubtedly would've boasted a righteous heavy metal soundtrack with contributions from every hair band on heavy rotation on MTV). Freddy vs. Jason however, in tone and style, feels like it exists outside of both series (ironically, even though it was made just six years ago, Freddy vs. Jason somehow feels more dated now than any of the '80s Friday or Nightmare sequels - go figure).

That odd-man-out vibe might've been alleviated by bringing back Kane Hodder as Jason to preserve a sense of continuity. Hodder's films weren't my favorites but even though his Friday films were some of the most disappointing of the series, his presence as Jason gave them a unified feel and this should've been his swan song to the character. At least Robert Englund got to reprise Freddy one last time here (it's undeniably strange, though, to see Englund stalking characters played by actors who, in some cases, weren't even born when the first Nightmare was released). Rather than the beginning of a new franchise, this feels like a last hurrah for the classic versions of these characters and Hodder - who spent more time beneath the mask than any other actor and who kept the character alive with fans on the convention circuit even when the film series was lying stagnant - should've been there for it. The new Jason, Ken Kirzinger, did a decent job but he didn't project the same power that Hodder's Jason did - Hodder's body language would've been a far better fit for this film. At the time I didn't think the switch from Hodder to Kirzinger was such a big deal but looking at Freddy vs. Jason again, it does hinder the film. I know there was talk about how the producers and Yu wanted Kirzinger because he could deliver the empathy factor better, that there was more soulfulness in his eyes or some such nonsense but Hodder's 'star power' is what this Jason needed. 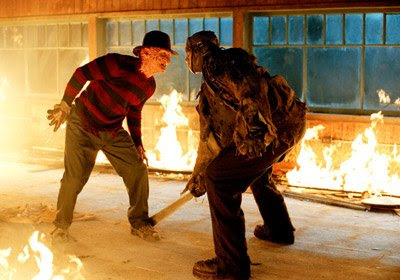 That said, director Ronny Yu works hard to make this a blood-soaked battle royal that pops off the screen and the climatic fight is definitely the knockdown, drag-out, Hall of Fame battle that it should've been. Yu stages the lengthy fight as the brawl to end ‘em all and neither combatant pulls their punches. Every stab goes deep - blood spurts out in geysers and limbs fly across the screen. If you didn’t see this with a full theater cheering on each and every blow, then you missed out. It just isn't the same experience at home.

For Friday fans, the biggest criticism to be made here (outside of the absence of Hodder) is that this is much more slated towards a Nightmare picture than a Friday the 13th. From the start, it feels like Jason is a guest in a Freddy film. Perhaps inevitably, due to the demands of getting both characters together (or just because of Yu's sensibilities as a director), this is way more fantasy-orientated with even the kill scenes given a cartoonish spin. On the upside, it's all grandly gory and most importantly, Jason doesn't punk out against Freddy. Their fight mercifully doesn't come down to a disappointing draw and our boy Jason is the last slasher standing. Freddy may have his wisecracks but Jason lets his machete do the talking and that machete can get awfully loud.

Even though Freddy vs. Jason has it's share of faults (among which is some of the worst performances in the history of either franchise - lead actress Monica Keena is especially atrocious), it does a lot right and it gives more respect to the characters than one might've expected. This could've been done as a quick cash-in but the final product shows more care to both franchises than that. Yu has fun incorporating the iconic imagery of both series while adding a few indelible sights of his own (seeing a demonic Freddy leap from Crystal Lake is just awesome). For fans of a certain age, this film was nothing less than horror history (watching it again, I still found it cool to hear the Nightmare theme segue way into the Friday ki-ki-ki ma-ma-ma as a blood red version of the New Line logo appears). And in the pantheon of vs. movies, well, this might be the one that best delivers. As the final appearance of Jason before the reboot, Freddy vs. Jason is like watching a last sunset on Crystal Lake before a new bloody day dawns.
Posted by Jeff Allard at 7:18 AM

Can I just say I loved this movie. Sure it's flawed, on second viewings the acting is atrocious, but damnit Freddy Kruger and Jason Vorhees fought! That look on Freddy's face when he realizes he's at camp Crystal Lake is worth the price of admission. The fact that there was a winner was awesome too.

Yeah, this movie really only needed to do one thing to succeed and it did it. Whatever flaws it might have are secondary to the fact that Freddy and Jason fight and they fight hard. And Jason wins, which is exactly how it had to go down.