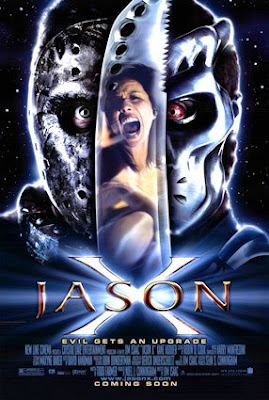 Going into space didn't herald great things for Jason's horror brethren Pinhead or Leprechaun so the idea of sending Jason to slay among the stars didn't seem like a promising next step for the series. The previous Jason entry was the controversial Jason Goes To Hell, which got a mixed response from the fanbase and audiences, so maybe a back-to-basics move might've been more sensible - especially as Jason Goes to Hell was released in 1993, making the gap between that film and Jason X the longest between any Friday entries to date. Maybe audiences were due to be reminded of what originally made the Sultan of Slaughter the brand name that he was. So was it really a prudent move to take him so far from his element - like off the planet altogether?

The answer, as it turns out, is "kind of". From a commercial standpoint, Jason X was a failure, being the smallest earner of the entire Friday series to date. So the 'hook' of putting Jason in space wasn't the draw that the producers might've hoped it to be (although in fairness, due to studio politics, Jason X was held back from release for two years, during which time the movie was widely bootlegged, cutting into potential revenue). But as a film, Jason X exceeded most expectations. Directed by Sean Cunningham protege James Isaac (who also directed the Cunningham-produced The Horror Show) and written by the future scribe of My Bloody Valentine 3-D, Todd Farmer, Jason X is far from the debacle some might've feared it to be. Farmer has stated that he's unhappy with the many rewrites done to his script, and I imagine a better movie was initially in the offing here, but the final product isn't so shabby.
Set for the most part in the far-flung year of 2455, after both Jason and a Final Girl (Lexa Doig as Rowan) frozen in cryogenic suspension back in our time are revived by a team of students on expedition to Earth, Jason X proves that the future offers several new challenges and opportunities for Jason. Challenge-wise, Jason learns that dismemberment isn't as effective with robots as it is with people. He also learns that there's a lot more firepower to contend with in the future. But yet the future science of nanotechnology gives Jason a new, more resilient body. Reborn as a gleaming gladiator of gore, the so-called Uber-Jason is Jason X's lasting claim to fame. I love the look for this costume - it's goofy but in just the right way. It reminds me of specialized action figures where characters like Batman or Spider-Man will be outfitted for some environment that they never actually encounter in the movies or comics, like Scuba Spider-Man or Artic Camouflage Hulk. That's how this Uber-Jason strikes me - like an action figure that they happened to build a movie around. 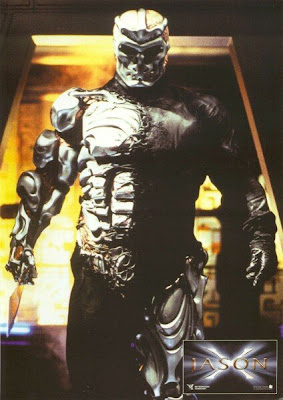 In his last outing as Jason, Kane Hodder does a great job selling what might've otherwise been been a too-ridiculous alteration to the character. From the start, Hodder always imbued Jason with a little bit of a superhero vibe (it probably helps that his first Friday was a comic book-style thrown down against a telekinetic teen - Hodder's Jason was never from the down n' dirty Friday era, there was always a fantasy element to his installments) so it doesn't seem out of character for his Jason to become an even more exaggerated powerhouse. As for his kills in Jason X, however, they aren't his best. The highlight comes early on when he dunks a victim face first in a sink of liquid nitrogen, then proceeds to shatter their frozen face against a counter. The rest of the movie's body count is more on the lame side of the galaxy. Jason's dispatching of a crew of hardass space troopers (including writer Todd Farmer in a cameo role) is all right (giving Jason a good adversary in the form of Peter Mensah's hard-to-kill Sgt. Brodski) and the virtual reality return to '80s-era Crystal Lake as Hodder reprises his famous sleeping bag kill from Part VII is a funny bit.

By the end of the movie, I believe Jason X has burned through the novelty of its premise to the satisfaction of anyone who might care. I do wish that he claimed a few more victims before the end - the android played by Lisa Ryder really needed to be put down for good and her inventor shouldn't have slipped past Jason, either (you just can't call Jason "Slappy" in a Friday the 13th movie and live) - but it isn't the fiasco some fans feared. Save for The New Blood, I prefer his Earth bound adventures but Jason X wasn't just a case of Jason being lost in space.
Posted by Jeff Allard at 5:22 AM

"I do wish that he claimed a few more victims before the end."

To be fair, this movie has Jason's largest body count, assuming that all the folks living and working on the space station Jason rams died.

Yeah, Jason racks up a great body count here. But some characters just shouldn't be allowed to escape Jason's wrath and Kay-Em 14 and Tsunaron both had it coming, in my opinion.