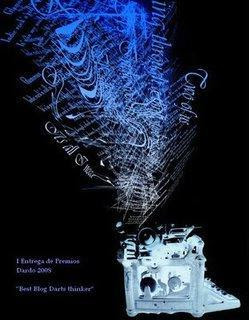 I'm late in addressing this but I wanted to give a wholehearted thanks to my pals at Kindertrauma for picking my modest blogspot as deserving of a Premio Dardo Award. As I understand it, this online accolade is meant to spotlight blogs that are considered exemplary (or perhaps simply non-sucky) and as Kindertrauma itself is as exemplary and non-sucky as they come, I'm gratified by their support.
As part of the conditions of receiving a Premio Dardo Award, one is supposed to in turn nominate five blogspots they feel deserve the same attention. Unfortunately, on my 'to do' list is to find more time to explore the blogosphere at large. I remain woefully ignorant of the many fine blogs out there and the few that I have found are already recipients (probably several times over) of Dardos. That said, here's four blogs I frequent enough to mention, plus one that seems to have stopped posting but is well worth visiting.

In no particular order:
Stephen R. Bissette's MyRant:
Best known to many as a celebrated Swamp Thing artist along with John Totleben during much of writer Alan Moore's tenure on the title, Bissette is peerless when it comes to film criticism and his vast knowledge of horror, sci-fi and cult cinema is guaranteed to make even the most hardcore fan feel like they've only scratched the surface of what's out there. There's much more to his blog than movies, though, so check it out.
Johnny LaRue's Crane Shot:
I keep forgetting to add this excellent blog from Marty McKee, moderator at Mobius Home Video Forum, to my Side Menu so I'll take this as the occasion to finally do so. McKee's opinions on films are informative and unpretentious and that kind of straight shooting style is always welcome with me.
Mad Mad Mad Mad Movies:
True to its title, many a mad movie is discussed here by exploitation enthusiasts The Vicar of VHS and The Duke of DVD.
Evil On Two Legs:
Self-described as offering "reviews and commentary on the horror genre with an emphasis on slasher films", the folks at Evil On Two Legs write about the kind of stuff I like and they do it well.
Kill The Snark:

I guess this blogspot is on permanent hiatus seeing as it hasn't been updated since November of last year but I hope it gets going again as a site that promises "uncynical opinions on film and media" and delivers on that is something worth keeping around. Loved Jeff Kuykendall's thoughtful review of the last X-Files movie.
Thanks again to Kindertrauma for the generous props!
Posted by Jeff Allard at 8:10 PM

Yeah, I've been a reader of Final Girl for a long time. Great blog!

The Vicar of VHS said...

Boy, I'm *really* late in finding out about this, but thanks for the mention! It's nice to know there's someone out there reading and appreciating.

And of course you're doing exemplary work here--keep it up!