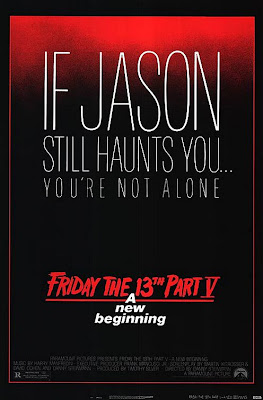 This controversial attempt to continue Friday the 13th after 1984's The Final Chapter didn't win many fans at the time of its 1985 release. And in fact, it hasn't won many more in the twenty-four years since then, either. There's a large contingent of Friday fans who are still beside themselves that this wasn't the 'real' Jason. But I love A New Beginning. In the interest of full disclosure, I also love the much-loathed Halloween III: Season of the Witch, which tried to continue the Halloween series without Michael Myers. I guess I must find it interesting when franchises try to break away from what's expected of them. Either that, or I just like being contrary.

In the case of A New Beginning, I believe it was way ahead of its time in its irreverent attitude towards the Friday franchise and towards slasher cinema in general. Whereas Friday the 13th began with a slow burn murder mystery in which a small group of isolated kids were annihilated one by one, A New Beginning is the crackhead version of that. There's a murder mystery here, too, as an unknown assailant is picking off various victims but rather than play up the suspense and atmosphere or invite some involvement with the characters, director Danny Steinmann and writer David Cohen turned A New Beginning into a trashy, hyper-kinetic, coke binge of a slasher film. And before Tom McLoughlin included self-mocking humor in Jason Lives, A New Beginning had already done the same in a much slyer way (such as the inclusion of a Greenpeace poster in one victim's bedroom with the ironic slogan "Stop The Slaughter").
Set in the youth rehabilitation center of Pinehurst, a halfway house for troubled kids, A New Beginning had the largest cast of any Friday film to date. On top of the large cast of kids populating Pinehurst, there's also the home's two head counselors, an eldery cook and his young grandson Reggie. That's more than enough potential victims (and potential red herrings) for any slasher film to handle but then Steinmann and Cohen bring in even more characters to fill out the cast. There's the cigar-chomping sheriff who believes Jason is still alive, the batshit crazy hillbilly bitch along with her wailing man-child of a son, the cokehead van driver who takes patients to and from Pinehurst, a pair of ambulance drivers, and a shady vagrant looking for work. And as if all those characters weren't enough, the first two victims of the film are two young dudes stranded on the side of the road (both inexplicably dressed like Marlon Brando in the The Wild Ones) who have nothing to do with anything else in the film except to be in that single scene to die. With all these people populating the cast of A New Beginning, it's clear that Steinmann and Cohen weren't out to make a moody character piece. This was about saturating the screen with more kills, more nudity, and more humor than any previous Friday. 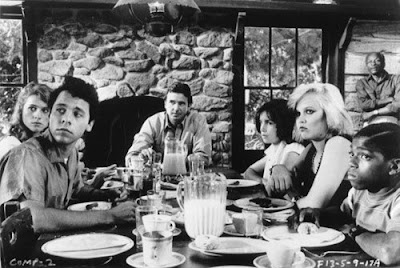 And whereas the previous Friday's had been all about presenting young characters who were very All-American in their looks, backgrounds, and personality, A New Beginning delivers a much coarser crew. The kids in this film aren't the same wholesome kids (with an innocent taste for pot and sex) coming to camp for the summer or out to party in the woods as we'd seen in other Fridays. These were all damaged kids, with mental and emotional issues. They're either punk-asses, or withdrawn, or dysfunctional in some other way. And outside of the concerned members of the Pinehurst staff, nearly every other character in A New Beginning is portrayed as being either shrill, abrasive, or lewd. Sometimes all of the above. At first glance, it's a jarring approach but it makes A New Beginning stand out. While it's almost impossible to recall the cast members of most of the Friday the 13th's, even characters who have very little screen time in A New Beginning are memorable (my personal favorite being Miguel A. Nunez Jr. as 'Demon', doomed to die after taking an emergency enchilada dump).
Although the previous Friday was The Final Chapter, A New Beginning was a real era-ender as this was the last Friday to be overseen by the late Phil Scuderi, one of the group of Boston theater owners who bankrolled the original Friday and who maintained creative control over the sequels until Part VI when they stepped away from the series. From the testimony of several key players as revealed in Peter M. Bracke's indispensable account of the Friday series, Crystal Lake Memories, Scuderi exercised much more influence over Fridays Parts 2-5 than is widely known. Part 2 screenwriter Ron Kurz gives credit to Scuderi for much of what went into Part 2, such as the wheelchair death of Mark and the famous shish-ka-bob death of Sandra and Jeff (as Kurz told Bracke: "Part 2 was a true collaboration between Phil Scuderi and myself...Phil was a creative force in his own right.") and Final Chapter director Joe Zito discussed how the script that he and Barney Cohen came up with was shaped by Scuderi's input ("Barney and I built the script from the beginning, but it was completely visualized by this guy sitting in Boston.").

With A New Beginning, Scuderi handpicked Steinmann as director and I believe that in making that pick, knowing Steinmann's background in porn and exploitation, Scuderi was out to achieve a more down and dirty, grindhouse vibe from the start. I don't think that was just his commercial instincts talking, I think it was Scuderi's personal taste as well. After Scuderi's departure, the films immediately became weaker and more watered down, leaving A New Beginning to be a swan song for the series' more brutal days. And judging by the grittier style of the early sequels (no supernatural elements, no explanation for Jason's invulnerability) and Scuderi's support of the psychological approach to A New Beginning, I suspect that under his stewardship, Jason would've never become the amped-up super zombie of the later installments. I think Scuderi's instincts were to keep Friday within the real world as much as possible and time has borne this out as being the correct approach to the series. If Jason had to be brought back to life for commercial reasons, I think if Scuderi had stuck around maybe instead of being revived by lightening, the series would've cribbed from the Chuck Norris film Silent Rage (1982) and had Jason be revived by unscrupulous scientists.
Even though the idea of a replacement Jason was roundly hated, I think A New Beginning's attempt to pass the torch to another killer was fine. The resolution here was ridiculous but in theory, it should've worked. Maybe to have Tommy be the killer all along would've been the better way to go. John Shepherd gives an underrated performance with his Tommy coming across as legitimately dangerous and yet sympathetic and tortured. His sudden bursts of violence are 100% kick-ass and if this version of the character ever became the next Jason, it would've been sick. He wouldn't have even had to resort to weapons because he already fucking was a weapon. Somewhere between this film and Jason Lives, though, he must've lost all his skills 'cause if he was still able to do the shit he did here, no cop would've been able to put him in a jail - you would've had a First Blood Rambo situation on your hands. That's a movie I would've loved to have seen - Tommy at war with an outmatched police force. Maybe they could've brought back Shavar Ross as Reggie the Reckless to talk Tommy down. Now that would be a dream Friday the 13th.
As much as it left many followers of the series frustrated, I find A New Beginning to be a work of misunderstood humor (when the severed arm of a hacked up fat kid is laying on top of his own dead body still clutching a chocolate bar, I've got to believe that's intentionally funny) and sleazy charm. It may not be the most favored Friday, but to paraphrase its tagline, if A New Beginning still haunts you...you're not alone.

Part V was an over-the-top tour de force, a real hoot to watch in my local theater (which was sold out opening night, BTW). I still remember that night: My folks and younger brother went to see Witness, I went solo to Part V.

Your review is spot-on about everything. And I too loved the fact that Jason wasn't the killer. A great, gutsy twist by the filmmakers.

I do have one gripe about Part V: If I remember correctly (SPOILER ALERT, other readers), the final scene is Tommy standing behind a woman, in his hospital room, wearing Jason's mask and raising a knife in the air. This is not followed through at all in Part VI. In fact, I didn't care for how Tommy was portrayed Part VI by Tom McLoughlin as a relatively normal teen, especially after Part V (and John Shepherd) made efforts to portray him as damaged and scarred by what happened in The Final Chapter.

I freaking love this movie. I think the story is good, and an idea of a copy-cat Jason killer is a great idea. Some aspects of the movie stinkks, but hell there was something in all of them that sucked.

Thanks for the comments, guys - I'm glad to know I have some company in loving this movie! As for why Part VI never followed up on the last scene here, I always thought that either this movie was considered to be out of continuity just because it was so rejected by fans or that Tommy never actually went ahead and harmed Pam. He could've been subdued by the hospital staff and taken to whatever facility he was in until the events of Jason Lives. I do agree that Thom Matthews' clean-cut portrayal of Tommy was far too normal compared to John Shepherd's more damaged take on the character.

Part V has always been my favorite in the series. It's just flat out great. The new Friday should have been a third as good.

Check out my post "A Friday Revue" under Pieces of Me at www.literalremains.com.