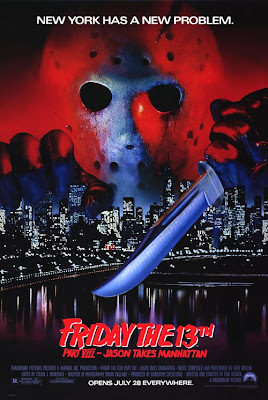 For horror fans, the decade of the '80s did not end on a proud note. By 1989, the titans of terror - Jason, Freddy, Michael Myers - who had once ruled over the box office had all frittered away their popular appeal along with their street cred. Arguably the most grievous fall of the bunch was with Jason and Friday the 13th as the series disappeared up its own ass with Jason Takes Manhattan. Time heals all wounds, though, and although I never thought I'd say so back when I saw this at a midnight show opening night, I now have something of a soft spot for Friday VIII. Of the four Kane Hodder films, it easily stands as my favorite. Call me cheesy but I can't help but get a rush every time this movie begins and the best lame late '80s rock tune to grace a lame late '80s horror movie - "The Darkest Side of the Night" by 'Metropolis' - kicks in ("Neon shadows that point the way/Never lead you out/It's a game they play").

At the time of its release, I was put out that this was such a softball movie. I mean, come on - where was the horror? Now as the world has become a darker, more dangerous place in the years since, Jason Takes Manhattan's innocuousness is a great part of its appeal. When the film opens in NY with the sight of the Twin Towers occupying their iconic place in the former Manhattan skyline as a radio DJ says "You can't get the adrenaline pumping without the terror, good people", it's hard not to look at Jason Takes Manhattan more fondly than we once did as a keepsake of a simpler, safer era. And with subsequent shots of generic street punks posed around their boom box intended to represent the threatening, 'hardcore' side of NY, Jason Takes Manhattan is a welcome - and sometimes amusing - reminder of what truly mild times we used to live in.
Nostalgia aside, the movie itself holds up slightly better than it should, thanks to some solid directing by Rob Hedden (who had cut his teeth on several episodes of TV's Friday the 13th: The Series). Among the original group of Paramount Friday movies, it's arguably the most visually stylish (particularly in regards to Jensen Daggett's surreal flashbacks). Friday VIII's main fault, as is often cited, is the fact that the title is so bitterly misleading. 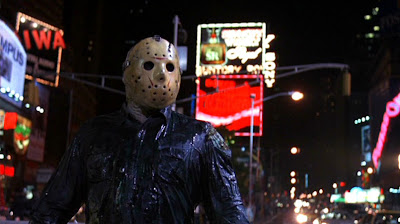 The idea of Jason stalking victims among the familiar landmarks of Manhattan is brilliant and had the budget allowed for it, it would've kicked ass (even as it still would've been called out in some quarters for being too mainstream). But what we get instead is Jason stalking kids on board a ship until he gets to the mean streets of Vancouver, with just one amazing 360 shot of Jason standing in the midst of the actual Times Square as a bone tossed to fans waiting for Jason to "take" Manhattan. Had they called this, say, "Death Cruise" and included the Manhattan material as a bonus on top of it, who knows - the film might've played slightly better.
The MPAA was at their most heavy-handed in the late '80s so - as was the trend in the later Fridays - Hedden doesn't spill much blood but he finds inventive ways around it with some of the better "dry" kills in the series. Kelly Hu's dance floor death is staged well, as is Jason's pursuit of Peter Mark Richman's character. Richman plays an arch-weasel who flees from Jason into a building and not a moment later, he's being hurled out of a second floor window by Jason who has somehow already gotten into the building - and onto the second floor, even! - well ahead of him. Hedden has fun with Jason's by-then unquestioned ability to be in all places at once, and it's easier to appreciate that intentionally tongue-in-cheek approach now than it was in '89 when it simply seemed corny.

The crowning kill of the film, of course, is the rooftop boxing match between Jason and V.C. Dupree as 'Julius' that ends with Jason punching Julius' head clean off his shoulders, sending it plummeting into a dumpster many floors below. A lot of fans cite the sleeping bag kill in The New Blood as Hodder's best kill as Jason but for me, the death of Julius beats all comers. Hedden puts us in the POV of Julius' severed head as it falls through the air and when I saw Mel Gibson use the exact same shot in Apocalypto as a sacrifice victim's head tumbles down the steps of the temple, I had to think "Hey man, Rob Hedden was there first!"

Part VIII's big finale in the sewers as Jason is felled by a flood of toxic waste and, in death, reverts to the innocent child he once was is still perplexing. I can appreciate the nod to classic monster movies that Hedden meant this to be - as in the Wolf Man or the Invisible Man films where the monster returns to normal as they die and find peace - but it just doesn't work in the context of the Friday the 13th universe. 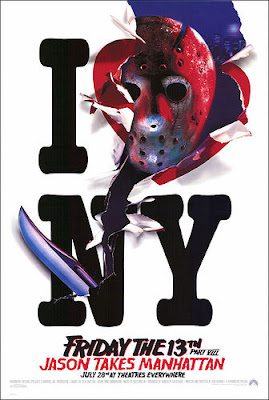 Jason Takes Manhattan turned out to be an era-ender in many ways. It was the last of the Paramount Friday the 13ths, the last Friday the 13th of the '80s - and in the mind of many fans, the end of the original continuity of the series (I side with those who look at the subsequent New Line films as taking place within their own separate universe) - so it's hard not to favor this flawed curtain call as a souvenir of the original days of Friday fanaticism. The '80s wouldn't have been the same without these movies to look forward to.

The flashbacks of Jason as a kid didn't work for me. The original "Jason as a kid" look was too iconic to be replaced with what they used.

Well, from a story standpoint, I'm not crazy about the flashbacks. I think they point to the internal confusion within the series about what really happened to Jason as a kid. Up until Jason Takes Manhattan I think it was kind of understood that Jason had survived his drowning and went off to live in the woods and grew up there and that the young Jason at the end of Friday the 13th was just part of Alice's dream. Otherwise, it'd be hard to explain the fully grown Jason of Part 2, which takes place just five years after the events of the original. So for Jason Takes Manhattan to make it look like a young Jason was in the lake for years didn't jibe with what had already been established. That said, I do think the visuals for those flashbacks looked sharp, I just think they added an element to Jason's history that didn't work. And, as you say, they altered the actual 'look' of Jason too much as well.

I totally agree that they should have given the movie a different name. They were inviting the pot shots by calling it "Takes Manhattan" and then not delivering on it.

The movie has definite issues for me, but that said I agree with you - it is a great "80s" film and a fun Jason flick, if that's what you're in the mood for.

And it has Jensen Daggett. heh!

If you like Jensen Daggett, do yourself a favor and pick up the His Name Was Jason documentary. To see her today is something else - she looks even better now than she did twenty years ago!