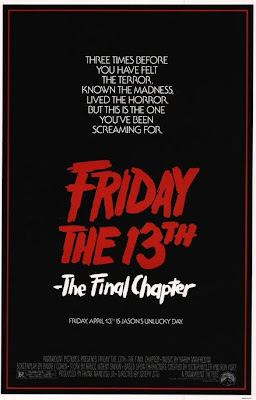 The prospect of the Friday the 13th series coming to an end was a shocking notion in 1984. At least it was for the legions of fans who had come to depend on a yearly fix of summer camp slaughter. Then again, maybe four films that were practically the same should be considered enough. Yeah, I didn’t buy that then or now but regardless, at the time it looked like the final curtain was really falling on Jason’s reign of terror.

Director Joe Zito, of The Prowler fame, was hired to direct and his proven skill at making great slasher cinema would be an asset to The Final Chapter. Along with scripter Barney Cohen and creative input from Boston-based money man Phil Scuderi, Jason’s endgame was mapped out. One thing I admire about The Final Chapter is that there’s no importance placed on explaining whatever lingering mysteries the series offered. This wasn't taken an opportunity to give fans any answers. In fact, it doesn't even seem to have been made by people who were aware that there might have been any questions to begin with. Jason himself is still as inexplicable and implacable as ever. He’s apparently dead when the movie begins – at least dead enough to be taken to the morgue – and then after awhile he gets up and starts killing again. That’s it. And that’s how it should be, damn it. We know Jason’s not really dead and it’s unimportant to the movie how he manages to overcome his final slumber. We don’t need any lightening bolts, we don’t need any occult rituals, we don’t even need any fucking words said about it. If this movie were made today, of course, the screenwriters would be compelled to come up with some mystic, supernatural horseshit or some kind of backstory about the Voorhees bloodline. Thankfully, The Final Chapter was made before fans started demanding that kind of crap and it was made by people who had no patience for nonsense, either. This was the last chance for Jason to do what he did best. Why waste time on anything else?

The only bone The Final Chapter throws towards stoking the larger legend of Jason is with the character of Rob (Erich Anderson), the amateur hunter who thinks that he can kill Jason on his home turf. I always liked this character as it played up Jason’s aura as some kind of modern myth. Given the time line of Friday Parts 2-4, however, Rob’s status as a Jason Hunter Extraordinaire doesn’t make much sense. It’s the murder of his sister Sandra (the bottom half of the shish-a-bob kill in Part 2) that put him on a path of vengeance but while it seems like Rob’s been hunting Jason for years, chronologically his sister died just two weeks ago at best. Sure, in the real world, we’d been watching Jason wasting teens for four years but in the movie world, the events of Parts 2-4 happened virtually on top of each other. But whatever, Rob’s still a helluva guy and I'm glad he's in The Final Chapter.

What’s really great about this character, though, is how utterly useless he ends up being. Here’s a guy who’s whole self-appointed purpose in life is to put Jason down for good. He’s young, he’s fit, he’s armed for big game. Shit, this guy’s prepared. But yet he suffers one of the most epic fails of any character in the series. I’d like to be able to say Rob gave Jason a run for his money, but that’s just not true. Jason butchers him without even breaking a sweat. Rob’s death scene is one of the best of the series – not because of any splatter FX but because it’s just so harsh. Some might find Rob’s cries of “He’s killing me!” as Jason flays him to death with a gardening tool to be corny but I’ve always thought it was one of the most chilling moments in the series. It’s the most human, the most real, reaction of any Friday victim. If only Rob was half the hunter he thought he was, he would've played things a little bit smarter (here's a life-saving tip for future Jason Hunters: dark basements are Jason's friend).

To add insult to (terminal) injury, where macho Rob failed, a lame kid succeeded. Back in the day, when I heard that a kid was going to be the one to kill Jason, I was a little skeptical on how that would play out. It just didn’t sound so cool to me. But Corey Feldman’s Tommy won me over. The obvious homage to Tom Savini was appreciated and from the beginning, Tommy was more bent than he was precocious. I love his attempt to psych out Jason by making himself look like Jason as a kid (a move that echoed back to Ginny’s similar maneuver in Part 2 - apparently Jason’s Achilles’ Heel is mind games). It was a risky stunt but lucky for Tommy, Jason is genius at killing people but incredibly dense in every other way. He’ll catch on to your game eventually but being able to stop Jason just for a few seconds is an accomplishment few can boast about. Take a bow, Tommy! 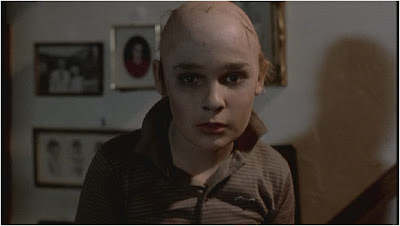 Jason’s actual death (however temporary it may have been) was depicted by returning FX hero Tom Savini and boy, did he deliver. The slide down the machete as Jason's face twitches is just awesome. This was the first Friday I saw in the theaters and that moment got an enormous reaction that I'll never forget. Savini originally had lobbied to have Jason die by a microwave device of Tommy’s invention that would’ve melted Jason’s head but I think the producers were right in feeling that would’ve been too 'sci-fi' for Friday the 13th. I think in the Final Chapter it had to be shown that those who live by the machete, die by the machete. 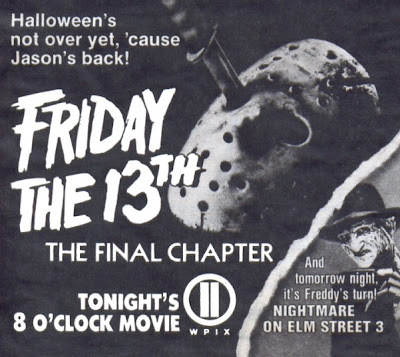 As much as I remember the cheers that greeted Jason’s glorious end, I also remember the round of groans and knowing chuckles that met the final scene of Tommy and Trish in the hospital. As soon as the film froze on Tommy’s intense stare, the whole theater knew they’d been had by this "Final Chapter". Not that anyone was complaining about it, though. After all, who ever wants to see a good time end? As good times go, The Final Chapter remains one of the best. Savini’s work here isn’t always exemplary (some effects reflect a rushed effort - Savini was hired late in the production) but it still has his signature touch. And while the previous three films hadn’t been known for letting their characters off easy, The Final Chapter was nothing short of brutal.
But I don't think it's because the kids in this film die in any more sadistic ways than the victims in past Fridays did but it's just the presence Ted White has as Jason that sells these moments so well. When he destroys someone (like when he mashes Peter Barton's face against the back of the shower wall), you really believe it. 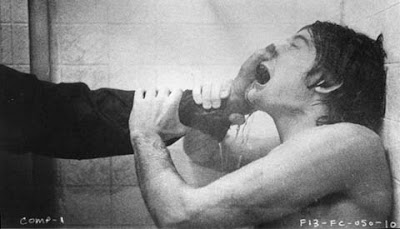 Previous Jasons Steve Dash and Richard Brooker were both excellent in their own right but White’s Jason is the one you really don’t want to fuck with. It’s common to hear some people say that the Friday the 13th's were never scary to begin with but I totally disagree. If nothing else, they were a lot scarier in their day then the Saw films are now, that's for sure. Jason may have turned into a more cartoonish figure with Part VI and the subsequent sequels but before that he was menacing to behold and White’s Jason, especially, was a real force to be reckoned with. 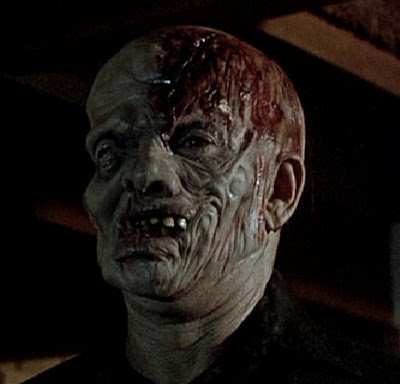 If this had been the real Final Chapter, it would’ve been a fitting cap to the series and at four films, the producers could still claim a legendary run. I'm glad they didn't quit as hope always spring eternal that the series will recapture its magic. But as a fan, I have to say that although I continue to love and follow the films, everything since Tommy delivered the final blows to Jason - and the screen faded to white for the last time in the series - has felt anticlimactic.

"The Final Chapter" is my favorite Friday flick. The Savini F/X, and the pure 80s vibe are what defined the series for me. Love that corkscrew scene.....

Things really came together for the series on this one. I think it's the favorite of a lot of fans. I love it, but it just falls a couple of notches down for me.

Did you know that the Friday the 13th tv Series ran for three seasons, from 1987 to 1990.My friends loves watching the TV series
s