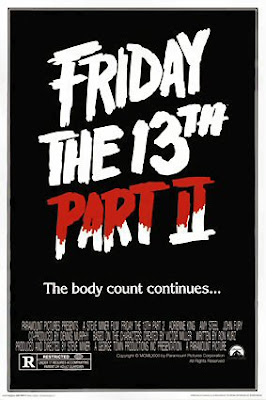 Friday the 13th fans tend to favor the movie that they started off with no matter what. For me, that means loving Friday the 13th is always going to come back to Friday the 13th Part 2. Luckily, this first sequel really is the best of the series. Some view Part 2 as an odd-man-out entry because Jason is sporting his Elephant Man sack here (a look also reminiscent of the hooded killer in The Town That Dreaded Sundown) rather than the iconic hockey mask but that sack has always worked for me. Sack head Jason forever! With Part 2, Steve Miner took over as director from Sean Cunningham after serving as associate producer on the original and in his first feature directing gig he brought his A-game and turned the surprise success of Friday the 13th into a series to be reckoned with.

Well before I saw Part 2, I saw the cover of FANGORIA issue #12 that featured a pic of Mrs. Voorhees' severed head in the refrigerator (this was back when FANGORIA was proudly sold at my local Jane Alden convenience store - those were the days!). That cover blew me away and I couldn't wait to see the movie. At the time I hadn't even seen the first Friday yet but my best friend had just gotten cable installed in his neighborhood and so our day was coming.
Shortly after Part 2 made its pay cable premeire, we chose a weekend to do a sleepover when we knew Part 2 would be airing. Because his parents would know we were up watching something we shouldn't be if we watched the earliest scheduled show of the night, we had to wait till the 1:00 am showing. Around 12:20 or so, our curiosity got the best of us and we decided that we had to take a peek at the ending of the movie. We were paranoid about being heard so we got right up on top of the TV with the volume low. It was the scene towards the end where Ginny and Paul are back in their cabin and they hear a scratching at the door. Ginny holds a pitchfork in front of her, braced for whatever may burst in as Paul whips open the door to reveal an adorable little puppy. Just then Jason explodes through the window behind Ginny. My friend and I leaped back at least ten feet in the air, then scrambled back to the TV to shut it off. It was then that my friend and I started to have serious second thoughts about watching the rest of the movie.
When 1:00 am came and we put the TV back on, we were a little less sure about our decision then we had been earlier in the night. And the opening sequence did nothing to put us at ease. Even knowing ahead of time that Mrs. Voorhees' head would be in the refrigerator, the pre-title sequence had me cowering. I even jumped at the cheap scare of a cat jumping through the window. And the clips from the original Friday were terrifying, too, as we hadn't seen any of that movie yet. By the time the titles came up, we were convinced that if the movie began like this and ended with the scene we saw earlier, then this had to be the scariest movie either of us had ever seen.
By 2:30 or so, as the credits rolled over a freeze frame of Mrs. Voorhees' head, I don't know if we still thought we had seen the scariest movie ever - as it turns out, save for the wheelchair death of Mark, the beginning and the end were by far the best parts of the movie - but we sure as shit had enjoyed ourselves. From that night on, I was a diehard Friday the 13th fan. As much as the series has had its ups and downs over the years, I can't shed my affection for it. As for how Part 2 holds up today, I think that in almost every way, it's an improvement over the original (even though it's impossible to best the climatic decapitation of Mrs. Voorhees and Jason's leap from the lake). Working in Part 2's favor is the fact that Miner's a sharper director than Cunningham, the cast is a little more polished (without being overly slick) and the pace is quicker than that of the original without being as rushed as the later entries of the series would become. Miner also avoids the more overt corniness of the original (no Strip Monopoly here) and his lead actress, Amy Steel, is hands-down the best of the Friday girls. I love Adrienne King as Alice but Steel's Ginny really has it all. She has such a natural appeal - she's tough, beautiful, resourceful, and athletic. Had Steel stuck with the series for another outing (or had done another horror film that was stronger than 1986's April Fool's Day), I think she'd be more widely appreciated as a classic Scream Queen. 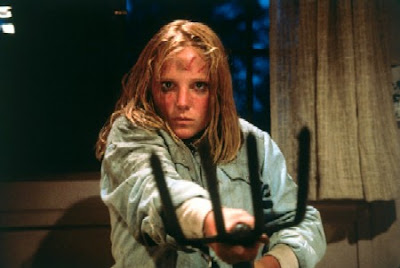 While I think Ted White's Jason from The Final Chapter takes the golden machete for Best Jason, I love Steve Dash's Jason too (with his signature lopping run) and Part 2's overall depiction of Jason as a resourceful - but not indestructible - backwoods psycho is my favorite handling of the character. The concept of Jason keeping his mother's head on a candle-lit shrine (surrounded by the bodies of the victims he claimed in her name - including Alice's decayed corpse with the ice pick still in her skull) was perfect and it said all that ever needed to be said about him. I also think that make-up man Carl Fullerton's design for Jason (as worn by Warrington Gillette) remains the best that's been done, looking grotesque without going over the top. Truly a face only a mother could love. 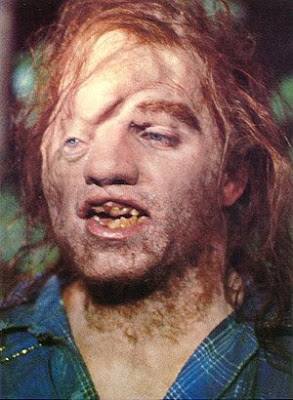 The final chase between Jason and Ginny is still the best in the series. Miner squeezes a lot of excitement out of this long sequence (that begins when Ginny detects the crouched figure of Jason moving towards them in the dark of the main cabin - "Paul, there's someone in this fucking room!"). And Ginny's stand-off with Jason as she uses her child psychology training to get into Jason's head is a classic moment, giving Dash a chance to deliver more of real performance than other Jasons as he bows before the image of his approving 'mother'.

In a perfect world, the MPAA wouldn't have forced Miner to excise the now-legendary FX footage of Sandra and Bill's shish-ka-bob demise but that's just the breaks (and in a slightly more just world, Paramount would've reinstated the footage by now). Part 2 is still solid without it, though, and whatever it's faults Part 2 earns the distinction of being the film that turned Friday the 13th into a successful franchise. Had Miner and co. made different choices with this film - had they not gone with the idea of introducing Jason as the killer, had they abandoned the formula of the first film instead of striving to refine it, then we wouldn't still be going back to Camp Crystal Lake all these years later.

Jeff, you nail all the key points as to why Part 2 is such a great entry in the FT13 series: Sack Head Jason, Amy Steel, the ghoulish shrine to Mrs. Voorhees, the wicked (albeit MPAA-hobbled) kills, even the cheap scares. And Jason crashing through the window at the end sent ME airborne, too.

Thanks, FF! Glad you liked the write-up. I've probably seen Part 2 more than any other horror movie. It's always irresistible nostalgia for me.

Amy Steel is the best!