A Date With Doomsday 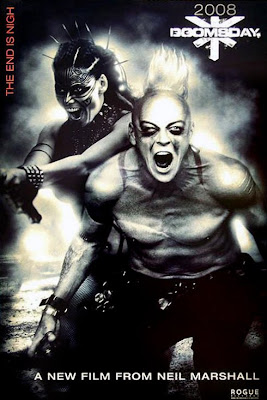 Sadly, Doomsday - director Neil Marhsall's love letter to the post-apocalyptic actioners of the early '80s - has probably disappeared from all but a handful of US theaters at this point but I'd like to give it a belated mention as one of the more pleasant cinematic surprises of 2008 so far. I'll admit, when I noticed that the tagline for Doomsday was "Mankind has an expiration date", I had the kneejerk reaction of "yeah, and this movie has an expiration date, too - 1982!" Of course, Doomsday had already sold me a ticket based on the fact that my own expiration date happens to be 1982 as well but honestly, I had to wonder: was there enough people out there clamoring for a thickly laid homage to The Road Warrior, 2019, After the Fall of New York, 1990: The Bronx Warriors and Escape from New York to make this movie worthwhile? Well, after seeing Doomsday I was just glad that Marshall didn't let such stupid questions keep him from making his movie. Doomsday has taught me that when a studio is willing to spend their money for you to get your geek on, you just do it. So the movie flops - so what? What a dumb thing to care about, right?

While Doomsday 's trailers and teasers had me bracing for a real eyesore, production-wise, I felt the film looked much better on the big screen than I was expecting. Marshall didn't squander a dime of Doomsday's budget and as a result, the film looks more intentionally gritty than it does impoverished. I was also surprised at how intense the action was. There’s several scenes depicting the crazed denizens of a long abandoned, virus-striken region swarming over the small band of soldiers who have entered looking for a cure for the Reaper virus (what else would they call a virus in a movie like this?) that are genuinely gripping. And the action and the film’s settings are more varied than the ads would lead you to believe as well. It’s not all about car chases and urban squalor. There’s some great sequences later in the film that take place in and around a coverted castle that give the movie a visual breath of fresh air.

Doomsday’s lead, Rhona Mitra, is set up as the film’s Snake Plissken figure and while she does all right, she’s no Snake. In line with that, Doomsday’s main problem is that in every way it isn’t in the same league as the movies that it idolizes. There’s a climatic car chase that’s clearly indebted to the final chase in The Road Warrior but isn’t even close to matching George Miller’s still-jaw dropping sequence. And Marshall should’ve come up with a last shot as iconic as the end of Escape from New York with Snake walking away, destroying the tape that holds the world’s fate in the balance, as the distinctive beats of Carpenter’s synth score rise on the soundtrack. With Doomsday, after its final car chase (bonus points to Marshall for using the Frankie Goes To Hollywood hit "Two Tribes" here), the movie half-heartedly sputters through a couple of scenes and then the credits roll.

That’s not to say that Doomsday on the whole isn’t enormous fun. Sure, it may only be a pastiche of earlier - and for the most part better - films but it’s the only pastiche of this particular rank of films that’s out there right now and the only one likely to be made for some time. Even though an eternity of heavy rotation on cable likely awaits Doomsday, Marshall clearly made this for the fans so it's disappointing that more of them didn't come out to support it on the big screen.

I definitely liked Marshall's previous films - Dog Soldiers and The Descent - but this is the first one that's really made me excited about what he might do next. That’s not to say that this is his best film, but it’s the first one to make me think that if someone keeps giving this guy bigger sandboxes to play in, he’s going to really deliver and his films won’t look like processed Hollywood ’product’.
Posted by Jeff Allard at 10:52 AM No comments:

"For He's A Jolly Good Fellow" 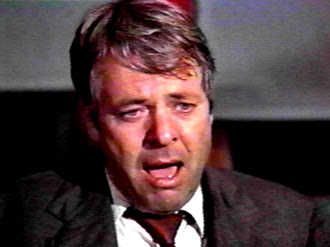 Even as a young kid, when I watched the original Twilight Zone in syndication, I found myself especially drawn to a handful of memorable Rod Serling-penned TZ episodes that involved distressed and despondent middle-aged men. In episodes like "Walking Distance" and "A Stop At Willoughby", Serling presented protagonists who were at the end of their personal and professional ropes. The lead characters in these episodes were business men who had spent their adult lives fighting for space on the corporate ladder and had only a gnawing emptiness to show for it. For me, these shows were among the finest to go out under the TZ banner - bringing out the best in Serling. For whatever reason, the dilemma of these harried men who want to leave behind the grind of the present for a bucolic past was a topic that Serling really warmed up to.
Years later, during the first season of his swan song program Night Gallery (which ran on NBC from 1970 to 1973), Serling revisited the thematic ground of "Walking Distance" and "Willoughby" and outdid his previous work by penning the stand-out Gallery episode "They're Tearing Down Tim Riley's Bar". Without writing towards an ironic twist, Serling simply poured his guts into this dramatic script. While the protagonist here may be seeing people from his past, it's clear that these are the products of his melancholy mind, rather than actual ghosts or spirits. We know that the supernatural will not be intervening here.
Familiar character actor William Windom (most recognized by genre fans for his role as Commodore Decker in the original Star Trek episode "The Doomsday Machine") plays Randy Lane, a 48 year-old salesman for a plastics company who is well aware that his best days are behind him. Lane is a widower and while his secretary (Diane Baker) is devoted to him, he's essentially alone. His assistant (Bert Convy) is gunning for Lane's position and Lane doesn't have either the energy or the means to deflect the kind of cutthroat maneuvering that's aimed at him. And even without someone looking to push him aside, Lane is so disenchanted with his job and his life that a seemingly irreversible spiral is in effect. But it's the news that the city is due to tear down a longtime local watering hole that has Lane desperately pining for all the dreams that never came to pass.
When Lane returned from his stint in the service as a paratrooper in WWII, a homecoming party was hosted at Tim Riley's bar with family and friends fondly serenading Lane with a rendition of "For He's A Jolly Good Fellow". Riley's bar was also where he took his wife on their first date. Even though the bar is closed, its physical presence is an enduring brick and motar connection Lane has to a once-promising past that gets further and further away with every year. And the news that this landmark is about to be leveled ("just an old eyesore that they're going to tear down pretty soon", as he informs his secretary) is devastating.
Serling's script is impassioned, poignant, and Windom makes Serling's every word count in a heartbreaking performance. Lane doesn't come across as a self-pitying loser, but rather as an innately decent man who knows that the life he wanted for himself is forever out of his reach. At one point, as he breaks down in an acquaintance's arms, he sobs: "I shouldn't be hustled to death in the daytime and then die of loneliness every night!". And these words don't sound theatrical or melodramatic, they sound true - a cry from the heart. Serling was a master at writing dialogue that was poetic but yet still sounded like it was meant to be spoken.
If this episode's conclusion happens to run towards the implausibly upbeat, I'm willing to let it go under the assumption that Serling simply didn't want to be responsible for the inevitable spike in the national suicide rate if he didn't some way to put a silver lining in this story.
"They're Tearing Down Tim Riley's Bar" aired in 1971. Four years after the show aired, Serling passed away due to complications from a coronary bypass operation in 1975 at the age of 50. His Emmy-nominated screenplay for this episode is poignant proof that of all the outre nightmares and anxieties given airtime on both Twilight Zone and Night Gallery during their memorable runs, the one thing that Serling himself found most frightening was the slow, steady passage of time. As Lane says with wistful regret, "Rest in peace, you age of innocence...we shall not look upon your like again."
This episode can currently be viewed online for free. Click this link to see "They're Tearing Down Tim Riley's Bar" and other vintage Night Gallery episodes.
Posted by Jeff Allard at 9:49 PM No comments: