I've Got It All On Video 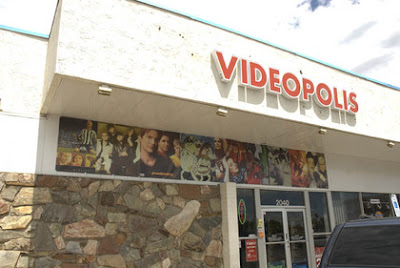 Video stores were the backbone of my adolescence during the ‘80s, allowing me to indulge my love of horror movies in ways that I never imagined. And watching these stores and the VHS format vanish from the face of the earth in the wake of DVDs and Netflix makes me feel like my past is in the process of being gobbled up by those hell-spawned Pac-Man things from Stephen King’s The Langoliers.

My stepdad didn’t buy us our first VCR until ’86 but for several years before that he’d rent a player for the house for two weeks during the Christmas holidays and to remember having just those two short weeks in an entire year (!) to see whatever videos I desperately wanted to see (Texas Chain Saw Massacre, Dawn of the Dead, Deep Red, Zombie) is mind-blowing to me now. Of course, once we finally had a VCR of our own I was in horror heaven.

Thanks to the home video boom, there were several mom and pop outfits near my parent’s house to choose from (none of which cared if under-aged kids rented R or unrated films) and I spent many months exhausting each store’s back catalog of horror titles – experiencing ‘80s favorites like Cannibal Holocaust, Make Them Die Slowly, Dr. Butcher M.D., The Evil Dead, Burial Ground, Gates of Hell, Razorback, From Beyond, Scarecrows, Xtro, and Alone in the Dark for the first time.

Years later, when I started working at a video store myself post-college (where else would someone with a liberal arts degree get a job?), I felt like I had lucked into the ideal occupation (what can I say – I have low aspirations!). I worked for a locally owned and operated video chain called The Movie Shops and even though the home video industry had already peaked by the mid-‘90s, the market was still strong enough that I didn’t see an end to my dream gig in sight.

But by the late ‘90s, I knew all too well by our sluggish sales that the rental industry was eroding. It was discouraging to see it happen but even if the small guys that I was aligned with went under, I didn’t think that video stores themselves were going to dry up and blow away. After all, people still would want to watch movies at home and to buy new release VHS tapes was cost prohibitive except in rare cases when a title would be priced to own on street date. Call me naïve but I thought VHS was sacrosanct.

At the time, though, besides my job at the video store I also worked at a local Media Play outlet and one day, a small section on the back wall of the video section was opened up for a new product called DVDs. When I first heard about the coming of DVDs, I scoffed – believing that they’d never push laserdiscs aside in the hearts of collectors (as Kevin Smith famously kickstarted his Clerks laserdisc audio commentary: “Fuck DVD!”) and that they wouldn’t encroach on VHS as the general public wouldn’t feel the need to upgrade their collections to a whole new format (as I reasoned – “who’s going to buy all their movies over again after spending so much time and money on VHS?”).

But affordability and convenience can’t be ignored and soon that little DVD rack on the Media Play back wall (I wish I could remember what titles were on it – but I think that Lost in Space and the John Travolta film Michael were two of them) started to evolve, causing the store’s fairly sizable laserdisc selection to steadily diminish. And once that process started, it wasn’t long before laserdiscs had been permanently kicked to the curb.

Maybe because I never owned a laserdisc player it didn’t hit me so hard to see the format phased out (although I always loved the hardcore love of movies that it represented). But somehow the overtaking of laser by DVD still didn’t foretell the death knell of VHS to me. I thought that three had been a crowd but now with laser gone, that DVD and VHS could peacefully co-exist. But that wasn’t meant to be (in case you haven’t noticed, I’m something of a slow-on-the-uptake, can’t-see-shit-in-front-of-my-face kind of guy). Now here we are less then ten years later and there’s a generation of kids about to enter their early teens for which movies have always been available – and preferable – on shiny silver discs.

But from day one, there was an appealing vibe of archeology attached to VHS that DVD has never shared. The horror sections of the stores I went to as a teenager always occupied cramped back corners and I vividly recall being crouched behind shelves, pouring over every lurid title (Spasms! Hospital Massacre! Incubus!). And perhaps because their shape evoked books, VHS carried a subliminal romantic quality for me as well (and many of the mom and pop establishments I used to go to had wooden shelving, lending an additional library-like feel to their stores).

Of course I expect I’ll be nostalgic for DVD one day too – once the day comes when no one buys physical copies of movies anymore, when people just download all their media. Some might say that next step is an improvement – taking the unnecessary clutter out of movie collecting. But why would anyone collect anything if they didn’t like a little bit of clutter in their lives?

Looking around the newly converted DVD-only rental selection of one of my local “video stores” several weeks ago and seeing the remnants of their once-proud VHS past stacked in discount sales bins, I couldn’t help but think of how excited I was twenty five years ago when my stepdad hooked up that first rented VCR to our 18 inch TV and introduced us to the magic of VHS (“Look, you can stop it anytime you want!”). As soon as I saw that first videotape cue up, I knew that my already movie-obsessed life had taken a profound turn.

And as I stood in this now disc-only store thinking about how it was possible that video could have vanished, I looked at the young employee behind the counter and it dawned on me that this kid hadn’t even been born when the store he was now working in was first opened. And then I realized with DVD-worthy clarity, “Oh, yeah – that’s how. I’m old.”

Email ThisBlogThis!Share to TwitterShare to FacebookShare to Pinterest
Labels: VHS

Still have fond memories of the Movie Shops days.

Love your stuff - keep it up.

Either way you cut it, Scott, we're both a little long in the tooth! Ah, well. Those Movie Shops days were definitely a good time.

Thanks for sharing this wonderful memory of a wonderful time for many of us.