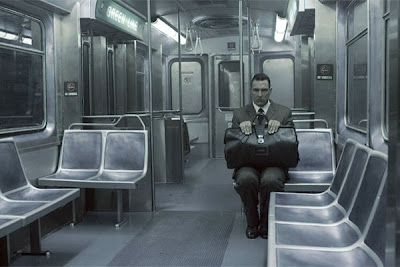 The fate of Midnight Meat Train as the official moniker of the upcoming Clive Barker adaptation has been looking iffy for months now. Apparently, some tragically juvenile theater goers were finding this innocent title more humorous than Lionsgate liked which led to speculation that the skittish studio had decided to avert disaster by taking out the obvious source of unwanted humor and going with the far less hilarious handle of Midnight Train.
I wasn't happy to hear about this potential title change but I was willing to be sanguine about it. After all, why risk alienating a potential wider audience who can't get past the title? But the latest reports confirming that "Meat" isn't being pulled after all is good news. I don't know why Midnight Meat Train sounds so right, it just does. I can barely remember the content of the short story, having last read it about twenty years ago but that title has always stuck with me and I always thought it was bad-ass - whether it be for a horror movie or a gay porn flick. Either way, it's an enticement.

I'd like to think that Lionsgate had to go through an elaborate marketing process to determine whether "Meat" was in fact the cause of all the intended laughter. You know, maybe they thought Midnight Meat or Meat Train would somehow be the cure to stop the snickering. Whatever the case, I'm just glad that Meat is back in the Midnight Train sandwich - right where it belongs.