Dark Night of the Scarecrow 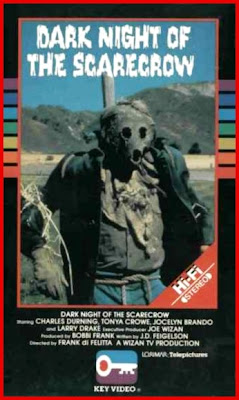 Drenched in irony and justice darkly met, 1981's Dark Night of the Scarecrow boasts a level of writing, acting and atmosphere that belies its TV-movie origins. Populated almost exclusively with character actors closer to collecting their Social Security checks than their High School diplomas, the presence of such seasoned pros at the service of a script (by J.D. Feigelson) that evokes the feeling of a tale told at midnight establishes Dark Night of the Scarecrow as an accomplished autumnal treat. And the news that this cult favorite is due to finally make its way onto disc is cause for celebration.
The one youthful face found among Dark Night's older-skewing cast is child actress Tonya Crowe as Marylee Williams, a small town child whose best friend is Bubba - a kind, 36-year-old simpleton whose age and enormous girth hide a child-like intellect. The small but pivotal role of Bubba is played by Larry Drake, who went on to win accolades for his portrayal of another mentally challenged man in the '80s TV drama L.A. Law while genre fans will recognize him both as Darkman's Durant and as the mad medico Dr. Giggles. The innocent friendship Crowe's Marylee shares with Bubba is the tragic catalyst that sets Dark Night's events in motion.

The town mailman, Otis P. Hazelrigg (played by Charles Durning) spies on Marylee and Bubba at play and convinces his good ol' boy buddies (Lane Smith, Robert F. Lyons, and Claude Earl Jones) to see Bubba as a threat to Marylee. And so when the girl reportedly turns up dead after last being seen with Bubba, that's the only excuse Otis needs to organize his three friends into a bloodthirsty posse.
A terrified Bubba runs for protection to his mother's rural home and she tells him to evade Otis and his men by playing 'the hiding game'. But after a prolonged search, Otis and his men find Bubba disguised as a scarecrow hung on a cross in a field. We see Bubba's frightened eyes behind the burlap sack and the four armed men ruthlessly shoot the defenseless Bubba. Just moments later, the call comes in over the CB that not only is Marylee alive but that she was earlier saved - by Bubba - from an encounter with a vicious dog.

With the notion of coming clean not an option (and with its four friends guarding a guilty secret only to have it prove to be their undoing, this was the I Know What You Did Last Summer of its day), Otis makes it look like Bubba had a weapon on him (a pitchfork) and convinces his friends to back each other's lies.

This pays off when they're acquitted of any wrongdoing and walk out of the courtroom weeks later as free men. This miscarriage of justice only makes Otis and his pals all the more smug. But as Bubba's grieving mother tells them - "There's other justice in the world besides the law!". And so it is that before long, one of the four men sees a scarecrow take up grim residence in his field. The night after seeing the scarecrow, this man falls victim to a fatal accident involving the wood chipper outside his barn. One by one, the scarecrow will appear to each of them and herald a reckoning - unless they can track down whoever it is that's taken it upon themselves to make them pay for their crime.

One would think that Feigelson and director Frank De Filetta would've played up the potential mystery angle and offered up some viable suspects as to who could be the vigilante - like the outraged District Attorney who served as prosecutor at the trial, for example (the only person in the film who feasibly could be pursuing these men, ruling out Bubba's diminutive, elderly mother and Marylee). But no real red herrings are provided. Although the four men will look for someone to blame, the film gives us no reason to question that the specter of Bubba is pursuing them (as Marylee tells Bubba's mother: "Don't worry Mrs Ritter, Bubba's not gone - he's playing the hiding game ..."). And while the death scenes are to the bloodless standard of television censors in the early '80s, they're still satisfyingly staged. Filetta really lets us savor the terror of these men - their crime was heinous and none of them pay an easy price for it.

But even though the four 'protagonists' are all murdering bullies and cowards, thanks to the expert acting of its veteran cast we feel involved in their fates. Durning manages to portray Otis as despicable (we learn through the course of the film just how base he really is - with a suggestion that he may yearn to act on pedophile urges) and yet he imbues the character with enough charisma that we're able to - not sympathize with - but at least to feel we have a stake in his ordeal. And while this may be the best example of the slight but popular 'killer scarecrow' sub-genre (sorry, Scarecrow Gone Wild!), the irony is that we never see the scarecrow move (save for two shots left for the end of the film) or stalk its victims. This isn't like Scarecrows (1988), in which we see a whole gang of sack-headed slayers. Here it's all suggestion.

There isn't even a distinctive shadow seen creeping along a wall or a close-up of a straw-stuffed hand reaching towards a victim. Until the very last seconds of the film, we just see the scarecrow spread-armed on its cross in the field like a portent of doom. But it works. Like a horror movie that's so cannily edited that viewers will swear they saw more blood than was actually in the film, I'm sure many fans believed they saw much more of the scarecrow in action than is actually on screen in this film. I know that when I had a chance to see this again as an adult that I was stunned to realize how little of the scarecrow we truly see.

Originally aired on October 24, 1981, at a time when theatrical horror was in the midst of the '80s slasher boom, the restrictions of TV dictated that Dark Night of the Scarecrow be an example of 'classic' horror, relying on mood. And yet, it now feels far less dated than many of the more graphic films of its day. From its script, to its caliber of acting, to its atmospheric direction, Dark Night of the Scarecrow is best described as timeless. It remains one of the witching season's finest fables.
Posted by Jeff Allard at 4:33 AM

Email ThisBlogThis!Share to TwitterShare to FacebookShare to Pinterest
Labels: Dark Night of the Scarecrow

Glad to hear this is coming out and I can get rid of my crappy bootleg!

Yeah, I can finally retire my VHS copy. Can't wait to give this disc a spin.

Good news... I've never seen this but I've seen it on people 'favorites' lists for years...

Dark Night is one of the greatest achievements in television horror. It's a fine example of the best of what television was putting out back then (and there's some truly good stuff). My two favorite Charles Durning TV movies are this and Queen of the Stardust Ballroom. Talk about talent. His roles in both films couldn't be more different and he walks into both of them with ease.

I agree, this movie has aged particuarly well. I'm glad it will (finally) come out on DVD because if any one film deserves a wider audience, it's Dark Night.

I never saw Queen of the Stardust Ballroom but I'm definitely a big Charles Durning fan. I haven't seen him in anything lately but I guess I just haven't been paying attention because according to IMDB he's been as busy as ever. Glad to know he's still around.