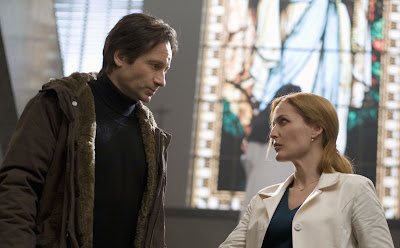 My reaction to The X-Files: I Want To Believe wasn't quite as ecstatic as the exclamation point in this blog's title suggests but I definitely let out a relieved sigh early on in the film when I knew that I was feeling the vibe of an authentic X-Files case again. And throughout the rest of the film's running time, I continued to feel that my faith had been restored. In fact, I felt slightly embarrassed to have been so skeptical of the film in the first place. It's not an outstanding film, it's not spectacular (especially not by summer movie standards), and it wouldn't even place in my top twenty of the show's episodes - but it is engrossing for the most part and it gives us a new Mulder and Scully adventure that feels like more than just nostalgia. My only gripe would be that Mulder and Scully don't really do much investigating together per se but it's their bond that drives the picture.
After watching I Want to Believe, I'm totally ready to chastise 20th Century Fox for forfeiting this movie's already slim commercial chances in the middle of a grueling summer season. I don't think it ever would've been a huge hit but it could've been a modest success in the fall or late winter (this is a January movie if I ever saw one) rather than the flop (a small scale flop, perhaps, but a flop nonetheless) that it ended up being. Series creator (and director and co-writer of I Want To Believe) Chris Carter probably needs to shoulder some blame as well - I don't know if the intense secrecy around this movie was solely his call but it completely backfired, in my opinion.
In an ideal world, it'd be better for people to find out only once they're in the theater itself that they've come to watch a movie about Gay Russians involved in black market organ harvesting and Frankenstein-like experiments but for some of us, knowing that kind of info ahead of time is what might motivate us to buy a ticket. Carter and co-writer Frank Spotnitz didn't quite get as bizarre with this storyline as I might've hoped but even with not taking it as far as they could've, it's still a movie about Gay Russians involved in black market organ harvesting and Frankenstein-like experiments so it's not the usual multi-plex fare, that's for sure. Add a pedophile priest who sees visions on top of it and it's suddenly not hard to see why 20th Century Fox might've failed to market this with much enthusiasm. But I give credit to Carter and Spotnitz for telling a story they, well, believed in.
I just wish that Carter and Spotnitz had more time to finesse their story as this only ranks as an average-to-sub-average episode of the show and it had the potential to be much more. Part of the failing is that the villains are intriguing but aren't given nearly enough development. Another is that the climax is too limp - the slow burn approach taken by Carter is fine but there should've been more of a pay-off. Also, it's a bummer to see Mitch Pileggi return as Walter Skinner only to see him given absolutely nothing to do. His one and only scene with Mulder cries out for something more between them - even just a funny line - but it never comes. I just wonder if the writer's strike hampered Duchovny and Pileggi from improvising a better moment between their characters than what was on the page.
But the film's faults aren't fatal ones. And I much prefer this over the first X-File movie, the enervating Fight the Future (1998). It's a challenge for this to feel exactly like a classic X-Files adventure with Mulder and Scully no longer working as FBI agents but I Want To Believe is a satisfying continuation of the show. Anderson and Duchovny are still a winning pair and at its best, I Want To Believe made me realize how much I'd missed their mutual passion - not just for each other but for their work in saving lives. Even though she's mostly out of the loop of Mulder's investigation, Carter and Spotnitz give Scully a pertinent subplot concerning her efforts as a doctor to save a terminally ill child (not as mawkish a storyline as it might appear). As we see both of them stubbornly persisting when the world is telling them to give up, we're reminded that where ever life might take them, both Mulder and Scully will continue to be the patron saints of lost causes and unpopular opinions. After the failure of this movie to make The X-Files a viable commercial property again, The X-Files itself can be considered its own lost cause but I hope Carter won't give up on trying to bring it back again one day.
It'd be a shame if this was where Mulder and Scully's journey had to end but if it is, I feel like it leaves them on a much better note than the last episode of the series did. For me, it's the dark horse of the Summer of '08 - a film that'll have to wait to find more believers on DVD.
Posted by Jeff Allard at 9:34 PM

Email ThisBlogThis!Share to TwitterShare to FacebookShare to Pinterest
Labels: The X-Files

I really enjoyed this film, it was a tonic for a summer of over-the-top-crap that is filling the theaters.

Yes, it's just a shame that it got thrown under the bus by Fox. And the knee-jerk trashing it's gotten from most critics hasn't helped. It's not a perfect film by any means but it deserves more credit than it's gotten so far.

I really loved this movie. I thought the main organ harvesting story was OK, but the chemistry between Duchovny and Anderson still remains insanely strong. I also like this film continues with Scully's constant wrestling between faith and facts. Well, facts isn't a great word, but in the face of pretty strong proof in many episodes, she still took the opposite side. I know some fans were frustrated by that, but I think when people are brought up one way, it's so hard to actually face the hard questions and answers. Here she has many, being a doctor in a Catholic Hospital treating a patient who probably needs to be allowed to die with as little pain as possible. We know she's symbolically trying to save her son who died and sometimes what is best isn't what she thinks is right. Or is that letting the boy die is just easier and Scully is the only one willing to fight for him? To me, this story was the crux of the film, and even through it all, we are still not given solid answers (does he make it? The ending credits imply that she just left him to die, but right before the end credits she's peforming the controversial operation...).

Dana Scully may well be one of the most engrossing and complex characters television ever saw and I praise Sponitz and Carter for not going easy on her in this movie.

I understand the complaints that this wasn't the real kick-in-the-ass that some felt the franchise needed to reestablish itself but as an artistic venture rather than a commercial one, I thought it was satisfying. As I said above, I don't think it's perfect but from this fan's point of view it serviced the characters well and tried to be more provocative than a typical summer popcorn movie. And I guess it's reception at the box office shows where that gets you!

The ambiguity at the end in regards to the child just seemed like par for the course for The X-Files where a decisive end wouldn't have been as interesting. It's enough to know that Scully made that leap of faith to perform the operation. What happens after that is open to speculation.