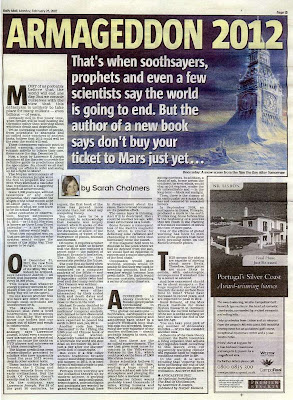 As you may have noticed, it's been unusually quiet here lately. I'm sorry for the lack of activity but I think Barack Obama's landslide Presidential win temporarily took the wind out of my need to write. Or more specifically, the need to write about horror. Over the next four years, peace and prosperity might return to the USA and even if that turns out to be just a case of wishful thinking, for the first time in a long time, life seems less anxious and the future doesn't look so scary.

But while at a screening of Quantum of Solace, I saw a well-timed reminder that the future is always something to fear in the form of the teaser for director Roland Emmerich's upcoming doomsday mega-spectacle 2012.

There isn't much to see here, just a monk in the Himalayas desperately ringing a church bell as a massive tidal wave crashes over the mountains and washes away everything in its path. But I like that the clip utilizes a music cue from 1980's The Shining. As the waves crash over the mountain top, it's to the same music heard in the famous teaser for Kubrick's film where the elevator doors open and unleash a torrent of blood. It might be cheesy of 2012 to appropriate this music for their purposes but I appreciate the fact that both teasers end awash in a cascade of doom.

How do I rate the prospects of 2012 as an actual movie? Pretty low, although that does nothing to diminish my desire to see it. I love movies that feed into half-assed 'real' fears (how well I remember spending the summer of '78 in mortal terror waiting for the killer bees of The Swarm to end Life As We Knew It - after all, it was all over the news how South American killer bees were on their way to North America so it wasn't just made-up crap) and worrying about the end of the world in 2012 because the Mayans said so is about as half-assed as it gets (even though, like killer bees, the Mayan calendar itself isn't just made-up crap). My concerned wife is already wringing her hands over this nonsense and I'm sure this movie will send plenty of people searching for every scrap of info that will tell them where to hide when the shit goes down in four years.

For myself, my only worry is that I'm not sure how the world is supposed to end in this movie and I'd hate to be disappointed. I'm too lazy to look up what the Mayans themselves had to say (even though the 2012 teaser encourages uninformed viewers to "Find Out The Truth" by Googling '2012') and I'm guessing the film takes its own liberties with the prophecies anyhow (because even the best prophecies can stand some juicing up).

I'm just hoping that our global end game isn't all down to an environmental issue, like the Earth shifts orbit and all Hell breaks loose. My feeling is that if the world is ending according to an ancient Mayan prophecy and there isn't aliens involved, why bother? Seriously, I'll be pissed. As end of the world cataclysms go, 2012 is supposed to be the mother of them all (sorry, Nostradamus) so why not go for the whole cosmic enchilada?

I just hope that Roland Emmerich and co. deliver something so spectacular that the forces of the universe will be pressed to come up with something better to top it and have to miss their 2012 date altogether. After all, if 2012 is good I'd like life on Earth to continue so we can see a sequel.
Posted by Jeff Allard at 10:13 PM

I laughed when I saw that trailer. In order to hit the Himalayas that water had to either cover India or China. Any disaster that big isn't going to leave a lot of people around to tell stories about.

Yeah, I have a feeling I'll be laughing a lot during this one. I assume that by the end of the movie, the Mayan calendar will be proven wrong and the end of the world will be postponed to a later date.