It's Like I Told You, Only The Lonely Can Play 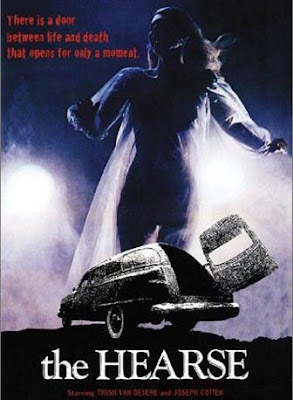 There are no groundbreaking splatter effects in The Hearse (1980) - no exploding heads, no chest-bursters, and no splinters to the eye. What The Hearse has in spades, is solitude. When The Hearse was released, this tale of a thirtysomething woman spending a summer alone in her late aunt's home who finds herself stalked by a ominous hearse, seemed passe in a horror field that was in the midst of being irrevocably altered by the new age of make-up FX. Next to the likes of Dawn of the Dead (1978) and Friday the 13th (1980), The Hearse was old-fashioned - too soft to matter to a new generation of adrenaline junkies. Even Halloween II (1981) had to resort to the kind of explicit violence not found in the 1978 original in order to appeal to an audience of '80s horror fans who were becoming accustomed to the rush of graphic gore. But what once seemed simply tepid now seems like an invitation for reflection. Just as heroine Jane Hardy (Trish Van Devere) goes to her aunt's home to have an opportunity to think about the changes in her life - including her recent divorce and the death of her mother - so to does The Hearse seems like an opportunity to think about the way characters in horror films were once allowed to be haunted people, and not just haunted.

When Jane leaves San Francisco to go to her aunt's home in the small town of Blackford, she's going with the purpose of some soul-searching. In her words, she nearly "cracked up" after her marriage failed and this getaway to a small town and an empty house might be a way to recharge herself. From the vantage point of 2009, what jumps out about The Hearse is how uncluttered Jane's life is. This is a world before cable was a household necessity. Before VCRs and home video game systems were commonplace. Before DVDs, home computers, cellphones, BlackBerries, and the internet - before MySpace, Facebook, and Twitter. To our eyes, which spend so much time scrolling computer screens, Jane might as well be a Luddite. In fact, by modern standards, the whole town of Blackford could be an Amish community. It's so free of everything we now take for granted, it makes the Ingalls family look like The Jetsons.

So many modern ghost films have used the technology we're preoccupied with as a conduit for spirits to enter our world - TVs, video tapes, phones, cameras, etc.. After all, how else would we notice that something new had entered our lives unless it appeared on our web browsers? But in The Hearse, that conduit to the Other Side appears to be Jane herself - ostensibly because of her blood connection to her late aunt. But really, it seems as though Jane's quiet world, with all its empty spaces - both emotional and physical - is just naturally conducive to the supernatural with no special prompts of seances, Ouija boards, or incantations needed. The dead need no ceremony to feel invited. Even though Jane ultimately thwarts the evil force that pursues her, by The Hearse's conclusion, she may as well be a ghost herself. It's possible that she may go back to San Francisco but I think it's more likely that she will take up permanent residence in Blackford, retreating even more into her role as an outsider - free-floating in her own solitude. The fleeting glimpses we see of Jane's aunt peering from an upstairs window seem like less a view of the past than a premonition of Jane's own future - a lonely figure spending her nights furtively looking out from her haunted house.
Even in 1980, The Hearse seemed like a film that hailed from an earlier era. Now everything about is as ancient as parchment. It didn't seem like much then, but all I know is that it makes me feel good now.
Posted by Jeff Allard at 5:17 AM