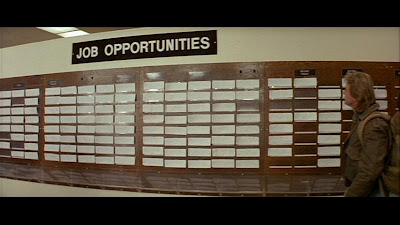 As regular readers may have noticed, things have been slack around here lately. I tried to compose a Drive Angry review over the weekend but it just didn't happen. I didn't care for the movie but I couldn't get motivated to explain why. That means it's been well over a week since my last post and while I'd love to tell you that things will get back on track here soon, I'm not sure they will.

The problem is that I've been unemployed for some time now and the longer it goes on (we're on about the ten month mark now), the more dire my personal situation is becoming. When I first left my previous job due to the company undergoing a change in ownership, I felt good about my chances of finding work.

At this point, though, it's hard to stay upbeat. Recently my hopes shot up thanks to two interviews back to back but neither one yielded an offer and the strain of waiting for another chance at bat - and worrying that each succeeding prospect will similarly fail to pan out - is pushing everything else out of my thoughts.

Since this all began I've been optimistically telling myself that things will work out but being forced to contemplate the very real possibility that they might not - or at least not soon enough to avert financial disaster - is making it hard to give the same thought I normally would towards espousing the merits of Dr. Giggles. Movies and blogging have always been a reliable refuge for me but the grimness of the real world is occupying too much of my thoughts right now.

So, if posts are sparse around here - that's why. I just hope that the next time I say I don't have a lot of time to devote to blogging, it'll be because I'm swamped at work.
Posted by Jeff Allard at 9:56 AM

I just checked here yesterday and noticed things were getting sparse. Sorry to hear that you are still having trouble finding work, Jeff. Even if those two interviews didn't pan out, I would look at it as at least you had a few interviews and are still out there looking, which is better than if you had completely given up.

I can't imagine how frustrating it must be, but keeping your head in the job search game will pay-off at some point, and is much better than not looking at all. Good luck, Jeff, and I hope that something good happens for you soon.

Thanks Matt. Giving up isn't an option - I just wish there were more opportunities out there. And when an interview doesn't result in a job offer, even if the reason given is that they went with someone with more experience or whatever, it's hard not to feel that the burden of that failure is on you - that you didn't say the right things, ask the right questions, and so on. Anyhow - hopefully things will turn around soon. Thanks for the well-wishes!

I appreciate your situation. I've recently been laid off myself. While I appreciate some of the free time I've currently got (and I'm using it to catch up on backlogged projects) I'm not looking forward to being unemployed for any long term. Good luck in the job search!

First, hang in there. I remember feeling like crap for 7 months after being laid off, and thinking I'd never land another job during that time. Things worked out quite well eventually. But eventually is a long time to deal with. Easy to say, but try and stay focused, stay positive, and remember it's not YOU.

Second, shoot your resume around LOTT D, and hopefully we can pass it around even more.

I've been there, Jeff. I had to take a sabbatical from my blog last year for personal reasons. Unfortunately, some things take precedence over fun hobbies (good luck, by the way). A couple of things...

A) Dr. Giggles rules!
8) You didn't like Drive Angry? I'm surprised. I caught it last night and wrote a little blurb about it (I'd love to get your feedback on said blurb if you have time). Different strokes for different folks.

Chin up, Jeff. You're one of the good guys and there will be need for you in the new world order!

David, John, Dom, Arbo - thanks for the encouragement! It's always good to know that people are out there rooting for you!

It shows you just how dire the job market is in this country that one of the most brilliant minds I know is having trouble finding work! I've got my fingers crossed for ya Jeff and whoever ends up hiring you should count themselves very lucky!

Hang in there, Jeff. I think it's safe to say that we're all pulling for you.

I certainly understand your hiatus and just know that we'll all be here waiting for ya.

Thanks for the support, J.D. - I appreciate it!

I can't tell you how many times your job situation has crossed my thoughts, Jeff, and I also know how it can rob you of all the things you used to enjoy. I will tell you that a dear friend of 30 years with national standing in his field has been unemplyed for the last three years. This week the interviews paid off, and he spent yesterday apartment hunting in his new city. It can and does turn around in a fingersnap, and please know that there are people around the country - myself included - who wish you only the best, and are here to offer whatever help you might need. Stay strong!

Thanks Senski! I know things can change for the better in an instant - it's just hard to keep the faith sometimes. Thanks for the positive thoughts!

Good luck Jeff! Hopefully something will turn up soon! I'm just "partially unemployed" at the moment and not having much luck finding a second part-time job due to the set hours of my first part-time job. I was completely unemployed last summer, applied to 200 jobs, and that was even worse because I very nearly lost my apartment.

Best of luck to you, Jeff. Something is bound to come along soon (But keep clear of Burke and Hare Incorporated International, LLC - they seem to be a bit on the shady side).

There are only half-a-dozen horror-themed blogs I check on a regular basis, and this one is in the top tier. Hope you can keep posting, even if only occasionally.

Sarah, thanks - and good luck on finding a second job!

Radio, things won't be at a complete stop here for long - knock on wood. Once things get in order again, I'll be very glad to get back to focusing on all the trivial things I love!

Sorry to hear of the hard times. It's so frustrating to know that someone so talented can't catch a decent break in the job world. I'm sending my good vibes your way and not JUST because I miss your blog posts!

Thanks Emily - I'm sure those good vibes will help!

No good Jeff, but to some extent this post has had a major effect on me. My job is undergoing some tremendous difficulties, so I was very close to leaving a good paying position to look for something else or possibly relocate, but knowing that the market is still hurting may have helped me avoid hardship. I wish you the best man, but as twisted and cliche as it sounds, this is the best of all possible worlds, and fate is steering you into the right direction.

I like to think that's true, Carl. Hopefully things will turn around soon. And I'm glad my situation might have helped you to avoid any similar distress!

Jeff-- I can really relate to your thought of trying to avoid the feeling that the burden of failure is on you. I've been going through the same thing as I try to find a teaching job-- the most qualified applicants are the ones whose resumes don't get thrown away automatically, and in this job market a lot of qualified teachers (or substitute the name of any other profession) are out there looking for the same jobs I am.

Hard times are hard times, no matter how you cut it, but to paraphrase Kindertrauma, it's absurd that someone so smart would go without a job for so long. I have to believe that something will surprise you very soon. The blog can wait and it will.

Thanks Dennis. Doing this blog is so much a part of my routine and has occupied my daily thinking for so long that letting it go, even temporarily, is making me feel even more adrift.

But watching the news lately is a sobering reminder that there's far worse troubles to endure than looking for work. Thanks again for the encouragement, Dennis - and good luck on finding a teaching gig!

Sorry to hear about your situation, Jeff. I can relate as I was laid off from my job last year at an ad agency (after 5 years) because, in their words, "there isn't enough work to justify having two writers on staff." About three months later, they proceeded to fire half of the Creative department (including the other writer).

Best of luck in your search. In case I missed it, are you a writer by trade? If not, I could easily see you writing professionally based on what I've read here.

Whenever I get the chance to check out other people's blogs, you're always one of the first ones I hit. Stay strong, my man..things will turn around.

Thanks FF! It's been a long road but hopefully something will come along soon!