A Red Hot Night Of Hate 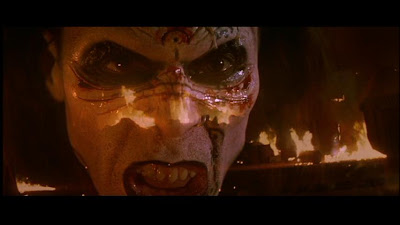 It's a weird irony that, since the '70s, as B-movie genres became upgraded to A-level event pictures, audiences have become increasingly disdainful and dismissive of actual B-movies. The advent of cable and home video has only helped develop that mindset as whereas once it was common for Hollywood product and their scrappier competition to go head to head in theaters (in the summer of '83, for example, Metalstorm: The Destruction of Jared-Syn could be playing next door to Return of the Jedi), nowadays anything that smacks too much of low-end cheese has to settle for a direct-to-DVD release or VOD or whatever. Horror fares a little better as low-budget horror has proven time and again that it can thrive in theaters but when it comes to sci-fi, with rare exception, the big screen is now reserved for the likes of Avatar or Transformers.

This divide, in which films are often segregated by their budgets, has fostered a false sense of sophistication in audiences where the line between good and bad is typically believed to be solely about production values. Years ago, audiences were more apt to see past budgetary limitations and recognize if there was a sense of craft at work. By the time a sci-fi picture like Screamers came out in 1995, though, the sight of an abandoned quarry doubling as an alien landscape wasn't going to cut it with viewers - especially not with a long past his Robocop days Peter Weller starring, surrounded by a cast of also-rans.

Granted, Screamers isn't a cruelly neglected classic - its limitations don't begin and end with its budget. But yet it was an endearingly pulpy B-movie (scripted by Dan O'Bannon) that showed a fan's affinity for the genre and I got a kick out of being able to see it on the big screen. Six years later, I felt the same way, only more so, about John Carpenter's Ghosts of Mars. 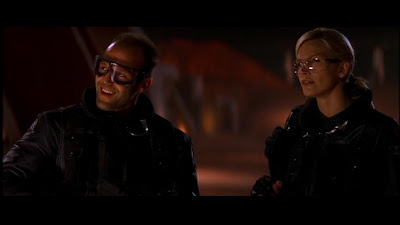 Set in the 22nd century, Ghosts of Mars takes place in the far-flung year of 2176 on a partially terraformed Mars as a team of police officers travel by train to a remote mining colony in order to bring murder suspect James "Desolation" Williams (Ice Cube) back to Chryse City to face charges. 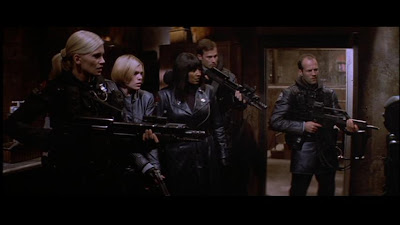 Under the direction of their commander, Helena Braddock (Pam Grier), Officer Melanie Ballard (Natasha Henstridge, in a role that originally was meant to be played by Courtney Love), Sergeant Nathan Jericho (Jason Statham), and rookies Bashira Kincaid (Clea DuVall) and Michael Descanso (Liam Waite) arrive in Shining Canyon only to discover that it's a ghost town. Even worse, a closer investigation reveals that many of its inhabitants have been slaughtered, their bodies decapitated and hung upside down.

The prime suspect in this massacre would be Williams, but he remains locked in his cell. 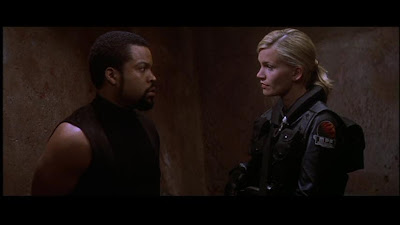 Before long, the officers discover just how angry the angry red planet is as they learn that the spirits of the beings that once inhabited Mars have been released from a tomb - an inadvertent blunder by an archaeologist named Whitlock (Joanna Cassidy, her character's name a likely tribute to legendary matte artist Albert Whitlock) - and these spirits have possessed most of the population of Shining Canyon, turning them into a barbaric tribal army dedicated to wiping out any aliens on Martian soil. 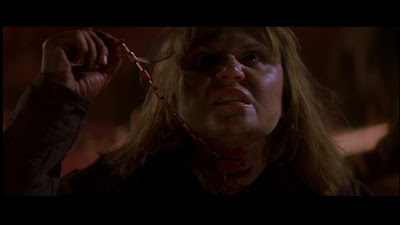 The spirits compel their hosts to mutilate themselves in a fashion that would make a Cenobite proud but this mangled mob needs a leader and the role of head cheese is reserved for a warrior that the film's credits refer to as Big Daddy Mars (Richard Cetrone). 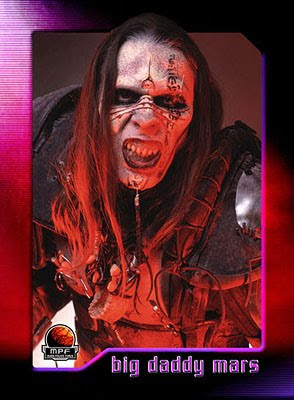 Big Daddy Mars, like the rest of his possessed posse, doesn't speak and instead puts all his energy into trying to slaughter any humans that he and his followers can find. 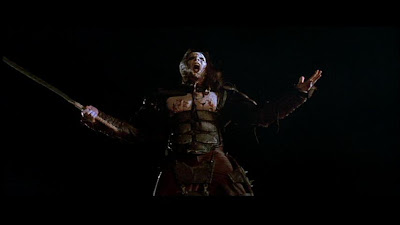 Finding themselves outnumbered by a couple of hundred, the police officers are forced to enlist the aid of Shining Canyon's prisoner population - including Williams - as deputies. If any of them are going to survive long enough to get back on the train to Chryse, every able-bodied human has to fight. The catch is that once a warrior is killed, the spirit possessing them will exit that body and search for a new host. 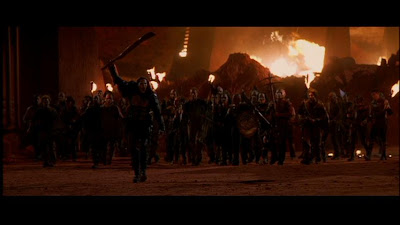 Against such insurmountable odds and enemies so ferocious, how can a rag-tag band of cops and criminals possibly survive the long Martian night? I don't know for a fact that nights on Mars are particularly long, by the way, I'm just sayin' it anyhow. 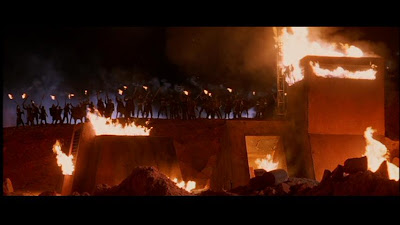 If this scenario of cops and criminals forced to fight side by side against an overwhelming enemy sounds familiar, it might be because it sounds so similar to Carpenter's 1976 classic, Assault on Precinct 13. On the whole, Ghosts of Mars plays like a greatest hits from Carpenter's filmography. Elements not just from Assault but also Halloween, The Fog, Escape from New York, The Thing (Grier at one point even shouts the phrase "Who goes there?" at a fleeting figure, perhaps as a wink to The Thing's source material, the John W. Campbell short story Who Goes There?), and Prince of Darkness can be found dotting the film's landscape. And besides the call backs to his own films, the influence of a Carpenter favorite, 1967's Nigel Kneale-scripted classic Five Million Years To Earth can be felt. 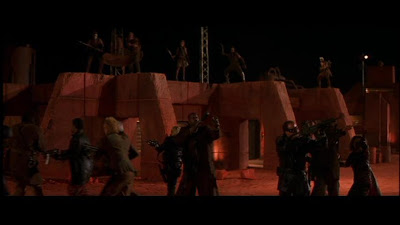 To some, Ghosts of Mars was a playful culmination of Carpenter's reoccurring themes - an instance of the aging master riffing on his own familiar motifs. For others, it was a lazy recycling of his earlier, better work. For general audiences, it was just a B-movie, better left ignored. 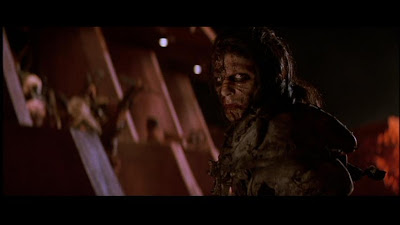 My feeling on the film resides in the first category. It's not perfect by any stretch but I really dig Ghosts of Mars and I'm glad it saw the light of day on the big screen. It was definitely a throwback, not just to Carpenter's older pictures, but to an older style of sci-fi filmmaking. Right off the bat, the movie had me on its side with its use of miniatures and models (and with its pulsing heavy metal score - featuring Carpenter himself along with Steve Vai, Buckethead and Anthrax). 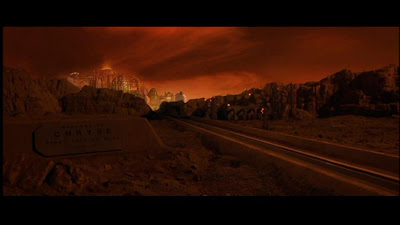 This was not a film that put all its eggs in with CGI. Most of the computer effects are reserved for the billowing red clouds of Martian dust (memories of the hassles of getting real fog to blow the way he needed it to on The Fog surely would've discouraged Carpenter from even thinking about using real red dust or mist on GOM) and the sudden decapitations several characters suffer as their Martian opponents hurl circular blades at them (with inhuman strength, clearly, as these blades don't simply lodge themselves in their victim's necks but slice clean through them). For the most part, though, this is a film about the future that is a fond reminder of the past. 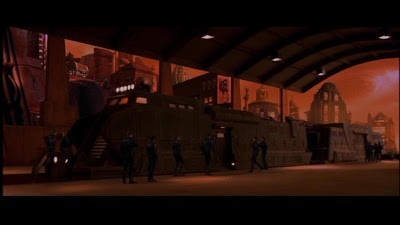 Derided by many as being insufferably corny, I think it's clear that Carpenter was out to embrace the pulp aspects of Ghosts of Mars, without regard for how well that would sit with modern audiences. The movie plays like a comic book with Carpenter employing the use of balloon and diagonal transitional wipes and Dutch angles. 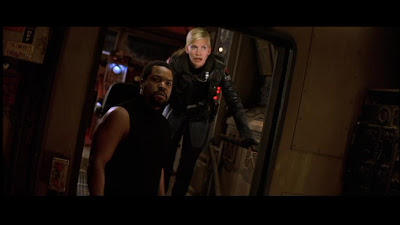 Carpenter and Larry Sulkis' screenplay incorporates scenes that Carpenter the Western buff must've always wanted to film, like a fight on a moving train as warriors try to board our heroes' transport. This is not supposed to be in the slick style of, say, Blade Runner or The Matrix. This isn't an example of future-noir. Instead it's a shoot-out at the sci-fi corral.

The film's dialogue - represented by lines like "I want you all jacked and ready and double-tough!" - is not supposed to be naturalistic. It's the kind of stylized dialogue that Carpenter had been using since Assault in which characters speak with a kind of poetic bravado and employ timeless phrases rather than current slang. As Carpenter said in the book Prince of Darkness, "Movies date very quickly. I try to pick lines that are enigmatic in specific but work in the long run."

Ghosts of Mars' entire cast plays it just right. When Ballard attempts to shame Williams for the criminal choices that he's made and he retorts by calling her a hypocrite, taking a dig at Mars' matriarchal society, with "You've just got the Woman behind your bullshit!" for me, that's right up there with any of my favorite Carpenter lines. 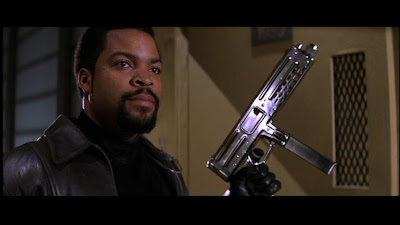 While at the time of its summer 2001 release, Ghosts of Mars was disparagingly associated with the two big budget Mars movies that had preceded it in 2000 (GOM was the Deep Star Six to Mission to Mars and Red Planet's The Abyss and Leviathan), it really belonged to a genre trend that was still on the horizon. In 2002, both Resident Evil and 28 Days Later kicked off a new era of popularity for zombies but Carpenter had already made the first zombie movie of the new millennium (just as 28 Days Later's rabid hordes were living people infected by a virus rather than truly members of the undead, Carpenter's possessed mob of "mindless motherfuckers" also deserves to be regarded as zombies). Most filmmakers to follow over the next few years did it slicker but Carpenter was there first.

Mocked for making a movie that was behind the times and out of touch, Carpenter proved once again to have his finger more firmly on the pulse of genre cinema than most.

And, given that the bulk of the decade to come would see the United States embroiled in controversial wars abroad, it's interesting to note that Carpenter made a movie that was an eerily prescient allegory about the perils of battling an indigenous population.

Ghosts of Mars doesn't rank with Carpenter's best but, like all his work, it stands up to a reevaluation. Blockbusters come and go but well made B-movies, like the kind Carpenter excels at, always find a more devoted audience in the end. 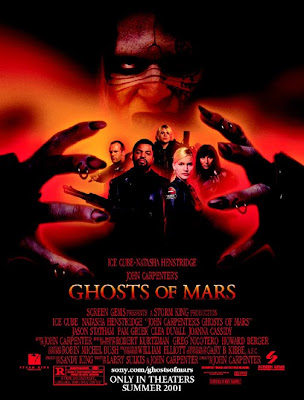 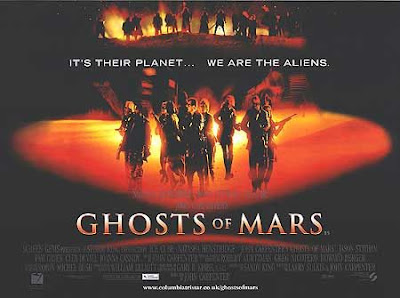 I dunno. There are some good ideas, here but the film just doesn't work as well as it should. As you point out, at times, it feels like greatest hits collection from Carpenter and he has even said himself that he was feeling incredibly burnt out by the time he made this film and it shows. But I do still find it watchable and usually end up sitting through it if I happen across it on TV.

What a fantastic reflection on one of my favorite genre films...

J.D., I agree that GOM is second-tier Carpenter at best. Whether it's attributable to age or studio politics or whatever, he just wasn't as on his game as he was in his best work. That said, it's still got that unmistakable Carpenter vibe to it and it's a movie that finds its way into my DVD player often.

Chris, thanks - I'm glad you liked the post! Great Carpenter retrospective in Fango #303, by the way. It's putting me on a real Carpenter kick!

I saw this in the theater and thought at the time, it was the worst I'd ever seen in a theater (until Fear Dot Com). It seemed cheap and rushed. It left me worried that Carpenter had lost his mojo. Maybe I'll give it another try with 10 years gone by.

By the way. "The Funhouse" special edition is coming. I never thought I'd see the day.
http://forum.blu-ray.com/united-kingdom/171464-funhouse-arrow-video.html

That's good news about The Funhouse - yet another example of how yesterday's disappointments turn out to be tomorrow's cult classics. Critics have their say when movies are released but it's the filmmakers who ultimately get the last laugh - although I bet filmmakers like Hooper and Carpenter would like to not have to wait ten, twenty years for their movies to be fully appreciated!