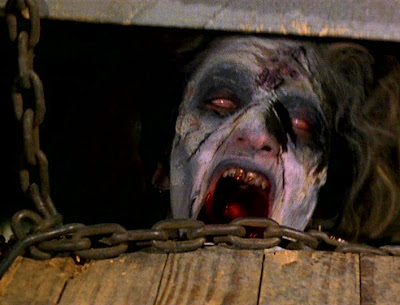 After many, many years of keeping their rabid fan base guessing about whether an Evil Dead 4 or an Evil Dead remake (or both, or neither) would ever arrive, Sam Raimi, Rob Tapert and Bruce Campbell announced this week that a remake is in production. This isn't good news for those who had their hearts set on seeing Raimi inflict some punishment on Campbell once again but I, for one, feel relieved.

The idea of Campbell reprising his signature role in another Evil Dead film strikes me as a depressing prospect, one best avoided. Career-wise, Campbell doesn't need to play Ash again - he's part of a successful show as a cast member of USA's Burn Notice in addition to doing voice work for animated films like Cloudy with a Chance of Meatballs and Cars 2. At this point it'd be a mistake for him to strap on the chainsaw again. I'm sure that some fans will keep clamoring for a sequel for as long as horror conventions are held but I'm hoping that ship has permanently sailed.

As for the remake, this is definitely a case where age, experience, and added resources could lead to an improved film. As a shining example of DIY resourcefulness, the original remains admirable but as a movie it isn't so thrilling anymore. Raimi already left it in the dust with Evil Dead 2 but that was, by design, a jollier, jokier take on the material. A new Evil Dead that's hellbent on scaring audiences rather than mixing gore and guffaws is something I want to see.

Writer/director Fede Alvarez is an untested commodity but I have faith that Raimi, Tapert, and Campbell have entrusted their film to the right guy. And the idea of Diablo Cody contributing to the script sounds fine to me. If nothing else, it's funny to think of an Oscar winning screenwriter penning an Evil Dead movie. I actually liked Cody's uneven but interesting Jennifer's Body so I do believe she has some credentials as a horror buff.

Once the classic - and even not-so-classic - horror films of the '70s and '80s began to be remade, it wasn't a question of whether The Evil Dead would be remade but when. But unlike the botch jobs that films like Halloween or A Nightmare on Elm Street endured, I think that the new Evil Dead has a better-than-average chance of actually surpassing the original. I'm mostly with you on Campbell and not needing to reprise the role. However, if done right, it could be very interesting and entertaining seeing an aging Ash be forced to deal with the soul swallowing forces of the Evil Dead. Something about that idea strikes me as funny.

I'm cool with a remake, though, I am not so hot on Cody, whose dialogue is incredibly hit or miss, and when it's a miss, it's in the most forced sort of ways. Still, I don't think she'll have much bearing on the final product anyways.

My question is who plays Ash now? I loved the idea of the Sean William Scott rumor as I think his is one of the funniest comedic actors working, but like you, I would like to see a serious version of the film, and he might not be the right fit in that situation.

I read that there will be no Ash in the film, that Raimi and co. believe that Campbell owns the role and that they wouldn't recast it. If true, I think that's a good way to go. Having someone step directly into Campbell's shoes doesn't sound like a winning idea to me. I hope that they just dispense with the notion of a wise-cracking lead altogether.

As for an aging Ash still battling Deadites, I agree that there's some good possibilities there but comic books have been continuing the story of Ash for awhile and that seems to be a good way to keep that end of the franchise alive without Campbell having to continue the role on film.

Not to mention the video game sequels some of which Campbell has voiced himself, which were entertaining in their own right. Yeah, I think a remake is probably the right way to go and so far it seems like Raimi and co. are going about things in the right way, hopefully staying away from the WB casting stable that the Platinum Dunes remakes continually draw from.

It should be interesting to see who is finally cast in this film.

I'm hoping they go with pretty much all unknowns across the board. This is a movie that doesn't need star power. If anything, having recognizable actors would work against it.

Thanks for the update. I think they could do a good update to the franchise if done correctly. I always think Campbell should have been a star but never got the chance, but yes he is too old now to play a star of this. I could see him having a cameo and get killed off (but as someone else). Good blog, I look forward to visiting more often.

Thanks Mummbles - glad to have you stop by! As for Campbell, for years he kept getting close to a big break but nothing ever quite clicked. But on the upside, he's found a great niche for himself as a character actor and his gig on Burn Notice has been a long running one with no immediate end in sight.