The Upside To "Inside" 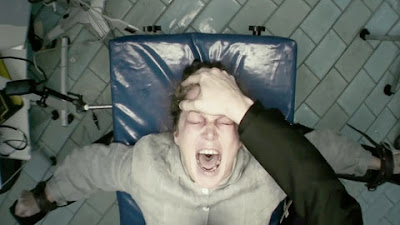 By the time its first showings had ended last week, The Devil Inside was already infamous thanks to an abrupt ending that had audiences booing the screen. And yet this low budget shocker cleaned up at the box office on its opening weekend to the tune of almost $35 million.

Will it fall sharply going into its second weekend? Sure. Horror pictures are typically front loaded anyway but even if it vanished from theaters today, the movie would still be a huge success. Some fans might (understandably) grouse about how unjust it is that The Devil Inside is a box office blockbuster while so many better horror movies often go ignored during their theatrical runs (or don't even get theatrical runs). Personally, I celebrate any genre film's success.

Obviously I prefer to see good movies do well but even when a mediocre-to-poor horror movie is a hit, I see it as an overall victory for the genre.

There's been a lot of gloomy talk lately about theater attendance, with 2011 having the lowest turnout to theaters since the mid-'90s. Some commentators have looked at those figures and wondered whether Americans have fallen out of love with going to the movies but the massive turnout for The Devil Inside is an encouraging reminder that audiences will still pack their local theaters if they're genuinely excited about a movie. Of course, it'd be better if most of the audience didn't leave feeling like they've been ripped off but whenever studios are reminded (for the umpteenth time) that horror is a hot commodity, it gives other, hopefully better, filmmakers a chance to make the kind of horror movie that really deserves to be a hit.
Posted by Jeff Allard at 7:39 AM

Email ThisBlogThis!Share to TwitterShare to FacebookShare to Pinterest
Labels: The Devil Inside

I'm not entirely certain, but I'd say 2011 suffered more from either status qou horror, some excellent stuff, and a noticeable dirth of it at appropriate times (like October). This year may indicate otherwise, but I'm sure theater-going will be fine and horror, should we actually get decent movies, will percolate.

I don't agree, though, that a so-so horror movie, even if it does do well initially, is a good thing for the genre. Look at it this way; the Devil Inside had a large upfront audience, cut will they come back after getting dissed like that? I doubt it. That doesn't bode well for the next horror movie that's remotely similar.

You do wonder if an audience that's been burned by a horror movie will be more reluctant to take a chance on another one but if that was the case, horror would've died off a long time ago. I think it'd be hard to convince a lot of people to check out The Devil Inside 2 but not another horror film. I'll be interested to see how The Woman in Black does. The action/horror of Underworld 4 and the survivalist suspense of The Grey aside, The Woman in Black is the next straight-up horror film coming to theaters. You'd think with a strong ad campaign, Daniel Radcliffe in the lead, and a teen-friendly PG-13 rating that it could at least match The Devil Inside's opening, if not pass it but we'll see.

See, that just proves my theory that it really doesn't matter if the movie is good or not. Even with word of mouth, people will go see movies even though they know it's going to be a piece of crap. People just don't care anymore.

I disagree. I think most of the people who went to The Devil Inside went with the hopes that it would live up to its effective trailers and TV spots. That fact that it didn't and word of mouth sent its attendance plummeting shows that people do care and that while the best marketing in the world can get people in the door it won't buy good word of mouth. Look at Insidious, a movie that opened to modest box office, never made it to #1, but yet held on steadily for weeks due to positive feedback.

It's always a tricky subject, because I think 2011 proved (to me) that infinitely better genre films hit DVD without ever passing through a theater. And having been to my share of noisy cell phone ringing theaters, I'm fine with that because I don't really like ponying up big bucks to sit in a room filled with talkative non-movie fans. But then I think back to the theater experience seeing Insidious, where all that chatter--cut with jumps and sudden silence--actually helped the film.