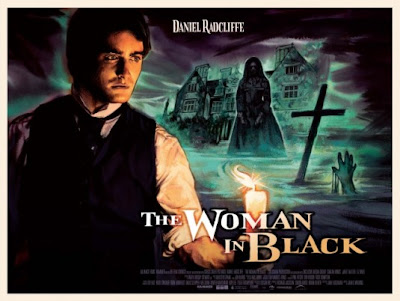 It's ironic that the new Hammer Studios production The Woman In Black is being hailed by most as a return to classic Hammer horror. Not because it isn't a fine film but because its ghostly narrative resembles nothing in the classic Hammer catalog. Hammer was always about very physical threats. When you think Hammer you think of Christopher Lee's face dripping blood as Dracula, or his ravaged visage as Frankenstein's Monster, or him violently smashing his way through the French doors of Peter Cushing's study as The Mummy. Hammer wasn't about intangible, spectral chills, it was about Dracula spectacularly disintegrating to dust in the sunlight.

But because The Woman In Black is an old timey period piece, that's enough to make it classic Hammer in the minds of many. Whether it really fits the Hammer mold or not, it seems like today's Hammer has finally found the movie to put them back on the map after their remake of Let The Right One In landed with a disappointing thud in 2010 (even though that grisly vampire tale had more in common with classic Hammer than The Woman In Black does).

An adaptation of a 1983 novel by Susan Hill (which I haven't read) which has been previously adapted into both a long running play and a 1989 BBC TV movie (neither of which I've seen), The Woman In Black is a studious attempt at creating a classic English ghost story. Not being able to compare it to its predecessors, I can't say how well it works as an adaptation but as a newcomer to the material I thought it was great, spooky fun.

With all the terrible tragedy that the story encompasses, "fun" might not be the best word for it but for anyone looking for an eerie tale well told, The Woman In Black fits the bill nicely. Director James Watkins (who previously directed the grim Eden Lake) and screenwriter Jane Goldman (Kick-Ass, X-Men: First Class) clearly have an affection for genre fare and they make The Woman In Black into a sure-footed yarn. It doesn't deliver anything cutting edge but it has the instant vibe of a comfort food sort of film as well as one that's ideal for younger viewers just starting to explore the genre.

Watkins goes for more than his share of jump scares but I think that's fine for a movie like this that's looking to elicit a few fun shrieks. A lot of fans look down on jump scares but I enjoy them as a genre staple and Watkins pulls off a few very effective ones here.

I had read that Daniel Radcliffe comes off as too young to play a widower with a young son but his performance as solicitor Arthur Kipps didn't strike me as being off at all. Yes, he looks young but not to the point of distraction. I've also read some complaints that the ending is a little too treacly or sentimental but I found it satisfying.

At heart it maintains the story's grim tone while at the same time providing the kind of "up" moment that only a supernatural film can allow. For me, it worked (apparently every prior version of WIB - the novel, the play, and the TV movie - have sported different endings). Without spoiling anything I will say that given what transpires, I find it funny that anyone would claim that it was too cheery!

That said, I did leave the theater with a smile on my face. I took my six year old son to see it as his first horror movie in the theaters and it turned out to be a perfect choice (although I will say it wouldn't be perfect for every six year old - parents approach with caution). The Paranormal Activity films have shown that there's a big audience looking for supernatural scares but The Woman In Black proves that these scares don't have to be of the "found footage" variety - that there's still room for traditional storytelling and old fashioned craftsmanship. It might not quite be the kind of Hammer film that the studio originally made its name on but it still manages to feel like the return of an old favorite.
Posted by Jeff Allard at 7:52 AM

Looking forward to watching it. Also, that poster is better than the one that I've been seeing.

I haven't been to see this yet but I watched the TV version on Youtube a few nights ago and was quite pleased.
It's cheering that I've been invited by no less than three people (none of them usually drawn to horror films) to go see it. If it weren't for some family stuff eating up my time I'd have been there.
I'd love to hope that WIB is a big success and, along with the PA movies, gives us a surge in this flavor of spookiness for a while.

I enjoyed this movie more than most horror films today. It started off as only having the quick-scare moments, but I really liked that there was more tension and suspense as the movie goes on. As for Radcliffe being too young, I would agree if the movie took place today, but it works just fine for a movie in the early 1900's. For me, this was one of those movies that comes around every once in a while and proves that quality horror films (those that don't need partying teenagers and tons of profanity) DO still exist. Not to say that I don't like the occasional crappy-fun movie though lol

Pretty much agreed with everything you said! Liked the atmosphere, bought Radcliffe, and found the ending pitch-perfect. I hope it does well.

Now that I've been to see it...
I liked it a lot... though not the audience I saw it with (I suspect I've grown too accustomed to watching horror alone at home).
I hated the 'happy ending' for about 24 hours... until I settled down and realized they had provided a good bit of foreshadowing for it.
Not nearly as bad as similar angelic rescues at the end of most of the Dark Castle stuff or that vile remake of The Haunting.

Aidan, sm_hayes, Emily, Knob - thanks for the feedback and comments! And Knob, thanks for stopping back with your two cents on the movie! As I said in my original post, I thought the ending struck a satisfying balance between being both grim and uplifting.

I just saw it yesterday was pleasantly surprised. I really though it was a well done haunted house film nd somewhat reminded me of the haunted mansion ride at Disneyland.

Cool - glad to hear you liked it!