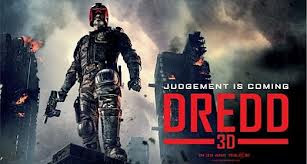 Back in my days of working at video stores, it would be common for a customer to come in asking for something "good," as if that were a simple request to fill - oblivious to the fact that when it comes to movies (or any kind of entertainment, really), everyone has a different definition of "good." Case in point: Dredd. Or, Dredd 3-D.

I absolutely loved the shit out of this movie but I'm guessing it doesn't hold a lot of broad appeal. It's the second try at adapating a cult comic book whose greatest audience lies in its home base of the UK and it stars the talented but not terribly well-known Karl Urban (Bones, in the Star Trek reboot) who, for the entirety of the movie, wears a helmet that hides all but his mouth. Oh, and it's violent - just a full-on bloodbath.

So, for general audiences, this may not pass for "good" but for the cult crowd - the comic book freaks, the action junkies, the sci-fi nerds - this is practically tailor made. As many have noted, there's great similarities between Dredd's plot and that of the Indonesian fave The Raid from earlier this year but it's a total coincidence and as close as their plots are (both involve police having to make their way to the upper floors of an apartment tower, through a gauntlet of thugs), neither feels like a weaker copy of the other.

With The Raid, the focus was on elaborate hand-to-hand combat while Dredd is more about non-stop shoot outs. Dredd is a member of a futuristic police force called the Judges and his weapon is a voice-activated gun equippped with multiple functions. Dredd's partner is a rookie named Anderson (Olivia Thirlby), who he's assigned to assess. Anderson's scores techinically would've kept her out of consideration for being a judge but as she has the rare advantage of being a psychic, those scores will be overlooked pending Dredd's decision.

On their first day together, Dredd and Anderson respond to a call from the 200-story Peach Trees apartment complex and before long, the simple arrest of a suspected gang member leads the drug lord known as Ma-Ma (Lena Headey) - the unofficial overlord of Peach Trees - to put the entire building under lock down and call for the assassination of the judges. It's up to Dredd and his inexperienced partner to survive and bring Ma-Ma to justice. Or better yet, bring justice to Ma-Ma.

The screenplay by Alex Garland (28 Days Later), is simple but in a very smart, efficient way. I forget exactly what the big scheme of the villian was in the Stallone version of Dredd but I seem to remember it was something grandiose - something that would've changed life in Mega-City forever had it succeeded. In contrast, what plays out in Dredd is just a day in the life. You get the feeling that whatever call Dredd and Anderson would've answered to, it would've been just as brutal as their trip to Peach Trees. You also sense that this is not an unusual day for Dredd. With all that's going on, he never loses sight of the fact that this is supposed to be Anderson's test as a judge. When the shit hits the fan, he doesn't simply take over but frequently asks Anderson to make the call on what their next move should be. He keeps his cool under fire and expects Anderson to as well.

Director Pete Travis is mostly known from British TV and while there's been rumors that Garland took over the editing of Dredd from Travis, the movie doesn't betray any signs of a troubled production. It comes across as a tightly concieved piece of work. Based on its US box office, I'm guessing we shouldn't expect a sequel any time soon - at least not one that'll reach theater screens in this country. But that's ok. Dredd isn't for everybody. I do wish it had done bigger business but then again, with so many nerdy properties becoming huge these days, it's kind of comforting to see something that's best appreciated by the true geeks of this world.

I think Stallones Dredd movie was about the bad guy creating an army of clones to take over Mega City or something...but this new Dredd looks awesome, I'm dying to check it out come next Thursday! Glad you enjoyed it, and if the rest of the world has forgotten how cool cinematic violence is, well, thats their loss. I love for those Veehoeven days!

Yeah, Dredd doesn't have quite the subversive touch of Verhoven but I think it's appropriate to the material that it's played more straight-faced.

Nice. Was waiting for your opinion on this. I thought it was killer.

Cool! Glad you liked it too.

Excellent review! I'm really stoked to see this one. Everything you've said about it is exactly what I had hoped it would be.

I think it's a safe bet to say Dredd will meet your expectations, J.D.!

This is one of those films that my movie fan friends can't stop raving about, but it seems critics and audiences could care less. Considering how much I ended up loving the Conan reboot, I should start to trust Karl Urban this time of year more.

I really dug the Conan reboot, too - but Dredd is even better!