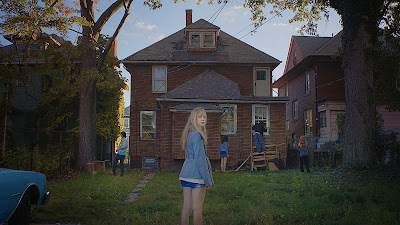 If David Lynch had directed Halloween, the result might look something like It Follows, the dreamy, unnerving sophomore feature from writer/director David Robert Mitchell (2010's The Myth of the American Sleepover). Set in a Detroit suburb, It Follows tracks the plight of Jay (Maika Monroe), a pretty teenage blonde whose new boyfriend (Jake Weary) has made her the target of a deadly, inexplicable specter of which little is known except that...it follows.

Making explicit the cautionary themes of the '70s and '80s slasher boom wherein kids were advised of the perils of getting it on, the titular stalker of It Follows is put the the trail of new prey through sex (which marks this as a ghostly cousin to David Cronenberg's 1975 shocker, They Came From Within). Jay's new boyfriend is trying to shake "it" thanks to a previous sexual encounter and he sleeps with Jay in a deliberate bid to give the ghoul someone new to pursue.

What this ghoul is or what its weaknesses (if any) may be is knowledge that the kids in It Follows don't have access to. It's normally a given in horror films that whenever a monster or any supernatural force is introduced, an expert will eventually come along who knows what it is and all the rules that come with it. Or else there's at least someone around who's smart enough to put all the pieces together. But It Follows has none of that. There's no sage mystics, no experienced hunters, not even any helpful Google searches. There isn't even an attempt to bring in the cops or any parental figure. It's a refreshing break from convention and the fact that these kids don't always make the best decisions (including a climatic attempt to dispatch the ghoul that seems both logical and entirely daffy) can simply be attributed to the character's youth.

I also found them to be likable, something I'm rarely able to say about modern horror films. But as with the young cast of last year's Ouija, the kids in It Follows show a genuine interest and concern for each other and I hope this'll prove to be the new norm in genre films.

For years, it's been a given that if there's a horror movie with a teen cast, there always has to be at least one major jerk among them (usually more) but that's not the case with It Follows. Some bad behavior does occur but no one's actions ever seems born out of everyday mean-spiritedness and, for me, that goes a long way.

While Mitchell works very well within the scope of his low budget (the film is wonderfully photographed by Mike Gioulakis), occasionally his ambitions exceeds his means - as with a lake side skirmish between the kids and the invisible entity that can't help but look ridiculous. But yet I found that the film's chintzy, low-tech moments only added to its charm. There's so much slickness in films today that it's endearing to me to see a movie that isn't afraid to wear its limited resources on its sleeve and go the extra mile at the same time. The Paranormal Activity films are also low-budget affairs, of course, but I think that they've always been a little cautious when it comes to doing more than their budget would allow.

Here, there are some attempts to extend past what the budget can convincingly deliver. That it doesn't always work seems forgivable in the spirit of showmanship.

I'm also willing to cut It Follows a pass for whatever faults it may possess simply out of gratitude for bringing a much-missed sense of melancholy back to horror. That's a quality that used to be common to the genre but which steadily evaporated once the '70s gave way to the good times of the '80s and a party atmosphere began to prevail.

In the manner of '70s horror, It Follows exudes a quiet sorrow, observing its teen protagonists as they drift aimlessly through their directionless lives (the only characters we see holding down jobs are stuck at a rinky-dink ice cream shop and there's never any talk of ambitions or plans for the future) all while they're trailed by a death-dealing entity that they can neither understand nor fully anticipate. They only know that it's out there and getting closer all the time.

While these kids may lack the vocabulary to be able to articulate or explicitly acknowledge their existential dread, the words of T.S. Eliot and Dostoyevsky are up to the challenge and are woven into the film in a way that feels organic (a portion of Eliot's "The Love Song of J.Alfred Prufrock" is heard in a classroom scene that purposely echoes a similar scene in Halloween) and never forced and pretentious.

With Mitchell showing an intuitive understanding of the genre that stretches well beyond just knowing the simple mechanics of springing a scare, his film not only honors the classics that came before it, it also sets a high standard of its own for other filmmakers to follow. 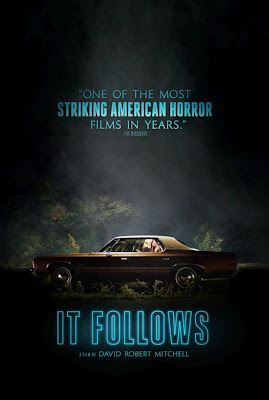