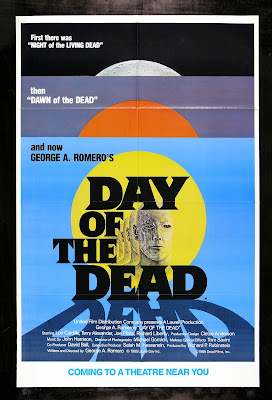 My previous Retro-Shock Theater post - for The City of the Dead - marked the final RST column that appeared on Shock Till You Drop. Going through my old files, however, I've come across a couple of RST columns that were completed but, for whatever reason, never ran.

This one, for Day of the Dead, would've coincided with the release of the teen zombie romantic comedy Warm Bodies (I bet you totally forgot that movie even existed - I know I did!) on February 1st, 2013 but I guess the clock ran out and I thought I'd be better off getting a My Bloody Valentine write-up ready to go instead. Seems plausible.

Anyhow, here's some Day of the Dead love for ya!

Some hardcore horror fans might balk at the idea of a romantically inclined zombie as portrayed in Warm Bodies because zombies just aren’t meant to be cuddly, damn it! But while the undead character of “R” might be more photogenic and more palatable as a love interest than the average flesh eater, the idea of a “good” zombie was validated and approved by the godfather of the modern zombie movie himself, George A. Romero, in 1985’s Day of the Dead.

He might not have qualified as choice dating material but the lead zombie of Day of the Dead, dubbed “Bub” (Howard Sherman) by scientist/father figure Dr. Logan (Richard Liberty), was certainly endearing and was instantly embraced by horror fans as the first "lovable" zombie.

Romero had already planted the seeds for Bub in Dawn of the Dead (1978) by showing a growing empathy for his shambling undead hordes. When Fran (Gaylen Ross) kindly frees a zombie nun whose habit is trapped in a door, there’s an acknowledgement of the creature's buried humanity. And at the climax of the film, one zombie is fascinated by a rifle and trades it for Peter’s rifle, showing a dim thought process existing beyond that primal appetite for flesh.

But even though Romero allowed his zombies to be more than just slow-moving targets to be picked off in Dawn, it was still a big creative leap from their depiction in that film to having Bub command so much audience sympathy in Day. The film itself is the most abrasive of Romero’s original Dead trilogy but the character of Bub himself is undeniably soulful. Tom Savini’s make-up for actor Howard Sherman ranks among his best work, looking appropriately grisly while allowing Sherman to express a full range of emotion.

Compare the make-up on Sherman to the look of “Big Daddy”, the lead zombie Eugene Clark played in Land of the Dead (2005). Big Daddy was a character clearly created in the mold of Bub but that never achieved the same emotional connection with audiences, and I think that was in large part to the stiff, heavy make-up burying the actor's face. He simply looked too monstrous, his expression frozen in a permanent snarl, while Sherman as Bub was able to convey gentleness in the best tradition of Frankenstein’s Monster.

Even though the zombies currently seen in TV's The Walking Dead and Warm Bodies might be made with more state-of-the-art technical prowess, they haven’t surpassed the work that Tom Savini and his crew did in Day. Less than ten years on from the simple blue faced zombies of Dawn, Savini was able to use the advances in prosthetic makeup that took place in the short interim between Dawn and Day to create the greatest array of zombies ever.

Bub is arguably the most sympathetic figure in Day of the Dead, his only true competition for that spot being John, the laid back helicopter pilot played with a thick Jamaican accent by Terry Alexander. Who else is there? You've got the deranged Logan, the strong-willed and strident – often to her detriment – Sarah (Lori Cardille), her emotionally fragile boyfriend Miguel (Anthony Dileo Jr), good hearted but perennially sauced Bill (Jarlath Conroy), and then the perpetually enraged Captain Rhodes (Joe Pilato) and his crew of murderous assholes – this is a seriously flawed group of individuals. Even the good guys in Day are not so easy to warm up to.

One of the biggest criticisms of Day upon its original release – and, really, to this day – is that the characters are just too unlikeable, that they’re all pitched at such a high level of antagonism that they’re not endearing in the way that Peter, Roger, Fran, and Steven were in Dawn of the Dead. Worse than that, there's the accusation is that many of them are simply not believable as people. Because, really, who acts like this? But I would say Day shows Romero working even more ahead of the social curve than usual. The bitter bickering that goes on in Day, ultimately escalating to the point of homicidal rage, may have seemed outrageous in 1985 but it seems very much in tune with our world today.

We now live in an age more bitterly divided than at any time most people can recall. We are more ideologically separated than ever and the tone of public discourse on pretty much everything seems to have deteriorated to the point of insanity.

When the father of a slain child in the Newtown shooting is angrily berated at in a public meeting by gun advocates, you have to wonder where basic civility and decency has gone. It’s like the entire country has become its own version of the underground caverns of Day of the Dead – we’re all trapped with each other and the animosity and hate is rising by the day.

Day might not have spoken to the mood of the ‘80s so much but it speaks to today’s world with an uncanny accuracy. Captain Rhodes might’ve once seemed shrill to the point of cartoonishness but his coarse, seething demeanor is right in line with that of many modern pundits.

And yet, there’s also the argument that Rhodes has his points. His rage is not completely unfounded. After all, his slain men have been fed to Bub - a despicable move on Logan's part. His psychopathic anger is, to some extent, justified. Why wouldn’t he want payback against anyone who'd show so little regard for the value of his men's lives that they'd callously use them as servings of zombie chow?

Rhodes may be unhinged but Logan is just as nuts in his own way and it’s the stubborn, intractable separation of camps and the unbending need for one tribe to win over the other that ultimately makes life together unlivable. As John says to a frustrated Sarah: “…That’s the trouble with the world…people got different ideas concerning what they want out of life.” Day of the Dead is almost thirty years old but it’s more a movie of the current day than anything in theaters now.