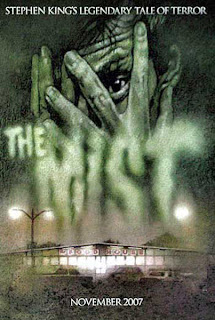 With hindsight, fans can look at the box office failure of a classic like John Carpenter's The Thing and shake their collective heads over how such a great movie was left out to dry. But while the hope would be that were such a movie to be released today a more alert generation of horror fans would give it the reception it deserves, to look at the so-so box office take of Frank Darabont's superlative The Mist is to see that horror fans are either just as unmotivated as ever or else they're just too small a group to make a real difference at the box office.

If fans feel that the genre is being undermined by the success of remakes and sequels and PG-13 horror movies, why are those films continuing to thrive yet a picture like The Mist gets a shoulder shrug? I just don't get it. Horror fans love to bitch about how Hollywood caters to the mainstream but if fans take a wait-until-DVD attitude whenever something promising comes along they shouldn't be shocked if the kind of horror films they're looking for aren't around.

Thanks to the internet, it's easier than it's ever been to market to the horror community. And with months of advance hype preceding their releases, it's not as though films like The Mist or Grindhouse flew in below the radar. So either horror fans are just that apathetic or we're just that small of a community. Personally, my gut says it's more a case of the later.

Even though the fan press likes to foster the idea that horror fans are just waiting to be mobilized in service of the right film, I don't think we have the numbers to make a movie into a hit on our own.

We can bring as much grassroots support as possible (Hatchet writer/director Adam Green recently invited fans to "join the Hatchet Army") but ultimately, the future of horror is for mainstream audiences to decide. As much as we may resent it, fans are just along for the ride.
Posted by Jeff Allard at 5:25 AM

Email ThisBlogThis!Share to TwitterShare to FacebookShare to Pinterest
Labels: The Mist

In the case of THE MIST, I think that part of it is poor scheduling on Dimension's part - witness the scheduling of GRINDHOUSE as the big Easter film - and it didn't help THE MIST to come out in the midst of family films on the eve of Thanksgiving... but then, THE THING had the summer of E.T. to contend with.

I think that it just goes to shore up William Goldman's saying on Hollywood: "Nobody Knows ANYTHING".
Would THE MIST have done better if it were released Sept./Oct. to take advantage of the Halloween season? Maybe. Would a better ad campaign have helped? Maybe.

Increasingly, I think that theatrical performance is going to mean jack shit in terms of the quality of the film. I have the feeling that THE MIST is going to find its audience when it hits DVD, like THE THING ultimately found its audience via home video and cable... I don't think that it's mere coincidence that it's referenced at the beginning of the movie - perhaps Darabont had a feeling early on about the reception of the film in today's horror film climate.

As far as mainstream horror goes, I think the audience is just too fragmented to really get behind a picture... notwithstanding the SAW and HOSTILE franchises, which I really don't consider to be horror pictures at all. If there's going to be any success, I think that DVD and downloads are going to be it - witness the bare theatrical release that Larry Fessenden's THE LAST WINTER got this fall - that's another film that people will discover when the R1 DVD becomes available (if they haven't discovered it via torrents already).

I agree that opening The Mist on Thanksgiving weekend didn't do it any favors. I also agree that the ad campaign wasn't so hot, either.

While I thought the teasers and trailers were great, I think they only worked for fans who were already pre-sold on the movie from Day One. Every co-worker or family member I talked to prior to The Mist's opening - people who aren't hardcore genre fans - had little-to-no interest in seeing The Mist. The common complaint being "isn't that just like The Fog?". The second complaint being "uh, isn't that just a movie about giant mosquitos?".

So either The Weinstein Co. didn't do a good job of getting the word out on what The Mist was about or people just like to put every movie about inclement weather in the same basket.