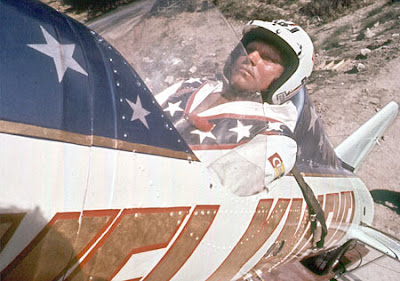 For a younger generation raised on the injury-risking antics of Jackass and its sophomoric ilk, the famously death-defying acts committed by daredevil extraordinaire Evel Knievel during his '70s heyday may seem like nothing more than the same brand of foolhardiness practiced by Johnny Knoxville and crew.
But Evel wasn't some punk with nothing better to do than tascer his own nuts. No, Evel was a real-life superhero. His larger than life stunts were awe-inspiring, even when they went wrong - sometimes especially when they went wrong. To be honest, I don't remember ever seeing an Evel jump where he didn't land at horrible expense to his body. It's astonishing the amount of abuse that his body was able to recover from time and again.
For most people, being hit just once in the groin by a motorcycle would be enough to call it a day but Evel took those same kind of licks over and over during his career. And only someone who had the unquestionable guts that Evel did could ever make a red white and blue jumpsuit seem bad-ass.
While our current celebrity culture is epitomized by selfish and weak-willed behavior, Evel endures as an icon of an era that was still able to produce real-life giants. Today, anyone with a video camera and something to fall off of can get themselves noticed on You Tube but Evel performed the sort of deeds that create a legend.
As he said in an interview in 2005: "Follow your dreams, no matter what they are or you'll never amount to anything. It's better to take a chance in life than to never take a chance. I'm not saying to go and jump a canyon, but you have to take chances. Next time, I'll take more."
Evel Knievel, dead at 69. R.I.P.
Posted by Jeff Allard at 5:31 PM