What All The Cool Kids Are Up To 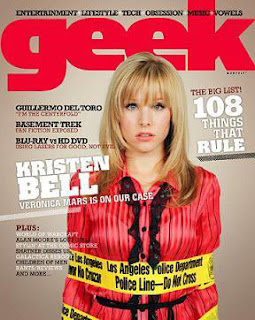 I don't know when it happened but somewhere along the way, it became cool to be a geek. Liking comic books, horror movies, and science fiction doesn't automatically put you in the loser's club anymore. On the contrary, to have any hope of understanding popular culture today you have to be something of a nerd (look at the big holiday movies, for example - who else but a sci-fi horror buff would have the inside track on I Am Legend or The Mist?). More than ever, it's become a geek's world. But somehow I can't help but think that the glamorization of geeks is ultimately a bad thing. I mean, some of us just weren't born to be cool.
Picking up my first issue of Geek Monthly recently has only acerbated my sense of dismay over the new face of nerddom. After skimming through its glossy pages, I fear I just don't quite belong to whatever group this is representing. Based on the interviews with Sam Raimi and Frank Darabont and the reviews of such things as the final cut of Blade Runner, I guess we share some of the same interests but Geek Monthly is aimed towards a new breed of geek who possesses a level of polish and style (and a disposable income) that's alien to me. It's as though the term 'geek' has been stolen from the genuine article.
I mean, I'm not exactly a slob. And I'm not socially inept, either. But looking through Geek Monthly made me think I must've been given bad instructions along the way because clearly geeks are living larger than ever. Growing up as a geek, I at least felt some comfort in the fact that there was some collective nerd pride found in not fitting in - a romantic quality to it, even.
Well, so much for all that.
It's hard not to think of myself as a geek but I guess I'll have to get used to it. It's either that or learn how to be much more popular. And as I always told myself during my most awkward times, that'll happen someday - in my dreams.
Posted by Jeff Allard at 5:14 AM