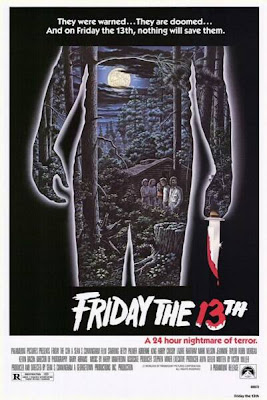 There's many horror films that are disparaged upon their initial release but enjoy the satisfaction of an eventual critical reevaluation, but Sean Cunningham's Friday the 13th (1980) is still regarded in most quarters as mediocre, despite launching one of most successful movie franchises ever. Even among today's generation of horror fans, Friday's classic status seems like more of an honorary gesture of respect, rather than a sign of passion for the film itself.

In contrast to Carpenter's Halloween, which is universally praised as the best of its series, a highwater mark for the genre, and which still has legions of new fans flocking to discover it, Friday the 13th's lack of play with contemporary audiences was addressed over ten years ago by the opening of Scream (1996) when Drew Barrymore's character failed to correctly answer the killer's trivia question: "Who was the killer in the first Friday the 13th?" Given that, it's not surprising to hear that the upcoming Friday the 13th remake will look to emulate the sequels more than the original.

But even though the perception is that it took a few films before the Friday series got all its pieces in place, for me it's always been first and foremost about the original. No other film in the series ever nailed the eerie sense of isolation that the original did. Once the sun went down on Camp Crystal Lake, it became a truly foreboding place. You really felt like you were out in the middle of nowhere with these kids. And Barry Abrams' photography has a grittiness to it that was abandoned by the slicker sequels. When it's night in this movie, it doesn't feel like the typical movie version of night time where the trees are perpetually backlit. You get the feeling that without a flashlight in these woods, you couldn't see your own hand in front of your face.

And there's an earnestness to the performances here that still plays well. I especially love the fact that these kids spend their last day on Earth doing such stupid, random shit (there's no activity too tedious for Cunningham to linger on, whether it be Bill strumming his guitar or Alice making herself a cup of instant coffee). It's endearing. It's also endearing that the kids play a risque game of "Strip Monopoly" that manages to not be titillating in the least.

Cunningham has never gotten much credit for whatever directorial touches he brought to Friday the 13th but even as familiar as this film's scares have become it's evident what a canny hand Cunningham had for goosing the audience. He shows just enough violence for it to have an impact and the reveals and the jump scares always come right when they should. Even though the climatic scare was cribbed from Carrie, I think that Cunningham actually improved on DePalma's final shock. So there.
And Mrs. Voorhees has always scared me way more than Jason. First of all, in several close-ups of her hands, we're actually seeing the hands of Tom Savini's assistant Taso Stavrakis so it appears that Mrs. Voorhees has hairy man-hands and that's definitely unnerving.
But it's the sick personal joy that Mrs. Voorhees derives from Final Girl Alice's terror that really creeps me out. Her mouth might be telling Alice "it'll be easier for you than it was for Jason", but her eyes are saying "ki-ki-ki-ma-ma-ma". It's not enough for Mrs. Voorhees to just kill Alice, she wants Alice to know full well what kind of butchering she's in for.

It would've been much easier for Mrs. Voorhees to stash Bill's body someplace, for example, rather than taking the time to impale him on a door with multiple arrows (a hideous defilement to which Alice can only say, "Poor Bill!") but Mrs. Voorhees prefers to go the extra mile. She's been getting away with this kind of shit since the '50s, after all, so there's no fear on her part that she'll drop the ball now.

When Alice does get the upper hand on Mrs. Voorhees during their final stand-off (apparently Alice is equipped with a bionic arm, by the way - how else to explain her ability to decapitate a person with one swing of a machete?), it's a true look of surprise we see on Mrs. Voorhees' face as she realizes that her reign of terror is at an end.
Come Friday the 13th, February 2009, the Friday remake will prompt more people than ever to disregard the merits of the original. But whatever its reputation, Friday the 13th will always rank with me as one of the all-time perfect horror films. A shocker of the first order.
Posted by Jeff Allard at 7:03 AM

Email ThisBlogThis!Share to TwitterShare to FacebookShare to Pinterest
Labels: Friday the 13th