Going For The Kill Shot 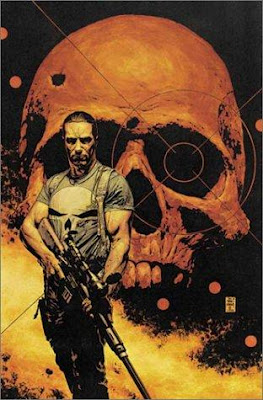 At first glance, Marvel Comics' hard-hitting vigilante The Punisher (aka Frank Castle) seems like he'd be the easiest of characters to translate to film. After all, the character's Death Wish-esque origin in which his family is felled in the crossfire of a mob hit doesn't call for any suspension of disbelief and his goal of killing all criminals is easily understood.

But yet the release of Punisher: War Zone tomorrow marks the third attempt to get the character right on screen with both the 1989 version starring Dolph Lungren and the 2004 version starring Thomas Jane not quite hitting their target. Lungren's version fared better overall - despite Lungren's inappropriate accent, the lack of the Punisher's iconic chest skull and the fact that Frank Castle shouldn't be spending so much time meditating naked in the sewer.
With Jane's Punisher, tone was an issue in that the filmmakers awkwardly tried to take comedic elements from early on in writer Garth Ennis' run on the Punisher (in the form of the surrogate family that Castle meets in his apartment building) and ply them with the grimmer direction Ennis had since moved the book into. It also didn't help that somebody involved in that adaptation - whether it be the writers or the director - was confused as to the Punisher's M.O..
Sure, they still had him emptying rounds in plenty of scumbags but to have Castle spending weeks putting a fake fire hydrant in front of Laura Harring's character car so she can get ticketed by the police, which in turn leads John Travolta as her onscreen husband to suspect that her and his best friend are having an affair and then gunning both of them down in a jealous rage is a lot of roundabout bullshit. That's just not how The Punisher rolls. He doesn't need to engage in that kind of prolonged manipulation - he'll just end you. That skull on his chest isn't just empty advertising.
In the real world, a person like Castle would be a sociopath rather than someone to cheer for but in the world of comics and movies where motives can be kept clear-cut, there's no need to wear kid gloves. While Batman is on too many T-shirts and lunchboxes to let his inner psycho loose, here's hoping that Punisher: War Zone lets Castle rack up the spectacular cinematic body count that comic fans are counting on.
Posted by Jeff Allard at 10:15 AM

Email ThisBlogThis!Share to TwitterShare to FacebookShare to Pinterest
Labels: The Punisher