A Sad Day In Horrorwood 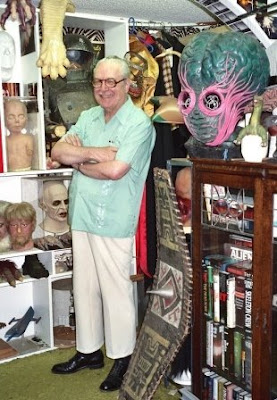 The world of horror has lost one of its most influential, inspirational figures with the passing of Famous Monsters editor Forrest J. Ackerman (aka 'Uncle Forry') at the age of 92. It's the boomer generation on which he left the greatest mark - the advent of Famous Monsters gave the kids of the '50s and '60s (including the likes of Stephen King, Steven Spielberg, Joe Dante, John Landis, and Mick Garris) their all-important first taste of the larger world of fandom. It may be hard for a younger generation to understand this now - with genre material regularly covered by the mainstream press and with the internet giving fans around the world instant access to each other - but at one time it was revelatory to discover through the existence of FM that you weren't alone in your interests. Through FM, Forry helped forge the fan community as we know it today.

The deliberately juvenile slant of Famous Monsters (marked by Forry's love of horror-endous puns) made it inevitable that FM wouldn't be able to stay relevant as the horror genre became more transgressive throughout the '60s and '70s but Forry's unflagging enthusiasm kept FM a cherished institution. I was among the first of the FANGORIA generation - with Fango #1 hitting stands when I was ten - but I never felt that FM wasn't cool in its own right. Even though FM was obviously a product of an earlier era and a different sensibility, its love of horror and sci-fi (a phrase that Forry coined) was timeless.
By the time I became aware of Forry, he was already as old as my grandparents. But seeing that instilled me with the belief that there'd never be a need to outgrow my interests, that they wouldn't have to be just a phase to be replaced by more sensible concens. 4E is gone now, but his efforts left the world a safer, happier place for geeks everywhere.
Posted by Jeff Allard at 9:42 PM