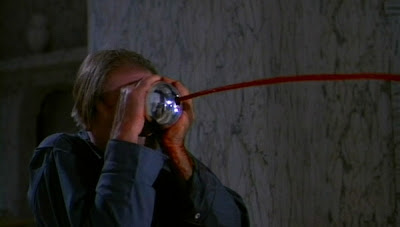 With the release of My Bloody Valentine 3-D on DVD this week, I'd like to nominate another horror franchise for a 3-D remake - Don Coscarelli's 1979 head trip, Phantasm. I know that plenty of people still regard 3-D suspiciously as a distracting gimmick but by now the technology has advanced to a point where it isn't the same hit-or-miss prospect that it used to be. And honestly, how frigging awesome would it be to see Phantasm's trademark flying silver spheres (with their protruding blades and drills) careening right off the screen?

3-D or no, I'd only want Phantasm to return if a remake was masterminded by Coscarelli himself. If he didn't direct it, I'd at least want him to write (he already wrote a script for a remake a few years ago when New Line had the rights to the property) and produce. With the list of still-untouched 'name' properties from the '70s and '80s having dwindled to just, well, Phantasm (seriously, is there anything else left?), it's only a matter of time before we see Phantasm reborn on the big screen (hey, now there's a title: Phantasm: Reborn). I just hope that when it does, that Coscarelli's vision will be augmented by the glory of 3-D. It's what the series was tailor-made for.

I could definitely be down if Coscarelli was involved! And 3-D tech is nothing like it was in the 80's at all.

I am actually surprised at how many lesser know horror films have been remade over Phantasm.

Glad to see a groundswell of support here - thanks guys! As for why lesser-known films have gotten the remake treatment over Phantasm, I'm guessing it's a rights issue. When a remake inevitably does happen, I just hope it doesn't fall into the hands of Platinum Dunes. I've actually enjoyed most of their remakes but Phantasm is such a personal favorite it'd bum me out for PD's house style to be applied to it.