The Beast In The Black 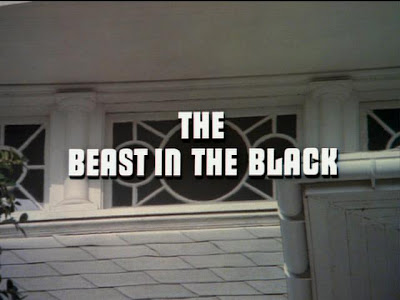 Nowadays with the easy access to all things horror provided by cable, DVDs, downloads, and so on, kids looking for a fright fix are living in a much different world than the one that Gen-Xers grew up with.

Back in the day, if you couldn't get into R-rated movies and your household didn't have a VCR, it was a big deal whenever anything horror-related would rear its head on TV - no matter how tepid it was. I was so hard-up for horror as a kid, I would even get stoked whenever Fantasy Island would take a turn towards the scary (which it often did, as in those episodes when Mr. Rourke would lock horns with Satan) and I thrilled to the episode of The Brady Bunch where the Bradys went to Hawaii and it appeared as though they had fallen victim to a cursed tiki idol.

But when earnest school teacher turned bumbling superhero Ralph Hinkley (William Katt) crossed paths with the eponymous entity of The Greatest American Hero episode, "The Beast In The Black" (originally aired on December 9th, 1981) that was heaven for me. GAH was my favorite series at the time and they were doing a horror episode to boot - how cool was that? 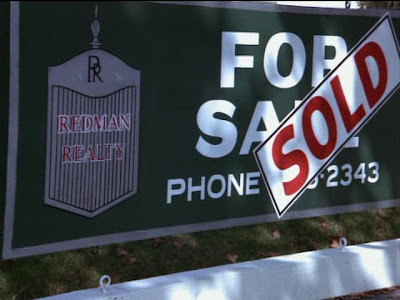 When Ralph is given permission to raid an old house scheduled for demolition of as many valuables as he and his class of teenage delinquents can carry, he rallies his students to do so in the name of raising money to buy a class present for their high school. Of course, whenever a home with a troubled history and an ominous "Sold" slapped on the realtor's sign appears in a movie or TV show, chances are good that it's haunted property and sure enough, the house in "The Beast In The Black" is plenty haunted. 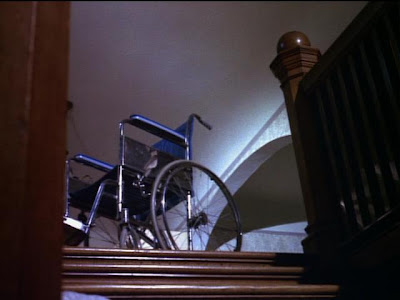 ...It's so haunted, in fact, that it even has a wheelchair that moves by itself and careens down a staircase, as in the then-recent supernatural shocker The Changeling (1980). 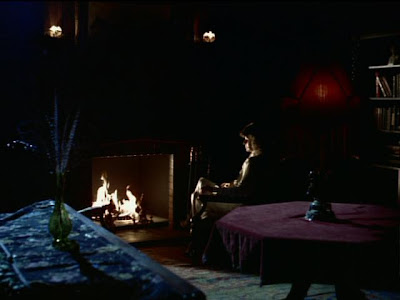 Scouting out the location ahead of the arrival of his students, Ralph and his cohort in crime fighting, FBI agent Bill Maxwell (Robert Culp), start to see what this old house is made of. Wearing his alien-made super suit, Ralph approaches a brick wall and is able to see past the wall to what looks like a portal into another dimension. Invisible to Bill's eyes, a woman (Christine Belford) sits in a parlor in front of a fireplace. 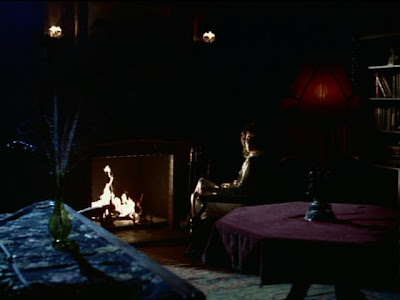 ...Turning when she senses Ralph's eyes on her. 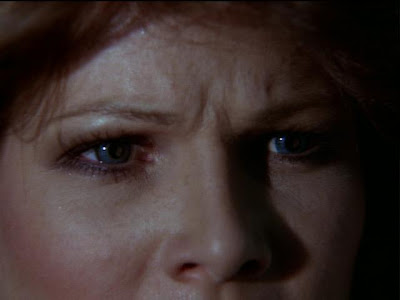 As Sheila Redman, a woman who died years ago in the house, the look of actress Christine Belford here reminds me of Karen Black in Burnt Offerings (1976) - specifically as Black's character looked at the end of that movie, with her brown eyes having turned an icy shade of blue. 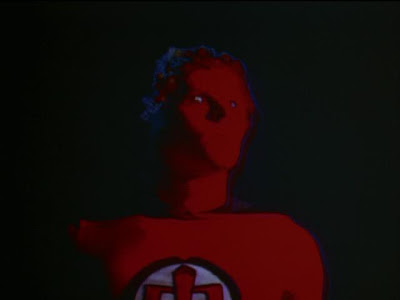 Believing the woman is silently imploring him for help, Ralph is able to use to suit to pass intangibly through the brick wall, into this fourth dimensional space. Instead of standing in the parlor he was just peering into, he's first wandering through a vast black space. 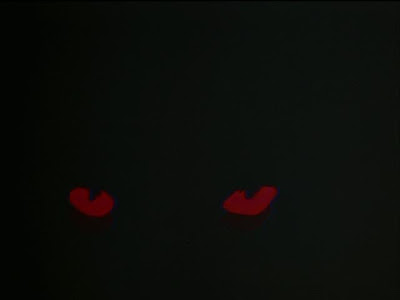 Inside that blackness, a pair of red eyes lock in on Ralph. 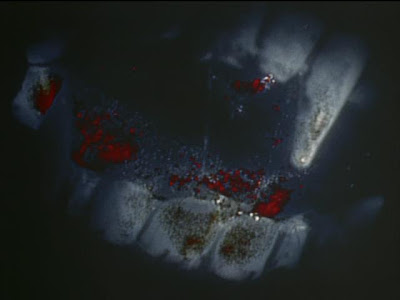 And whatever it is that those eyes belong to (the episode is vague as to what the Beast actually is - apparently some kind of watchdog from beyond), it makes lunch out of Ralph. In describing the omnivorous creature featured in "The Crate" episode of Creepshow (1982), Stephen King referred to it as like the Tasmanian Devil of Looney Tunes fame but that more accurately relates to "The Beast In The Black" in that, like that whirling cartoon tsunami of teeth and claws, the Beast flashes in and out of sight with subliminal speed. Ralph doesn't even get a chance to fight back, the poor bastard. 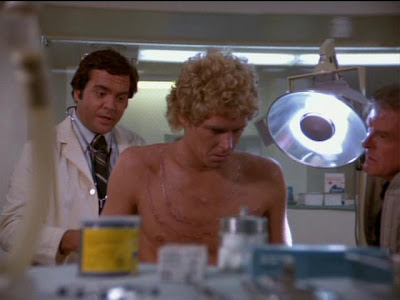 Making it out of the fourth dimension and to the local hospital, Ralph's body is seen to be covered in vicious welts. As a kid, this struck me as pretty hardcore. I mean, Superman never got torn up like this. It's common today to see heroes getting knocked around and bloodied but at the time it was a novel to see a super powered character be so vulnerable to attack. It's also interesting that, unlike most fictional heroes, Ralph isn't required to go back for a win in order to retain his heroic posture. Most heroes would've been honor-bound to not let anyone or anything get the best of them but in "The Beast In The Black" (written by Juanita Bartlett), Ralph doesn't let his ego put him back in harm's way. He got his ass handed to him but there's so sense of pride drawing him back to even the score. He only returns to the house in order to get his students out before the house can harm them. 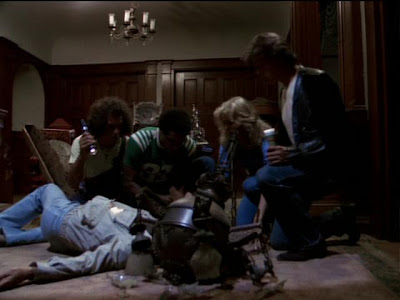 The rest of the episode is almost totally Beast-free, dealing with the machinations of the ghost to inhabit the body of Bill Maxwell after he briefly dies thanks to the lethal one-two combo of a brass chandelier and gravity. 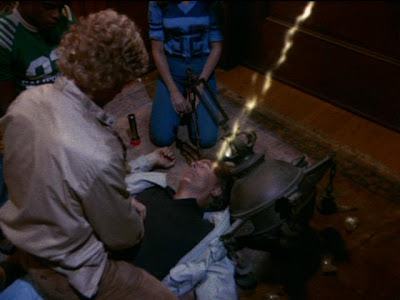 Sheila possesses Bill, and apparently will be content to live a new life as a man rather than be destroyed when the demolition crews bring the house down. 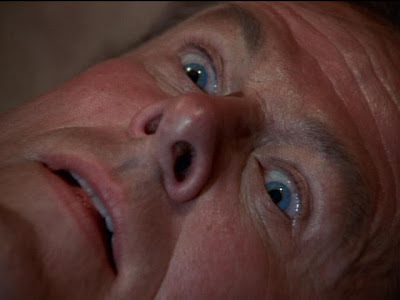 Culp does a fine job playing Bill as inhabited by Sheila, but the possession angle can't help but feel so-so after the ferocity of the Beast's attack (and to have Culp speaking in Belford's dubbed voice is unmistakably silly as well). The Beast makes an encore appearance in the climax, tearing Ralph another new one as he has to bring Bill/Sheila back into that fourth dimensional parlor in order to get Sheila out of Bill's body for good. As he does so, the Beast is chomping at his heels all the way. 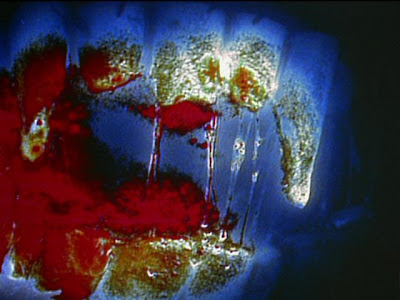 The Greatest American Hero struggled throughout its three season run to find a balance between the more realistic treatment of its characters and their world that creator Stephen J. Cannell strived for and the more sci-fi, creature-orientated program that the network felt would draw in kids. Usually those later shows were the weakest of the series' run, pushing the series towards infantile territory (not because of the fantasy elements themselves but because of how poorly they were handled), but "The Beast In The Black" was an exception. The episode may not have had a sustained sense of terror, or much logic (why Ralph turns to a psychic to locate Bill when the suit already gives him psychic abilities - which he uses in this same story! - is unexplained), but as directed by experienced TV vet Arnold Laven, "The Beast In The Black" did have a little bite to it.
Posted by Jeff Allard at 8:47 PM

Great review. Don't recall this episode at all, so it was like new to me! Cool stuff.

I loved this show as a kid--and it easily has one of the best theme songs of all time--but I don't recall this episode *at all*! Thanks for the heads-up.

No problem, Will - I'm sure the whole episode is posted online someplace!

The episode's available on Hulu:

I was in my late 20s during Hero's primetime run, and it remains one of my all-time favorites.

This episode is a favorite for several reasons- primarily because Bill's "death" scene shows the depth of attachment between the characters.

Perhaps it's an age thing- I was in my late 20s when "Hero" first aired nearly 30 years ago- but I was less impressed with the "Beast" than I was with the possession scene in the hospital. Great acting all around, great ominous background music- maybe the blurry red stuff scared you as a kid, but I still recall how all of us jumped when Bill turned around and had ice blue eyes. (This was back in prehistoric times, when families watched television shows together. ;-)

One other point- Ralph initially couldn't find Bill because Bill was possessed- there was no Bill to find. When Bill's personality resurfaced at Sheila's place, and he telephoned Ralph with his general location, one can assume the suit then had sufficient "input" to provide a usable hologram.

This episode's also noteworthy for some of stunt coordinator Dennis Madalone's best springboard jumps and for the tightly edited combination of Century City locations and stock composite flying shots which led to Ralph (Madalone) crashing through the apartment window.

There were really only two things in the show that bugged me- one was that Madalone, who did all of Ralph's stunts, looks nothing like Bill Katt. (Remember in the pilot when Ralph heaves the hospital orderly over his shoulder during his escape? The orderly was Madalone.)

The other's a real nitpick. Maybe it wasn't originally planned that way, but the logo on Ralph's suit was symmetrical. In the Superman series in the 50's, the "S" shield would appear backward when the cutters flopped the film to fly left to right instead of right to left.

No problem with "Hero"- except in all the flying shots in the first two seasons. Ralph wore a wristwatch, which would switch from his left to right wrist depending on his direction of flight.

That's one of those little details that once I spotted, I could never get it out of my mind. And now, neither will you. ;-)

Great blog, by the way- I'll be back.

Thanks Kevin - I love it when people leave comments that are 100% better than the actual blog post! Great info and insight on the show!

Sorry I missed this the first time around, but the link was posted on the Greatest American Hero fan board in time for Halloween, so here's to free traffic! :)

This was my all-time favorite show as a kid (10), snd still is today. I enjoy sharing my love for it with my young children, but alas, this episode they have yet to see. Each is as big a wuss about suspense & horror as their old man was at that age. (Took me a few years before I could watch this ep from behind closed fingers, or to watch William Katt in Carrie!) Of course, today give me a good Zom-Com and I'm happy!

"or much logic (why Ralph turns to a psychic to locate Bill when the suit already gives him psychic abilities - which he uses in this same story! - is unexplained"

The reason why he used a psychic instead of the suit, is due to the loss of the instruction manual that explains how to use the various functions of the suit. As it was Ralph and Bill had quite a hard time in figuring out what the suit can do and how to activate it's various functions.