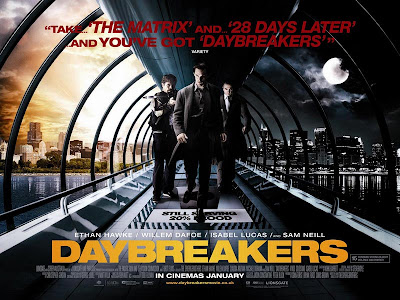 Simultaneously ingenious and half-brained, Daybreakers is better than what usually gets released in the dumping ground of January but there's still good reason why this didn't get released at a more competitive time of year. Written and directed by the Spierig Brothers, this tale of a future in which vampires are the dominant species is chock full of neat details involving how vampires manage their day-to-day (or rather night-to-night) existence. We see how their cars, their houses, their work places, are all designed to keep these busy bloodsuckers safe. It's a cool, elaborately conceived world that the Spierigs have come up with. However, in crucial areas their logic gives out and Daybreakers' story of the urgent race to invent a blood substitute before the world's supply of the real thing runs dry is something less than special.

In theory, it's a decent idea to hang a movie on - one with a topical metaphor to boot - what happens to a species when it burns through its natural resources? But that the vampires have allowed their situation to progress so far before discovering a valid way to cope with it seems, well, bloody ridiculous. When it's announced that there's only a month's (!) worth of blood left to sustain the vampire race, you have to wonder - who's running this monkey farm?
Research is being done to find a blood substitute but in the meantime, the vampire's management of their limited resources leaves a lot to be desired. Perhaps you could say that it's only a fitting analogy given our own less-than-perfect skills in harvesting the natural world but it feels more like the Spierigs wanted to start their story with vampire society off a crisis point and didn't care how much sense it made. Had they introduced the idea of a plague unexpectedly wiping out a majority of the human population, that would've been better - anything other than "whoops, gettin' low on blood now!"
So right off the (vampire) bat, Daybreakers is one of those movies were the characters are forced to behave like idiots in order to serve the story - like the questionable logic behind humans who choose to travel by nighttime in a world populated by vampires. When you have an underground movement of humans who need to live by their wits so strategically challenged that they transport a large group of survivors in the dead of night only to run afoul of a vampire attack, that's just bad writing. You'd think these people would have a pretty hard and fast rule about putting as many odds in their favor as possible and only make long journeys during the day, but that's just me. In another scene, these crack survivalists let a vampire they're hoping to recruit to their cause wander out of the room unattended to take a phone call (because he definitely couldn't be talking to the vampire police force that's hunting them down!) - causing one to wonder how it's possible that they've managed to last so long without being caught or killed.
While the film's pseudo-science has been given plenty of thought by the Spierigs, the rest of the movie - not so much. Conceptually, one the biggest missteps is that they've made it look so miserable to be a vampire. The Spierigs have come with with all kinds of cool tech to facilitate their vampire's nocturnal lifestyle but they forgot to make it look appealing - past the opportunity for immortality - to actually be a vampire. These creatures may be at the top of the food chain, but feeding on the world must not all that because every one of them looks bored to tears - which is funny, because this movie takes place in 2019, just ten years after the vampire plague has hit humanity. That's hardly long enough for the ennui of living forever to set in. And save for a couple of characters, apparently being a vampire in this movie also has the unfortunate side effect of turning you into an evil asshole, making the film seem very one-dimensional in its outlook (and again, the timeline is problematic - would so many people who were human in the recent past be so quick to erase their sympathies for humanity?). The Spierigs do have a pretty terrific cast on their hands, though - I never thought I'd see Ethan Hawke, Sam Neill and William Dafoe all together in a frigging vampire movie but here it is.
Some horror fans will rush to embrace Daybreakers just for the fact that it's a new vampire movie that, with its hard-R bloodletting and lack of romance, is proudly not in the Twilight camp. But it's also not very good. While Daybreakers is an improvement over the Spierigs' first film, Undead (2003), as storytellers they've still got a ways to go. Style, however, is something they've got in spades - the Spierigs give plenty of kick to the action scenes here.

With its solid cast, fast-pace, and striking visuals, Daybreakers is never less than watchable. The problem is, as soon as you give it any thought, it crumbles away to nothing - like a vampire at dawn.
Posted by Jeff Allard at 7:07 AM

That's dissapointing to hear given that, as you mentioned, conceptually it sounds incredible. I'll be checking it out sometime this weekend.

Sounds like about what I expected. I thought 'Undead' was vastly over rated, and as potentially cool as the idea behind this movie looked, I wasn't holding out much hope. Probably just wait for the DVD on this one.

PoT, I have to say - if this is the worst horror film I see this year I'll be happy because it's pretty ok. I just think that it's very detailed on one hand and way underthought on the other.

Bob, I really hated Undead so this is a major step up in my book. A cheap matinee or DVD is about right for Daybreakers.

Thought it looked good but expected it to be a bit too polished. Still check it out though.

This wasn't on my hotlist of 'must see'.
The idea of the vampires being 'large and in charge' is nifty enough, but even from the previews the whole 'running out of blood' thing seemed silly.
... I fear I've grown kind of suspicious of just about anything vampire-related these days.

Has anyone ever made a movie about what vampires do after a nuclear apocalypse?

Sarah, Daybreakers is definitely polished but its look is the best thing it has going for it.

Knob, I don't think anyone's done a post-nuclear vampire movie yet - but they ought to!

Sorry, I didn't know where to post this. I gave you a blog award. Stop by and see and then pass it on.

And keep up the awesome work!

I couldnt be bothered with this flick, didnt pique my interest at all, but I will likely give it a go when it has no line at Netflix. Vamps < all. Thanks for the heads up though Jeff, I didnt realize that it came from the director of UNDEAD!

Amanda, thanks a bunch for the award! I'll be posting about it soon!

And Carl, you're welcome for the heads-up! Definitely give Daybreakers a peek on NetFlix.