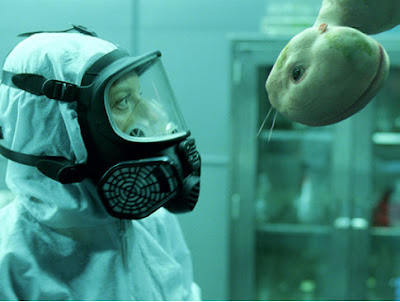 Whenever scientists play God in a horror movie, it seldom goes well and Splice is no exception. I'm not sure if Splice is trying to say that scientists shouldn't go certain places or that they should just have their personal shit together before they do. It's a toss-up. But whether writer/director Vincenzo Natali is anti-progress or just sees people as too flawed to shoulder the responsibility of bringing new life into world (like, really new life), I wasn't that taken with Splice.

Being a parent isn't easy, as scientist couple Clive (Adrien Brody) and Elsa (Sarah Polley) come to find out. Of course, when you've invented a new life form in a lab, you've compounded the already daunting difficulties of child-rearing. When you're rearing a child, it helps to know what the hell you're rearing.

The genetically spliced offspring that Clive and Elsa create is dubbed Dren and with her accelerated growth cycle, the little thing sprouts from a tadpole to a young lady (albeit a young lady with a tail and stinger) in no time. But as Dren was never meant to exist and Clive and Elsa are a little dysfunctional as individuals and, naturally, as parents, her quality of life is lacking. Poor kid!

If this was the first movie in history to depict scientists messing with shit they aren't ready to mess with, Splice might've been provocative. As is, it feels second-hand. Natali is certainly conscious of the cinematic lineage his film is a part of, naming his scientist protagonists after Colin Clive, the actor who played Dr. Frankenstein in the original Frankenstein (1931), and Elsa Lanchester, who played the titular character in Bride of Frankenstein (1935). Given that awareness, you'd think that Natali would've have come up with a story that didn't follow such a rote trajectory. I mean, come on - we've been here before. Tampering with nature? Bad scientists! Bad!

If you're going to make the umpteenth movie about overreaching scientists bringing a monster into the world, at least make it entertaining. Splice is not that. Clive and Elsa are not especially likable people. They're cocky and self-absorbed and their act of bringing Dren into the world reeks of carelessness. This is all intentional on the part of Natali. I'd be very surprised if he intended anyone to sympathize with his lead characters. That in itself isn't a problem. The problem with Splice is that the story is so boring. This is like going back to Horror Science 101.

Clive and Elsa are hotshots in their field, rock and roll stars of genetic engineering (they even made the cover of Wired!) but when the corporation footing the bills for their research doesn't want them to explore the option of splicing human DNA into a hybrid creation, they go rouge and create Dren as a side experiment. What follows is all predictable stuff for anyone who's ever seen a horror movie. Even the one provocative moment in the film isn't really so provocative. I'm gonna go ahead and talk about it so skip the next paragraph if you haven't seen Splice and you don't want any spoilers.

Alright - for those still sticking around, there's a scene where Clive is seduced by Dren and they cross a line that should never be crossed between man and miscellaneous. I get the feeling that Natali thought he was really pushing the envelope here but not only can the audience see this would-be shocker coming from so far away, but the only dramatic consequence from this scene is that Clive gets busted by Elsa. That's it. It amounts to an awkward "whoops!" moment but he might as well been caught banging some random chick. He and Elsa argue about this one-time momentary lapse of reason and then move on. There's a lot of truly weird, kinky, uncomfortable places that Splice could've gone in sexualizing the relationship between Clive, Dren, and Elsa - I can only imagine what David Cronenberg or Frank Henelotter would've done with this material! - but Natali barely cracks the door open before slamming it shut and running away.

In the end, Splice is a whole lot of nothing. After all the provocative posturing, it comes down to chasing a monster through the woods at night. There's a final act of violation that would be shocking if it hadn't been done in much more queasy, appalling fashion in The Beast Within (1982). The epilogue doesn't seem so much like a troubling coda to the film's action as it does suggest the unwanted possibility of a sequel. Most of all, it left me longing for the last shot of Humanoids from the Deep (1980).

Splice did not instill me with a new-found concern that genetic scientists need to tread carefully but rather that internerd sites should be banned from hyping films. I've lost count by now of how many films that sites like Ain't It Cool News and C.H.U.D. have acclaimed months ahead of time as the smart new genre film that fans need to support only to discover that the movie is pedestrian at best. It's worth noting that Splice isn't a sequel or a remake or PG-13 but it's still weak sauce. Some will point to its failure at the box office as a sign that audiences just don't have the appetite for challenging genre fare but while that may prove to be true, until some challenging genre fare does come along, we just won't know.
Posted by Jeff Allard at 2:53 AM

No interest. Maybe it's because I'm Canadian and we're not suppose to celebrate our 'famous' if they still live at home.

But most prolly because it's a sci-fi horror about an 'alien' kid.

And I agree about the AICN and CHUD. Now if I read an AICN blurb, I hesitate on renting - they're not to be trusted.

I always hated to say that sites like that were in the pocket of studios or filmmakers but it's looking more and more like that all the time. And I don't think it's a monetary thing so much but a wanting to be in with the cool crowd thing, or to be ahead of popular opinion. There's less and less critical perspective on these sites. Even Kick-Ass was just hyped so out of proportion to the movie that it was. It was medicore at best and arguably kind of shitty but you sure wouldn't have known it from AICN or CHUD.

As for Splice, it's good for a rental or a cheap matinee.

Not sure why but I really wasn't expecting this to be anything but a rote scientist/monster movie with better actors... a bit more intelligent.
Not a bad movie... just not all that interesting and not as strange as 'Species'.
I'd watch 'The Human Centipede' again before revisiting 'Splice'.

Wow, bummer to hear it. I've read nothing but good things. I'll still check it out but you'd think with being obvious with its self-awareness that it would at least dare to be somewhat different.

Knob, this is really a middling, middle-of-the-road kind of movie. It never goes far enough with the material so the brief glimmers of edginess are all the more frustrating as they suggest what the movie could've been.

PoT, the reviews have been mostly positive but there's some other dissatisfied customers out there. I didn't regret checking it out. It's definitely way more worth anyone's time than the Elm Street remake was - but that doesn't make it an especially good movie.