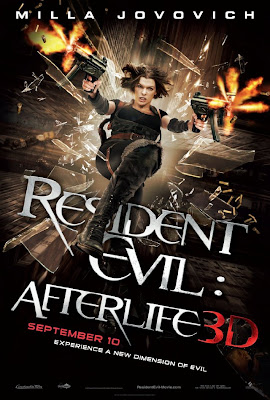 Video games and I parted company many years ago. I'm blown away by the graphics of today's games and I'm sure they're great for people who have the time to devote to playing them but that's just an area of the pop culture landscape that I'll never bother catching up with. I've never even owned a home gaming system, that's how out of the loop I am. Movies based on video games, however, I'm all for. Sure, these movies are usually not so hot but I never expect much out of them anyway so if they suck there's no heartbreak involved.

When it comes to this cinematic sub-genre, Resident Evil is far and away the biggest success story. I know that fans of the RE game are, by and large, pissed off by these movies but someone must like them because here we are with the fourth film now in theaters. With Resident Evil: Aftelife, director Paul W.S. Anderson is back behind the camera for the first time since the 2002 original (having produced and written the other two installments). And while the trailers didn't do much for me and the use of 3-D wasn't a great selling point, I ended up enjoying Afterlife. If nothing else, it proves that the only way to do 3-D properly is to shoot in 3-D. James Cameron got a lot of flak recently for what was perceived as high-handed comments about movies like Piranha 3-D that are converted post-production into 3-D but Afterlife proves the guy's case. The guy might be arrogant but he's not wrong. Cameron might hate this movie too, for whatever reason, but he should at least give it up for the 3-D, because it looks damn good.

After a series of recent films - from Clash of the Titans, to Alice in Wonderland, to Piranha - that were all converted (unimpressively) from 2-D to 3-D, and animated films like Toy Story 3 that didn't seem to have much interest in embracing the format beyond its usefulness as a box office draw, Afterlife comes as a refreshing reminder of how great 3-D can be if done with the right technology and the right attitude. The headache inducing Piranha soured me somewhat on 3-D but Afterlife has me singing its praises again.

Regarding the story of Afterlife, it is what it is. If you haven't seen the previous films, don't bother jumping in now as Anderson's Afterlife screenplay presumes the audience is already knowledgeable about the series. There's a little bit of re-capping and exposition going on but not enough to have this make much sense to a RE neophyte. For those who do know the franchise, this picks up where 2007's Extinction left off and along the way, past characters - including Ali Larter as Claire - return. I won't even going to trouble you - or myself - with a synopsis. All that's important is that Alice (Milla Jovovich - arguably the hardest working female action star of her generation) is still out there gunning for the evil overlords of the Umbrella Corporation and trying to find survivors in a world overrun by zombies.

As a director, Anderson brings the cheese but - for what it's worth - it's elevated cheese. He's recycling Matrix-style action moves but by now that qualifies as kicking it old-school so way to go, Anderson! I haven't seen the other two sequels since the theaters but this struck me as being the best of the bunch since the original (all I remember about Extinction is a lot of sand and crows). I wouldn't recommend Afterlife to be anyone's first taste of the franchise but if you've been with the series from the start, this is a step up from what's been served up in the last two films.
Extinction made the series seem like it had gotten too long in the tooth to continue but I think this latest entry will prove to be enough of a shot in the arm to give this franchise the extended Afterlife that its title promises.
Posted by Jeff Allard at 9:13 AM

Well said. This is a perfect description of the film. The only point I might argue is that you need to have any knowledge of the prior films to keep up. I didn't, and had no problem following the story.

I actually liked Extinction the best of the three and am excited for the newest entry in the series. Word on the streets is the new film nabbed number one with $30 million, so I guess we can expect another theatrical sequel in a few years, and I am all for it.

Sure the series is cheesy, but it is fun, and fun in a way that theatrical movies aren't as much anymore. They are pure B-movie fun, with all one needs for a mindless good time, something that people love in films from the past, but can't seem to wrap their head around in the present.

I don't think you need to know much. Milla and killing zombies pretty much sells it. i love how you just accept the film for what it is. It's quite simple really. People love Milla in full-on action mode.

Deb, I guess Afterlife is friendly to newcomers after all!

Matt, I'll have to give Extinction another look one of these days. I've blanked out on what happened in that one. And I agree - people love the guilty pleasures they grew up with but have no patience with the same kind of movies now. Unless they're self-consciously retro-flavored films, like Machete.

And SF Fanatic, I hope Milla will keep kicking ass on screen for a long time to come!

The screenplay is an incoherent mess, but Anderson knows how to put together some excellent action sequences. Great design work all around, too. I don't know if it's a "better" movie than 'Piranha 3D', but I definitely had more fun with it.

Yeah, "better" is a hard word to use but Afterlife was at least a better time at the movies for me.

Yeah, EXTINCTION was my fave of the series as well if only for a hot-looking ass-kickin' Ali Larter and the post-apocalyptic setting, not to mention the scene were Milla Jovovich torches a sky full of crows via telekinesis was pretty bad-ass.

I guess that settles it, J.D. - between your recommendation and Matt's, I've definitely got to watch Extinction again!

I third (thirded, ?) the notion that Extinction is an excellent film. . .lots of great tension and it made up for the goofy second film by making some of the characters from the second film tragic characters. I can't look at Mike Epps the same again!

Great review. The biggest hurdle of 3D technology is the 'headache' factor. My dad refused to see Avatar because he says 3D gives him a headache. I tried to explain that the NEW 3-d, if done right, immerses you in the environment. It doesn't shoot things out at you. He still didn't bite. . .but all these crap 2D films translated to 3D don't help! As far as I know, there are only two 'true' 3D films right? Avatar and RE4?

I do think it's comical that the third 'true' 3D film will be Jackass 3D. Nothing like getting seduced into a new technology and then having balls shoved in your face. Oi vay.

I don't know if I can take Jackass in 3-D! I might have to pass on that one. As for "real" 3-D films, I think the My Bloody Valentine remake was real 3-D. That was very well done, I thought - probably still the best of the new 3-D horror films so far.

I'm kind of a fan of the second RE movie, but like you, I don't remember much about Afterlife other than crows and the desert. And trucks.