A Black Day For Blue And Yellow 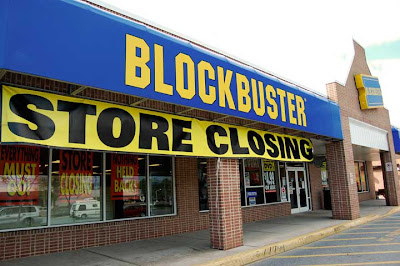 It's become a common sight to see video stores going out of business but I was still jolted when I passed by the longest-running Blockbuster in my area today and saw it sporting a "Store Closing" banner.

Most of the Blockbusters around here have already folded - but this particular location (the night my parents finally bought a VCR, we rented our first tapes from there - I forget what my parents got but it was Pink Floyd: Live in Pompeii for me) had managed to weather the changing times...until now.

In Maitland McDonagh's 1995 book Filmmaking on the Fringe, Joe Dante described an abandoned ending to his 50's nostalgia piece Matinee (1993). As he said: "in an earlier version of Matinee, the main story was a flashback, and the script ended with the theater being demolished to make way for a video store. It was too depressing."

But not quite as depressing as this, I think: 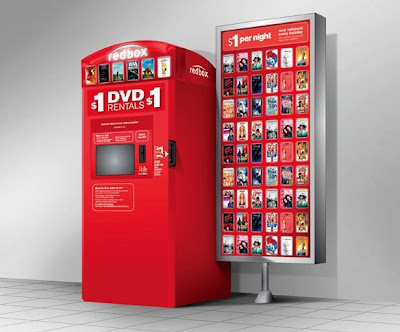 And even these shitty vending machines will be obsolete as more and more people opt to obtain their films through digital means.

I'll admit, over the past few years I've probably gone into a video store maybe three or four times at the most. But still...it's sad to see them vanish altogether. It's like watching my past evaporate. Working at the two local chains that I worked at during the '90s (Movie Shops and Flix Video, represent!) was a joy. I even met my wife during my last year behind the counter, when she began renting as a customer. So I owe, well, everything to my time in video.

It boggles my mind to think that the next generation of film fans won't even set foot in video stores, never mind work in them. I know that in another five or ten years, there will still be some drive-in theaters scattered throughout the US but the same can't be said for video stores.

And if that thought doesn't make you feel old, this will:

I started out with Advance Video that was in the Westover Shops in Chicopee. Then I tried Pleasant St Video for the more obscure imports. The when BlockBuster came in I tried them but was always discouraged. Eventually I joined NetFlix back in 2000 when they were still shipping from California. The week to get movies back and forth was taxing, but very quickly they set up local distribution sites. I also stream from their site, but I haven't bought into the streaming to my TV. Maybe an Apple TV, but I'm not sold just as of yet. Heck I still own a VCR or 2.

I never actually worked in a videostore (although I did work in another ancient style of shop, the used bookstore) but during my film student days, certainly hung around them enough. Our local mom-and-pop shops had a great stock, but the BBs here were pathetic. But yeah, once I started Netflix in 2001 I never really looked back. I recall when videostores had big computer printouts of their video catalog that you could look through. And the beta tapes that took up shelves for oh, about a week!

I'm so mixed on this for so many reasons.

I grew up near 112 Video, which any Long Islander knows was THE place to rent every imaginable horror VHS ever made. It miraculously still stands and warms my heart to step into (you know...once a year).

HOWEVER...As much as I treasure my days prowling the video shelves and still DO so at indie sellers like Kim's Video in NYC, I honestly have just as much success hopping on Netflix, choosing a movie, and getting recommendations I may never have heard about. I know this makes me sound a tad mod and hip and all, but I can't deny the convenience of modern streaming and the design of DVDs makes moviewatching almost more enjoyable in a lot of ways.

There is one Blockbuster I know of in Richmond that is closing. We still have an indie video store, but there has been heavy acknowledgment from the owner & the clerk that I dated that works there that they're on their way out sometime in the near future. I only go in there once every 2 or 3 months now. They still have some stuff that Netflix won't or can't carry.

Blockbuster was good recently for renting really crappy movies for 99 cents. But since Netflix Autoplay has upped their crap factor, there's no need to set foot in Blockbuster.

I worked in a Suncoast retail video store in the late 90s-early 00s. They closed down 4 or 5 years ago.

I love Netflix. I hate Blockbuster. I hate Redbox. I love(d) mom-and-pop video stores. Suncoast is okay, but Media Play was the best store on the planet. Books, music, movies, figures, posters, shirts...they had everything.

Mark, digital is definitely the way things are going but I will always have a stubborn, romantic attachment to DVD and VHS. Speaking of Pleasant St. Video, I wonder how those guys are holding up these days.

Will, I agree that BB never had a great selection - and they really went off the rails, in my opinion, when they converted entirely to DVD. Lame! Still, that BB location in my neighborhood was the last gasp of the video industry here and I can't help but be sorry to see it go.

Emily, I can't argue with the amazing convenience of Netflix but I do think the experience of going out, prowling through video shelves, and interacting with real flesh and blood people along the way was an invaluable and intractable part of being a movie buff in the '80s and '90s. It makes me sad that so much of our lives are being shoved into the digital realm but whaddya gonna do?

Sarah, the other thing that bums me out these days is how many retail outlets have vanished and how many more are on their way out. It used to be that you count on places like Strawberries, Waldenbooks, Circuit City and Media Play being around but now they're history. And it looks like FYE and Borders are going that way now, too.

Speaking of Media Play, Dom, I'm with you all the way in loving that chain. I worked there part time in the late '90s and shopped there till the day they closed their locations. That place kicked ass!

I'll always miss roaming through video stores... the art of the VHS boxes... but fuck Blockbuster. The ran all the little mom & pop places out of our area long ago. They were always miserable places for me... and I hated their anti-porn stance.
I also spent time working in a video store... those were good times. Netflix is faster, more convenient... but like you say, there is no community aspect to it... especially since they dropped all their online community tools.
Theaters >video>steaming... we isolate ourselves more and more.

It's true, Knob. I guess the younger generations coming up will take it all in stride but for those of us old enough to rememeber the way things used to be, it's a bummer.

I also liked Media Play, but as they continued to struggle, they raised all of their prices and it really wasn't a deal to shop there anymore.