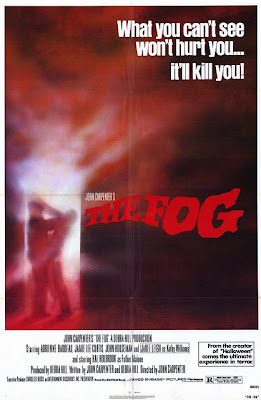 In John Carpenter's The Fog (1980), the hour between midnight and one belongs to the dead as the coastal town of Antonio Bay is visited on the celebration of its centennial by the long-dead men whose betrayal and murder made the founding of the town possible. A much-loved entry in Carpenter's filmography (if I had to choose only five horror movies to be able to watch for the rest of my life, The Fog would have to be one of them), The Fog enjoys a reputation as a great ghostly tale. But I contend that The Fog is less an old-fashioned ghost story than it is Carpenter's version of a zombie movie.

The shambling, leprous crew of the long-sunken clipper ship The Elizabeth Dane are not ethereal spirits. They're the walking dead, risen from their watery graves to exact revenge. Carpenter described The Fog prior to its release as being his tribute to EC Comics - beating Stephen King and George Romero's Creepshow to the punch in this regard by two years (even the seaweed-strewn ghouls of that anthology's "Something To Tide You Over" bear a close resemblance to The Fog's soggy seamen) - and if there's one thing that EC's tales were most known for it's the living dead.

The crew of the Elizabeth Dane may not be zombies in the Romero tradition but they keep perfect company with the Templar Knights of the Blind Dead series... 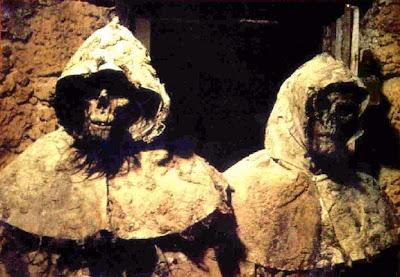 ...as well as with the undead Nazi soldiers of Shock Waves (1977), a zombie gang that also arises from the depths of the ocean. 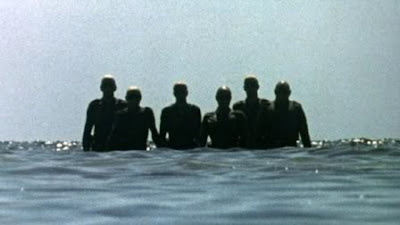 Unlike the Romero school of the undead, these cadaverous crews aren't randomly born from plagues or viruses. They aren't comprised of our family, friends and neighbors; instead they're part of ages old, members-only clubs.

The Fog's zombies also have a kinship with the resurrected son of W.W. Jacob's 1902 short story "The Monkey's Paw." As that story's grieving couple hear their slain son knocking on their door in the dead of night after he's been wished back to life, so to do the dead in The Fog insistently knock and wait for the unsuspecting occupants to let them in.

At the film's climax, though, the crew of the Elizabeth Dane forget to knock and mount a full-on siege on the town's church - a climax filled with imagery that's instantly identifiable as classic zombie movie iconography: 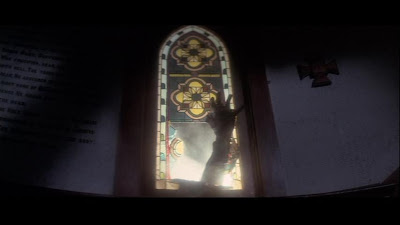 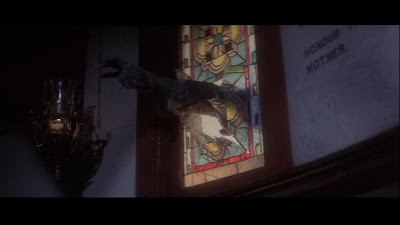 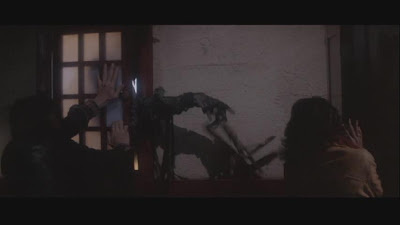 The grasping, rotting hands of the dead bursting through windows? The living desperately trying to man the barricades? That's a zombie movie! But let's take a closer look at what we're dealing with here.

I know it's hard to see in this darkly lit pic, but come on... 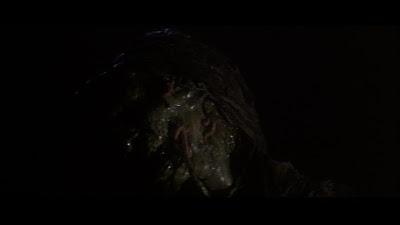 An undead face crawling with worms? In a police line-up, you couldn't tell that apart from a Fulci-style zombie! 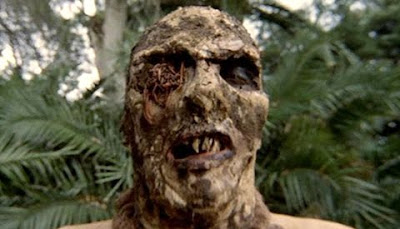 I've blocked most memories of the 2005 Fog remake from my mind but I do recall that the new version gave the crew of the Elizabeth Dane many more supernatural abilities and let them dispatch their victims in more fantastical, less hands-on ways than Carpenter did.

I'm sure the makers of the new film (Carpenter and Debra Hill participated in the remake as executive producers but I would think their involvement barely extended beyond accepting a paycheck) thought it would be way more cool to have their CG-abetted ghosts be able to do more than just attack their victims with swords and hooks.

But that just shows how little director Rupert Wainwright understood the movie he was remaking. He thought The Fog was a ghost film, the poor dope, when it's always been a zombie movie in disguise.

Great blog entry, Jeff. As you know, The Fog is my favorite horror film of all-time. And the church siege scenes are second only in greatness to those in which the various townsfolk-in-peril make their way to the church with only Stevie Wayne's voice letting them know which roads the titular mist has cut off. One of the most tension-filled sequences ever captured on celluloid, in my opinion. And I love the comparisons to another great flick, Shock Waves!

I'd say Debra Hill's participation in the remake of The Fog was extremely limited, given that she was dying of cancer during pre-production and in fact passed away around the time shooting began. It's too bad the finished film isn't a better tribute. Or a better anything, for that matter.

"But I contend that The Fog is less an old-fashioned ghost story than it is Carpenter's version of a zombie movie."

Interesting, as I would really like to know more about Carpenter's intentions, as well. I love The Fog, also, and it's one of my favorites from him. I had the Laserdisc and have the original DVD release; and on the commentary, Carpenter alludes that he did want to make a ghost story. The John Houseman beachside tale was a fine, atmospheric start. However, after completion of the film, several scenes were shot and then, included. For example, the scene where Buck Flower and crew are on the water--the attack scenes were filmed later and inserted.

The Fog seems to me a wholly atmospheric film, punctuated powerfully at times by undead scenes. It's a very odd yet effective mix.

My favorite scenes in The Fog have Nancy Loomis and Janet Leigh. "You're the only person I know who can make "Yes, ma'am" sound like "Screw you." "Yes, ma'am." Also, the scenes with Jamie Lee Curtis and Tom Atkins are surprisingly endearing--"Are you weird?" "Yes, I am. I am weird." "Thank God. The last person who picked me up was so normal I thought I'd go crazy."

Vince, thanks - it's always a pleasure to give a shout-out to THE FOG!

Arbo, I agree. In the post, my comments on Hill's involvement in the remake probably sound more dismissive than I intended. I think Carpenter has an indifferent attitude towards the remakes of his films but as the last production Hill was involved in, it's a shame it wasn't a more fitting finale to her career.

Hans, I've read many interviews with Carpenter when he references THE FOG as being a ghost story but it does seem that, whether consciously or unconsciously, he packed THE FOG with more than it's share of zombie imagery. This isn't a movie where specters float on the air or pass through solid walls. Instead, you've got these undead creatures crashing through windows and tearing through doors.

And I agree about the scenes with Leigh and Loomis. Of all of Carpenter's stock players in his early films, Loomis was always my favorite thanks to her acerbic delivery.

And Shock Waves really was much better than I thought it was going to be.

I love SHOCK WAVES - it's one of my favorites! It's been at least fifteen years since I last watched it though so I think I'm due to give it another look.

Love THE FOG - definitely one my all-time fave Carpenter films. The mood and atmosphere - esp. the slow burn pacing gets me every time. I also dig how JC takes the time to introduce to all the main characters and their place in the town. By doing that we start to care about 'em and this pays off at the end when everything goes crazy. This is something that the remake forgot or just decided not to do. I too like to pretend the remake never happened.

I always thought of The Fog as sort of a zombie movie too. Or at least a very ambiguous zombie movie.

I've pushed the remake out of my brain. If you've watched the extras on the first Masters of Horror episode that Carpenter did, he stated that pretty much all he cared about was watching basketball. So I think the remakes are just ways to collect some money.

J.D., I'm usually pretty upbeat on the subject of remakes but THE FOG is one I'm happy to pretend never happened.

Sarah, I've seen and read several interviews where Carpenter has said that as long as someone wants to pay him, he's happy to let them remake his films. Some people might think he should be obliged to give more of a damn but I think it's perfectly acceptable for him to take the money and run.

I did read awhile back, however, that he had put down some stipulations in regards to the Escape from New York remake that were pretty awesome and that basically laid down the law as to how Snake Plissken should be portrayed. So based on that, I guess he cares to an extent but I think he also realizes that it serves him no good to invest too much energy in what is going to be regarded - whether for good or bad - as someone else's work anyway.