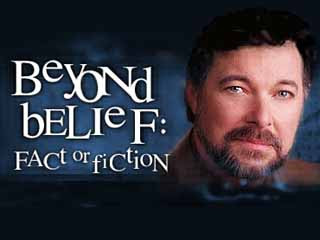 There was a lot of classic terror on the tube in the '70s but anyone who grew up then can tell you that the scariest TV show of the decade was In Search Of, hands down. To older viewers, the show's quasi-scientific investigations into Bigfoot, U.F.O.'s, haunted houses, and other strange phenomena must've seemed like hooey but for younger viewers like myself, who easily accepted the contents of each episode as real reportage, it was instant goosebumps.

Decades later, long past childhood and much more jaded, I found myself hooked on Beyond Belief: Fact or Fiction - a program devoted to plumbing the paranormal that managed to make In Search Of look like a boring slave to the truth.

Airing on Fox from 1997 to 2002, each hour-long episode of Beyond Belief presented five dramatized tales of incidents so improbable that they begged for supernatural explanation. The challenge for viewers was to decide which of the program's stories were fact and which were fiction with the "answers" revealed at the episode's end by the host (James Brolin for Season One and Star Trek: The Next Generation's Jonathan Frakes for Seasons Two through Four).

With each episode's stories kept to a taut length, ensuring that there'd be no lagging on the way to their ironic closing stings and the directors (among which was Hellbound: Hellraiser II's Tony Randel, who helmed twenty one episodes - the most of any BB director) steadfastly refusing to wink at the audience, the show made for addictive viewing. And famed voiceover talent Don LaFontaine handled the narration for the first three seasons (Campbell Lane took over for the last season), calling back fond memories of his indelible voiceover work for horror film trailers.

Watching BB as an adult, I thought the show played perfectly as comfort food but for younger viewers, I imagine it was as much a source of sleepless nights as In Search Of had once been for me - as they really had to wonder: Fact or Fiction?

Email ThisBlogThis!Share to TwitterShare to FacebookShare to Pinterest
Labels: Beyond Belief: Fact or Fiction

As much of a curmudgeonly skeptic as I am, I still love stuff like this. Interesting that 'In Search of' had the second in command of the original 'Star Trek', Leonard Nimoy, as host, and then the 'Next Generation's number two picked up the torch.

Great post. I enjoyed this show when I was younger and do believe it gave me a few sleepness nights. I also think I was asked not to let the kids I sometimes babysat watch it, which of course meant that we all counted down the minutes until it was on.

I enjoyed this snow, too. Wish it had been on longer. Fun, simple, eerie stuff. Always welcome!

Bob, I only wonder what In Search Of would've been liked had the original host choice, Rod Serling, lived to be In Search Of's famous figurehead! X-Files' Mitch Pileggi, hosted a very short-lived In Search Of revival in the early 00's that just didn't have the right flavor to it.

William, it makes me feel old to think that there's a generation of kids who are now grown adults who grew up on BB! My own babysitter back in the day let me stay up late for Fantasy Island, which was frequently scary (at least it was to me at the time).

Wings, I just wish there was still room for a show like this on TV rather than more reality programs.

YES! Would love more stuff like this and less reality CRAP!

I missed this when it was originally on - but have caught up recently. Find it rather interesting and entertaining. I agree, better than the reality stuff they call tv now :)