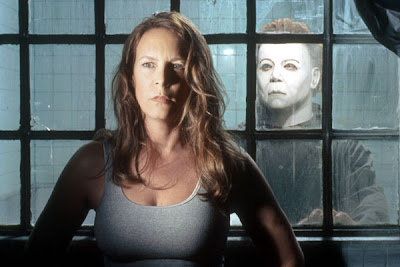 A lot of the talk surrounding Scream 4 has centered on how scripters Kevin Williamson, Ehren Kruger and director Wes Craven managed to cope with the challenge of adapting to a world that's changed so much since 2000's Scream 3. Some have complained that, despite its creator's efforts to incorporate such modern staples as the internet, webcams, smart phones and reality TV, that Scream 4 is still mired in the '90s.

What I haven't seen anyone remark on, though, is that Scream 4 lags almost a decade behind another slasher franchise that already made strides to change with the millennium. 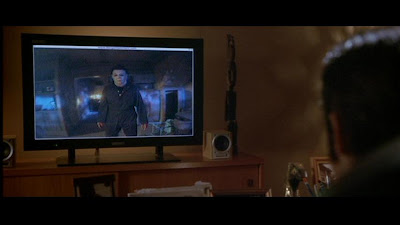 In 2002, Halloween: Resurrection was the first slasher film to embrace the internet culture, reality TV, and the advances in video technology. Producer Moustapha Akkad was surely spurred by the then-recent phenomenon of The Blair Witch Project (1999) to make the latest Michael Myers outing into something that spoke to the current vogue for the found footage genre as well as the burgeoning appetite for reality TV. Clearly, just a simple stalk and slash picture wouldn't cut it with young audiences anymore. And just for good measure, rapper Busta Rhymes was brought in to lend the movie some street cred. 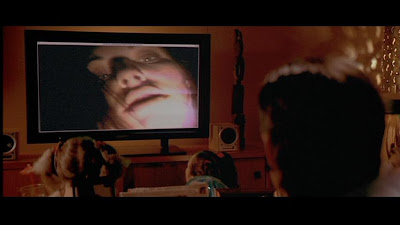 The Resurrection screenplay by Larry Brand and Sean Hood follows six college students who have been chosen to participate in an Internet reality show called Dangertainment masterminded by entrepreneur Freddie Harris (Rhymes) and his assistant Nora Winston (Tyra Banks). The students are sent into the long-shuttered boyhood home of Michael Myers, each equipped with a personal mini-cam that broadcasts their every move to the web. Their task as they spend Halloween night in the Myers' house is to look for clues for why Michael decided to go with "stabbing" as a career choice. 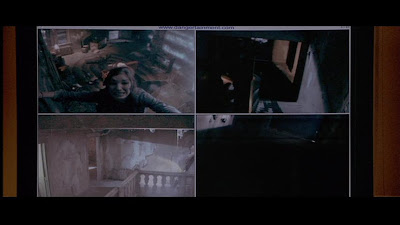 Sara Moyer (Bianca Kajlich) is the film's resident good girl (following slasher movie protocol, she has an irrepressible, smart-talking BFF - Battlestar Galactica's Katee Scakhoff as Jen Danzing) and it's her internet friendship with high school student Myles Barton (Ryan Merriman) that will prove to be a lifeline when the real Michael Myers returns home to put the danger in Dangertainment. Smitten with Sara, even though they've only communicated through e-mails, Myles ducks out of a bustling Halloween party to find a private room in which to follow Dangertainment's broadcast. Before long, the rest of the party decides to join him. 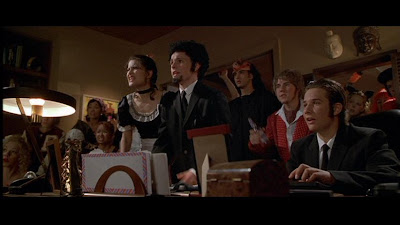 When it becomes clear that the mayhem they're watching is not staged and that Sara and her "co-stars" are lined up for a slaughter, Myles uses the advantage of the cameras set up throughout the Myers' home to feed Sara via her phone the information that she needs to survive. 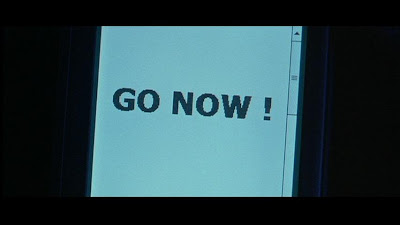 Brand and Hood's screenplay pulls more than a few boneheaded moves that director Rick Rosenthal (encoring from 1981's Halloween II) was apparently ok with. Killing off Jamie Lee Curtis' Laurie Strode in film's pre-title sequence set in a psychiatric hospital was likely exactly what Curtis wanted in order to end her obligation to the series but it's not ok that her plan to destroy Michael should involve setting up a rooftop booby trap that's so goofy it'd be laughed out of a Scooby-Doo episode. I mean, Laurie has Michael step into a rope noose which, when Laurie springs her trap, has him dangling in the air - upside down, no less! Ooooo!!

I don't know...maybe it's because Laurie's been kicking back in a mental hospital for a few years that this half-assed scheme seems like an effective way to dispose of Michael once and for all. I mean, hanging upside down does make the blood rush to a person's head and, as anyone will tell you, that's not pleasant. Assumedly, once Michael was at her mercy, Laurie planned to cut the rope or whatever and send Michael plummeting several stories to the ground. Would that hurt more than getting shot multiple times? Or more than being set on fire from head to toe? Because neither of those things were able to quite stop Michael previously, as Laurie ought to know. I mean, Michael fell off a second story balcony after Dr. Loomis emptied a full round of ammo in his chest and after that he just got up and walked away. Did Laurie forget that? Maybe her reasoning was that Michael isn't as young as he used to be so being dropped on his head from thirty, forty feet might do more damage than it would've before.

Honestly, though, even if Brand, Hood, and Rosenthal were all dumb enough to think this is how Laurie Strode should exit the series, you'd think that Curtis would've argued for something better - something that didn't make Laurie look completely moronic. Or maybe, God help us, this was the improved version. If this is what ended up being shot, I can only imagine what ideas were rejected along the way.

Besides having its most honored cast member go out like a fool, Rosenthal and co. allow the clownish Rhymes, while dressed to impersonate Michael, to verbally berate the real Michael (as Freddie believes it to be his cameraman in disguise). Did no one involved think that Halloween fans might be insulted by this? The error of having a C-list rapper get away with treating Michael like a punk is compounded when Freddie later unleashes a flurry of kung-fu moves on Michael and, again, survives to tell the tale. Is it any wonder that Resurrection is regarded as the worst in the Halloween series? 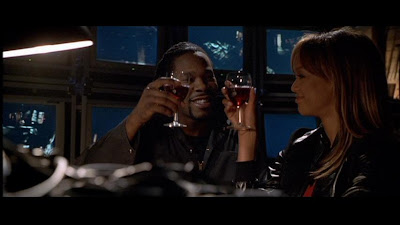 On the plus side, the notion of a group of viewers able to look on as Michael stalks his victims and being able to instantly advise Michael's prey on the best avenues for escape is a fitting high-tech analogy for the way that horror audiences have been shouting advice to the screen for decades. Unfortunately, constantly cutting back and forth from the Myers house to the group of kids at the party disrupts any chance for building suspense. 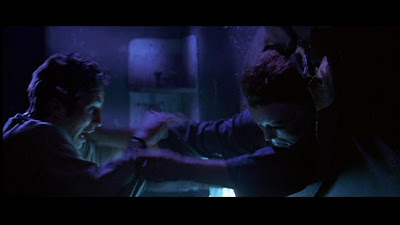 The one thing I do dig about Resurrection is Brad Loree as Michael Myers. Slasher fans tend to talk a lot about the different actors who have played Jason over the years but for some reason the different Michaels aren't discussed so much but I think that Loree was the best of the bunch since Nick Castle. He had the right body language and they designed one of the best masks for him. It's a shame that Rob Zombie cast Tyler Mane as Michael for his reboot as Loree was terrific. 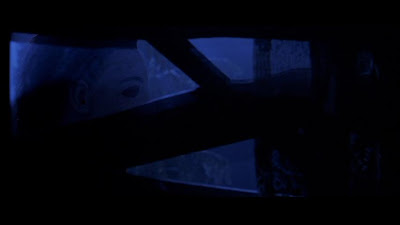 As terrible as Resurrection is, though, as it was the last "official" Halloween sequel I can't help but have some affection for it. For all its missteps, I thought it left the series in an interesting place. Laurie was gone and the Myers house had been burned to the ground. How the next film would've continued without those familiar elements to lean on had me intrigued but Rob Zombie's 2007 remake put a quick end to that.

Some would say that's just as well. I say that while the later-day Halloween sequels were mostly awful and not looking to improve, Zombie's remake and sequel replaced them with something just as bad, if not worse. Moustapha Akkad's son Malek, who had been producing the Halloween sequels with his dad since 1995's The Curse of Michael Myers, took on the responsibility of shepherding the series after Moustapha was tragically killed (along with his daughter) in a 2005 terrorist bombing in Amman Jordan but while Zombie's name was able to gave the series a commercial shot in the arm, I have to imagine that Moustapha would never have signed off on it.

The one thing Moustapha understood about the series and Michael Myers was that you couldn't lose the boogeyman element. Once you turned Michael into just a psycho, you didn't have much. Rhymes' describes Michael as a "killer shark in baggy ass overalls" and I prefer that succinct take on the character to Zombie's efforts to portray him as the product of a crappy upbringing.

Unfortunately, what Moustapha didn't understand was that the series didn't need to jump on the latest technology or trends. Incorporating webcams and high tech in such a clumsy, pandering way only made Resurrection appear more out of touch. That's the same boat that Scream 4 finds itself in now. Thankfully, Scream 4 isn't anywhere near the unholy debacle that Resurrection was. And for those who think Scream 4 needed to embrace cutting edge tech more than it did, Resurrection proved almost ten years ago that the only cutting edge that should ever matter in a slasher film is a sharp blade. 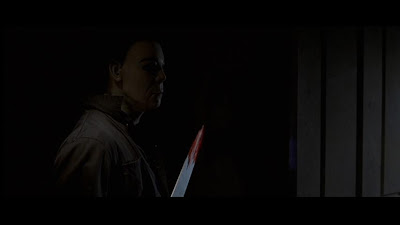 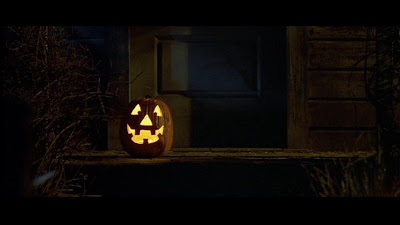 Great, fair review of the film. I agree with all your points, especially the one about Freddy berating Michael. One thing to have the guy go off on someone he thinks is just a cameraman. It's another thing to have Michael just WALK AWAY after that berating. What???

I have long thought that a different editing approach would have helped this film and I mean this:

Start the movie with the Dangertainment stuff and do it all as it is done (hopefully better, but I digress). Then, once the house is burned and most everyone is dead, have Freddy or a cop or someone mention that they just happen to be taking Michael to the same hospital Laurie is being held at.

END the movie with what was the beginning of this one. Michael stalking the halls searching for his sister, finding her, they tussle and instead of Laurie being stabbed and falling to her death, have her fall (stabbed or not, doesn't really matter) and when Michael goes down to her body she is gone, ala Michael at the end of the first Halloween. Michael looks around, Laurie is just gone and credits.

That would have been a hell of an ending.

Well said! You really did a fantastic job dissecting this film and examining why it is such a lackluster effort. I haven't seen it in ages and really have no desire to but it is clearly the low point in the franchise. But then, I like the Rob Zombie HALLOWEEN films so there's that.

Wings, nice thoughts about a possibly better approach to Resurrection. Too bad it'll never be implemented!

J.D., as strange as it seems to me, I know there's admirers of RZ's Halloween films out there! As author Danny Peary noted in his Cult Movies books, every horror and sci-fi movie ever made has some kind of devoted following - although I believe Halloween: Resurrection could be an exception to that!

Resurrection is the definite worst of the series. The RZ remake kind of has to be divided into 2 parts for me. The prequel part of it (w/ young Michael), I rate about 9/10. I thought it was a creepy, fitting back-story for Michael. For the remake part of it (when the new Laurie comes in), I rate it about 2/10. Most of this is because of how immature the new Laurie character was, which was a long way from the original.
The RZ sequel gets a 0.5/10. The half point is given to any movie in the series that doesn't have Busta Rhymes karate-kicking Michael out of a window or shouting, "trick or treat, mother******!" It gets no lower than that. Although it is pretty low to have Michael remove his mask, or not use the original theme.
Great posts this week!

Thanks - glad you're enjoying them! As for RZ's Halloween, maybe I'll revisit them one of these days - who knows?