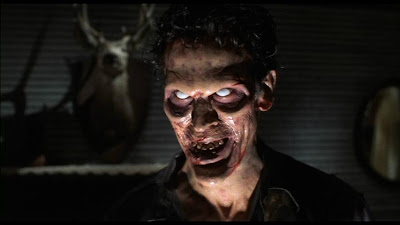 With Sam Raimi's Evil Dead II quickly approaching its 25th (!) anniversary, I wonder how it's perceived by young horror fans just coming to it for the first time. Is it still cool or is it passé? I do think it's very hard for any movie to still be considered hip after twenty five years. To be considered classic, ok. Hip is a little harder to manage. But for fans my age and the generation just below me, Evil Dead II is essential. It's a movie that's intractably ingrained in those who encountered it either first-run in theaters or on its earliest VCR releases or cable showings. But now it's closing in on the quarter century mark and I just don't know if it carries the same cachet with the under 20-crowd. But hell, it's got to. If it doesn't, that's just plain wrong. 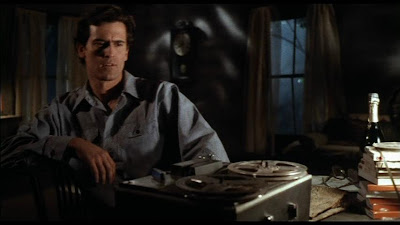 I will say one thing: there's no way that younger fans can appreciate just how different Evil Dead II was when it came out. My first viewing of it was at a midnight showing the weekend that it opened in my area. Going in, I assumed I was in for more of the sort of straight-up horror of the original. But when it turned out to be riotously funny, I was completely taken by surprise. None of the trailers or even any of the articles in the genre press had hinted at the shift in tone from the first film to the sequel. For some, the move toward comedy might've been cause to be pissed but the movie was so good, it would be churlish to fault it for not trying to duplicate the scares of the original. I've rarely laughed quite so hard at a film - and I'm someone who's predisposed to laughing their ass off. 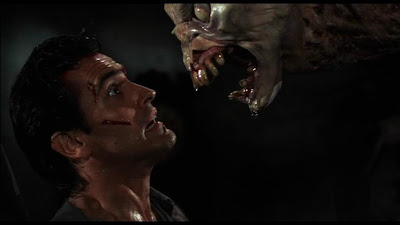 From a movie buff's perspective, one of the biggest downfalls of our internet age is that it's almost impossible to be surprised by a film anymore. If Evil Dead II came out for the first time today, it'd be common knowledge many months in advance that it was a horror-comedy. Hell, you'd hear all about it from a mainstream source like Entertainment Weekly. But in '87, even coverage in the pages of genre bible Fangoria didn't tip anyone off to the fact that Raimi had gone for laughs this time around. But being wholly surprised by Evil Dead II was one of the things that I liked best about it. 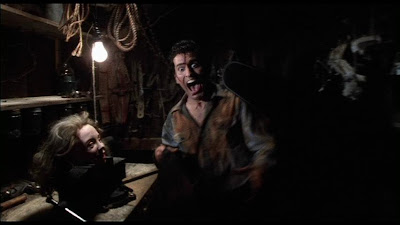 Thinking back to Evil Dead II makes me miss the days when cult films were discovered by fans a little at a time, gathering pockets of support here and there and building their following over the course of not just weeks but over months and even years instead of how films are now branded out of the gate as cult items on the basis of just a festival screening or two (and sometimes before they're even into production!). You know, Knights of Badassdom might end up being a great film, I don't know, but I feel like there's no excitement in discovering it for myself because it's pre-sold as a ready-made cult movie. Too many films aimed at the geek crowd today feel so safe in their sensibilities, like they're playing to audiences who are already in on the joke. It's like an easy layup and in contrast, Raimi made a full-court press, taking a real gamble by screwing with fan's expectations (most filmmakers doing a sequel to a balls-to-the-wall horror film would not risk ridicule by featuring a zombie doing a full-on stop-motion ballet). 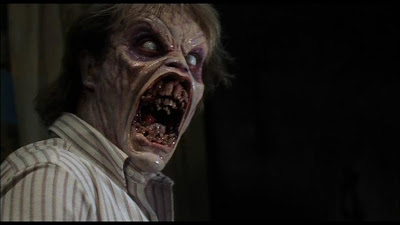 In the years since Evil Dead II, Raimi's hyperkinetic style has been adopted - if rarely equalled - by many other filmmakers, making it seem less unique than it once did, but yet the endless inventiveness of Evil Dead II still jumps off the screen. And the key to why Raimi's style works so well is that it only has the appearance of being unhinged. While Raimi sends his camera prowling, ricocheting, and slingshotting in every direction, underneath that gonzo style there's a serious attention to craft. Every angle, every edit is meticulously thought-out. Low budget genre filmmaking is famous for being done on the fly and under the gun but Evil Dead II is about getting it right and raising the bar.

The original Evil Dead was the work of a talented amateur but by Evil Dead II, Raimi had become a master filmmaker, using every tool at his disposal. Evil Dead II was still a micro-budgeted film compared to anything out of Hollywood but it looks far more lavish than it does crude. Sure, it might be easy to spot a giant tear in the crotch of the Henrietta suit and other gaffes here and there but Evil Dead II is still an accomplished piece of work. And the evolution of Bruce Campbell as an actor can't be underestimated either. His performance in the original was just shy of being outright embarrassing but in Evil Dead II he suddenly possessed a comic flair along with leading man chops. 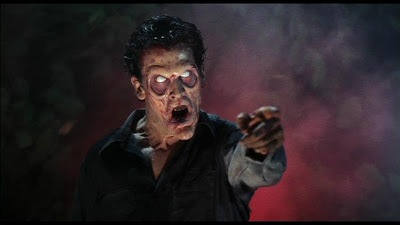 Raimi has stated many times over the years that horror was never his thing, that he didn't grow up as a fan, but ironically his films show much more affection and respect for the genre than those of many horror filmmakers today who constantly claim what hardcore fans they are. I mean, you look at the films of Rob Zombie and I don't care how many movies and directors he namechecks in interviews, this is a guy who misunderstands the genre so deeply that when he talks about being a fan, it should be regarded as a tongue-in-cheek assertion at best; at worst, a private joke. 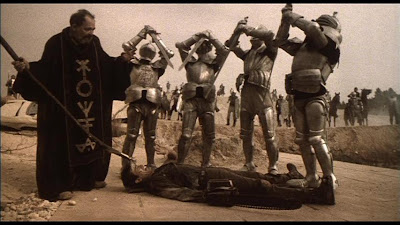 Early on in his career, Peter Jackson was considered the heir apparent to Raimi, making his name with splatstick efforts that were clearly indebted to Raimi's example. But while I love Bad Taste and Meet the Feebles (not so much Dead-Alive - for some reason that film just never did it for me), I don't think they've held up quite as well as Evil Dead II has with its high style, rampant silliness, and sense of cinematic precision. It's more than timeless - it's groovy. 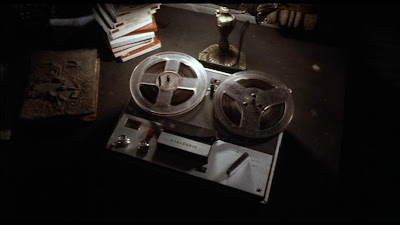 "And the key to why Raimi's style works so well is that it only has the appearance of being unhinged. While Raimi sends his camera prowling, ricocheting, and slingshotting in every direction, underneath that gonzo style there's a serious attention to craft. Every angle, every edit is meticulously thought-out."

And this is exactly why I prefer DARKMAN over his SPIDER-MAN films. Raimi instilled that gonzo, go-for-broke energy and inventiveness in DARKMAN that had seemed toned down in later films. It's also why I cherish THE QUICK & THE DEAD so much. He applied the EVIL DEAD II aesthetic to the western.

I think that EVIL DEAD II still holds up and is still my fave of the series (despite the endless insanely quotable dialogue in ARMY OF DARKNESS). Like yourself, I can imagine how it would play now if it was released. As you say, it would be ruined by countless interview reviews from advanced screenings, etc.

I also agree with you about certain films being calculated cult films. Some filmmakers are trying too hard to corner that market but you've still got films like DONNIE DARKO that come seemingly out of nowhere and turn out to be bonafide cult films.

Great write up on a great film. I love me some horror comedy and this is one if not the best in that genre. I do think the internet ruins a lot of movies today, but there are a lot of cult movies I still am learning about. The Room is a movie I didn't know about until a year or so ago and now it has reached cult status. I guess it depends how much you look around on the internet. Thanks for the article, good stuff.

J.D., I do like a lot of today's movies that are geared towards the cult audience but thanks to the internet and the rise of geek culture, it seems like even if the movies themselves aren't made in a calculating way, it's still a drag to have movies that once would've discovered in a more gradual fashion be subject to all kinds of advance hype.

Mummbles, thanks - glad you liked the write-up!

If Dead-Alive left you cold, try to track down the original, full-length version, Braindead. The excised material makes a HUGE difference and makes for a much better movie.