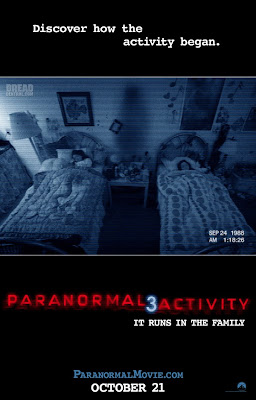 Even if I wasn't particularly fond of the Paranormal Activity films, I would still feel eternally in their debt for the fact that they drop kicked the yearly blight known as Saw from its Halloween perch and made the witching season safe for fun scares again. Sorry, but Halloween is for ghosts, goblins and the supernatural, not torture.

When Paranormal Activity became a hit in October 2009, I considered it cause for celebration. Even better was the fact that I actually liked the movie itself - I wasn't just grateful that it cleared the stink of Saw out of the room. Some would argue that the couple at the heart of PA were not the most sympathetic of duos but if I had a beef against every horror movie where the protagonists were not especially likable, I wouldn't like many horror movies. Personally, I thought Katie Featherston and Micah Sloat were fine (if a little too rich, but whatever) and I was in their corner enough to care what happened to them. But what I really liked about PA is how director Oren Peli had just one imperative in mind - to scare the shit out of the audience. So many horror films seem made by people oblivious to the mechanics of generating fear but Peli showed an innate understanding of how to build unease and deliver big payoffs.

Like The Blair Witch Project in 1999, Paranormal Activity proved that you don't need big special effects to deliver big scares. And unlike BWP (which I still consider to be brilliant), PA had more showmanship to offer, injecting more audience-pleasing jump scares into the mix. I love the rinky-dink, handmade quality to PA's brand of funhouse tricks (like the Ouija board that bursts into flames) and I love that they've carried that quality onto the rest of the series. It would've been so easy for this series to get off track and become too slick for its own good but PA 2 smartly stuck to what worked in the first film, embodied the same low budget aesthetic, and it did what I would've thought was impossible - allowed lightening to strike twice.

The quality control on that sequel was air tight and it proved that Peli didn't just fall ass backwards into Paranormal Activity's success. This was someone who really knew what they were doing and in his producer capacity, he's continued to guide his series well. Other filmmakers who claim to be such hardcore horror buffs could stand to learn something from him as Peli clearly knows more about what makes a horror film work than many fan-favorite directors who are superstars on the convention circuit and the blogosphere. But that's the subject of another blog post, perhaps.

Now the third PA is arriving in time for another Halloween and the first full trailer indicates that, once again, all involved have kept their eyes on the prize. Early reviews (like this), from a surprise showing at Fantastic Fest, confirm as much. I'll still be keeping my expectations in check, because that's only sensible, but based on the trailer I'm very game for whatever PA 3 has to offer.

Some like to bitch that the PA films don't show anything and that, you know, it's dumb for people to find them scary. Personally, it restores my faith in not just the horror genre but in audiences as well that these films do work. You'd think that modern viewers would be way too jaded for these simple spook house style films but I love the fact that there's enough people out there who appreciate this type of horror to make these movies huge hits. I love hearing an audience scream at a well-timed jump scare and to see rows of people fly back in their seats all at once. That's a part of the horror movie experience that's so essential to the genre's appeal. There's an often unappreciated art to making those moments happen and not every filmmaker can successfully pull them off. In the three decades or so that I've been watching horror films in the theater, I've seldom heard an audience reaction as loud as the shrieks that I heard accompany a key, kitchen-set moment in PA 2.

Movies that revel in atrocities, like the Human Centipede films or A Serbian Film, are not the future of horror. They're curiosities, at best. And I say that as someone who spent their adolescent years combing video stores for films like Cannibal Holocaust and Make Them Die Slowly. Maybe I'm just getting old and I don't need to fly in the face of society's norms as much anymore with my entertainment choices but when I hear that a movie features someone jerking off with sandpaper, it sounds like a waste of time to me. Things that go bump in the night, though?

When done right, that stuff never gets old.
Posted by Jeff Allard at 7:11 AM

One of the best things about Paranormal Activity is that it had its audience gladly staring at the screen for minutes at a time while nothing happened. I'm thinking specifically of the Ouija board scene. You actually begin willing something to happen, not to bring harm to the characters but because ultimately certainty trumps fear of the unknown, no matter how awful that certainty may be. I suppose The Vanishing is about the same human compulsion to find out at any cost.

Agreed. These films are entertaining and, surprisingly, have held up to multiple viewings. While I have no compunction after watching movies whose main intent is to shock and repulse, they don't frighten me like these movies do. I much prefer a touch of subtlety as compared to trying too hard.

Amen, my brother! I am right there with ya. I really enjoyed PA 1 and was surprised at how effective the sequel was. I am certainly looking forward to this new one.

I too prefer the paranormal and ghostly horror to the torture stuff, but I could not stand the PA movies. I don't see what was scary about the first one, you knew the 'big scare' moment was going to come whenever the camera stopped fast-forwarding. Then it would reshow the same thing on a computer screen 2 minutes later.

I felt the second was a little better in that the 'big scares' caught me off guard, and I also felt the ending in the basement was very suspenseful. Still not enough for me to truly enjoy the movie though.

I was probably just let down by the hype of the first one too. It's rare that horror movies get that much success, it's even rarer that a paranormal/ghost horror movie gets it. Then again, I still see nothing scary about watching a door slam shut. Just my opinion though. I was glad Insidious came along this year to show me that great supernatural horror isn't completely lost.

I really loved the first one and definitely appreciate Peli's ability to stir genuine fear and create such fantastic scares. But by the 2nd, it seemed like he began repeating himself. And I really took issue with the hokey 'family history' that the daughter concludes after doing an internet search. It was just completely unbelievable, so much so that it took me out of the experience completely.

Anyways, I'm still intrigued by the possibilities in this 3rd installment. The gents behind Catfish really seem to have a knack for pulling off the unexpected. I have a feeling we'll see some additional twists and turns in the mythology.

I agree! I enjoyed the first Paranormal movie, even though I did not rush out to see it. I am planning on seeing part2 soon, I think seeing it at home is scary in itself since the movies (at least the first one) takes place in a residence. I like the way they are going with the films, but I am not sure how much more then can go beyond this one, it seems to be a prequel.

Arbo, I agree. I think the common assumption is that audiences need to be constantly stimulated or else they get bored but PA proves otherwise.

Craig, you're not alone and yes, I'll see you at PA 3 in spirit!

Blue, I haven't rewatched either PA movie since seeing them theatrically but I'm glad (and not surprised) to hear they hold up.

J.D., I'm all for having a good time with a splatter movie but for real fear, I agree that gore just doesn't measure up to subtle scares.

sm_hayes, sorry the PA films aren't your spook house of choice but at least you dug INSIDIOUS, which was produced by PA's Oren Peli so you can say he had a hand in something you liked!

PoT, I didn't see Catfish but heard mostly good things about it. We'll see how they fare in the PA universe.

Mummbles, the new movie is a prequel. It's a curious way to go with these films but the people behind them seem to know what they're doing. I don't know if a 4th PA will be in the cards but then again, I never thought 2 would be a success so we'll see.

I am cautiously optimistic about this one. Didn't think the first was that great, but dug the second one. They definitely hinted that a prequel would happen eventually in part 2, but I'm a little surprised they decided to do it for the third one. As it stands, that means the series is in reverse order all the way through at this point. Perhaps as in part 2 there will be some scenes set in the present.

Great write-up! These movies and others of their ilk (Insidious, The Blair Witch Project, The Haunting) are my kind of cold October fare.
While I don't mind the 'Theater of Transgressions' stuff Saw and Hostel got my ire because they gained an undue reputation for going to extremes I felt they never even found on the map... it all felt like bait n' switch.

The PA movies have delivered the goods though.
The second one was a bit of a let down when it came to the exposition... but it's still a decent creepfest.
I hope the third one can get up out of that bit of ditch and keep me on edge again.

As much as paranormal activity makes me want to gag (found footage sucks), I have to agree with most of this. Saw just did not belong anywhere near Halloween and I do really hope the torture horror isn't the future of the genre.

These films are absorbing and, surprisingly, accept captivated up to assorted viewings.
Simran Possessed